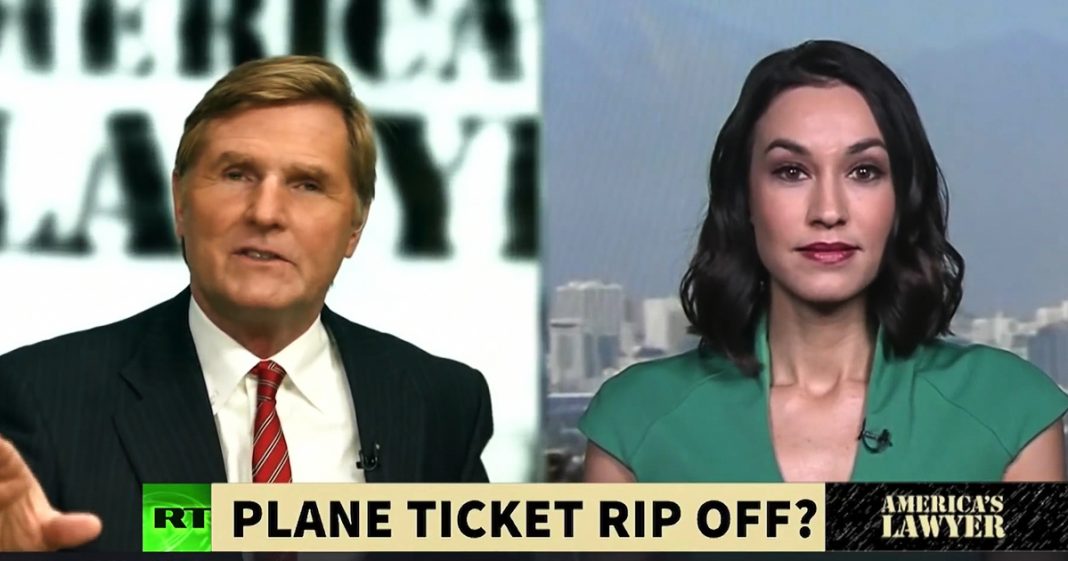 Via America’s Lawyer: Mike Papantonio talks with Brigida Santos about why Southwest Airlines decided to settle in a price fixing lawsuit.

Mike Papantonio: Southwest Airlines has agreed to pay $15 million to settle the class action lawsuit that they say they conspired with other companies to artificially increase ticket prices. They also agreed to cooperate and turn against their co-defendants by providing information that may show they, in fact, worked together to rip off customers in a very, very big way. Joining me to talk about this is correspondent Brigida Santos.

Brigida, what is this lawsuit alleging, and how did it come about? What a great victory, even though the numbers are small. I would imagine this probably is a $100 million kind of case. Give me your take on this.

Brigida Santos: This lawsuit alleges that the nation’s top four airlines, Southwest, Delta, American, and United, illegally conspired to hold down passenger capacity numbers in order to increase ticket prices. They did this at a time when fuel prices were typically lower. Now, the plaintiffs allege that this scheme dates back to 2009. In 2015, the Department of Justice began looking into it, and in 2016, that’s when all of these private, individual passenger lawsuits were consolidated into one class action lawsuit, Mike.

Mike Papantonio: You know, it’s funny, it’s always true. There is no honor among thuggery and thieves. In what ways will Southwest cooperate in admitting their guilt? In other words, they’re going to have to give something up. They’ve got to tell, “These are the people we committed this scam with. This is how we did it.” I’ve got to think there’s more involved here.

Brigida Santos: Southwest is the first defendant to settle, and they have agreed to pay that $15 million fine. Now, in terms of admitting guilt, however, a spokesperson says, quote, “We did not enter into any unlawful agreements with other airlines against which we compete vigorously. This settlement does not constitute any admission of wrongdoing, and we’re entering into it to avoid considerable distraction and expense of class action litigation.” They have on the record that they’re not admitting guilt. They’re paying this fine to avoid the hassle of it, but they do have to, as you said, turn against the other three airlines, and provide a full account of the facts that could help build a case against the others. We don’t know what they’re going to say, but I’m sure they’re going to be giving up as much information as they can here, Mike.

Mike Papantonio: Yeah. You know, I’ve been handling these kinds of cases for so long, and it’s always the same story. “Yeah, we’re going to pay the $15 million, but you know, we really didn’t do anything wrong. Oh, by the way, we don’t want to admit anything.” When we settle cases on our end, we don’t take that route. Part of the settlement should make them have to agree to the fact that, A, they did something improper and illegal, and B, they should have to turn over evidence against other people who participated. This line, it’s almost like the first corporate line that comes out. “Oh, we just paid because we just didn’t want to be bothered with all that.” That’s nonsense. No company gives up $15 million unless they’ve done exactly what they’ve been accused of.

A Politico report says a series of airline mergers began in 2008. How did those mergers benefit the airline companies, and is it possible that those mergers empowered companies to pull off this scheme, or any type of scheme that adds profits to their company at the expense of consumers? What’s your take on that?

Brigida Santos: These mergers allowed these four companies being sued here to basically control 80% of US commercial air space, while also eliminating unprofitable flights to any mid-sized or smaller hubs at the travelers’ expense. Of course, when you have mergers, it takes away competition, which ultimately could empower these companies to come up with a scheme, because let’s say one executive from one of these airlines only has to now convince executives from three other airlines to get behind this scheme, as opposed to many others. It’s very possible that mergers like this empower them to make these bad decisions.

Mike Papantonio: Well, you know, Brigida, you know there are all types of scams. I don’t know if you’ve done this. I’d recommend to viewers, watch this next time. Go online and say, “I want to buy a ticket,” in a specific route. Wait 15 minutes. Don’t buy it the first time, and then go back on 15 minutes later and watch the number continue to climb. What they do is they figure out, “This person’s made an inquiry. We can probably close this deal, but at the same time, we’re going to raise prices.” This is what all the companies are doing right now. It’s infuriating. I mean, you’re on at 1:00, and the price of a ticket is $500. You’re on at 1:15 and the price of the ticket has doubled. This is something that we see the airlines doing. That’s the next thing that’s coming down. It’s probably part of what we’re talking about here, but I think there’s a whole standalone case there.

Look, ripping off travelers by raising ticket prices is nothing new. We know that. Can you talk about the case where airlines were ordered to pay more than a billion dollars after they were caught conspiring to jack up prices to cover their losses? Talk about that, Brigida. You covered that.

Brigida Santos: Yes. We have seen this before, and in fact, between 2000 and 2006, 21 airlines came together to save a dying industry that was deeply in debt by colluding against the public, and raising cargo fuel charges, and inflating passenger fees as well. In some cases, fuel charges went up by 1,000%. Now, they duped the American public out of hundreds of millions of dollars, and they were ordered to pay $1.7 billion in fines. Now, this only came to light because executives from two airlines, Lufthansa and Virgin Atlantic, came forward to the Department of Justice admitting this. If they had not admitted to doing this, then it would likely be continuing, but even with that ending, we now have this newer case, Mike, so we’ve seen this before.

Mike Papantonio: Yeah, and we’re going to see it again and again, til people continue going after these people. I mean, it’s a criminal con. It’s criminal conduct, for goodness’ sake. All elements of fraud exist here.

Look, very quickly, a startup recently tried to combat high airfare prices by monitoring Southwest price and alerting consumers when prices dropped. Southwest has now sued that startup company, because they’re giving people notice of when they can buy the best tickets. Can you tell me what the status of that lawsuit is?

Brigida Santos: That lawsuit is ongoing. It’s a company called Southwest Monkey. Two guys started this company, and they built a website called SWMonkey.com. Consumers could pay a $3 fee in order to get email alerts anytime Southwest reduced their prices, or reduced their mileage requirements for tickets. Now, Southwest does allow its consumers to re-buy tickets at a lower price, and save the difference as a travel credit for future travel. They already allow people to do this. These guys were just alerting customers easily, compiling that data for them, and now Southwest says it has cost them $5,000. This was a program that was only in place for a small amount of time before they were told to shut it down. Really, the interesting question about this case is that it’s bringing up the issue of whether airlines’ airfare is public information or not, Mike.

Mike Papantonio: Just another case of guys dressed up in suits who are still criminals, no matter the fact that they don’t look like criminals. Thanks for joining me, Brigida. I appreciate it.