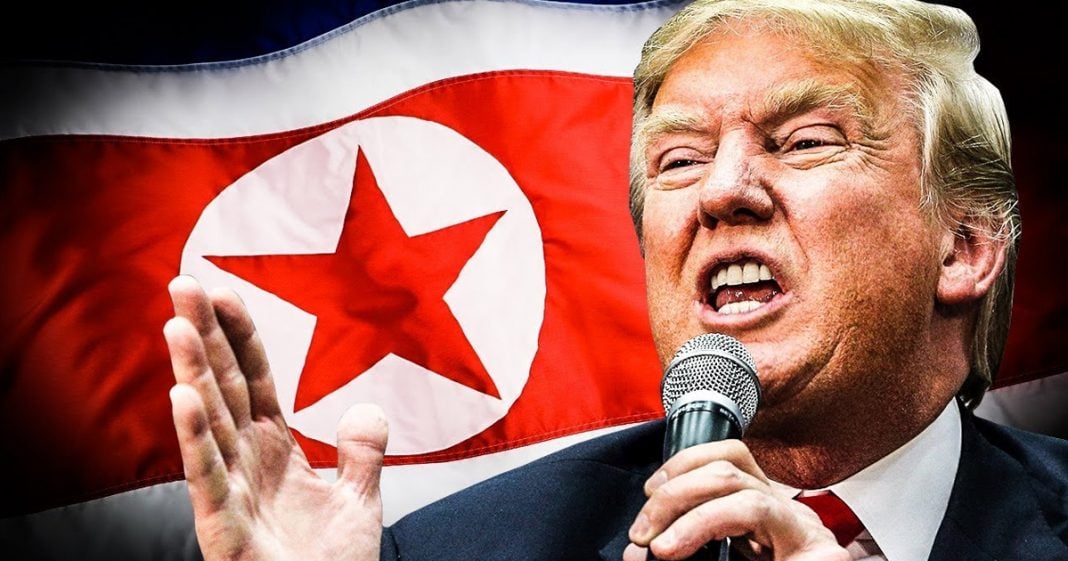 Trump’s national security adviser and others inside the White House are losing their patience with the Department of Defense because the Pentagon is refusing to give the White House a full rundown of the military options for North Korea. The Pentagon says that they don’t want to give him options because they fear he’ll actually use them, possibly one of the first times that the Pentagon wants to AVOID a military showdown. Ring of Fire’s Farron Cousins discusses this.

National security advisor to Donald Trump H.R. McMaster is growing furious at the Pentagon, so are other Donald Trump advisors. They’re getting furious with the Pentagon because they’re refusing to present the president with military options on how to deal with North Korea. Now, the reasoning coming from the Pentagon is because they are afraid if they give Donald Trump any kind of military options for dealing with North Korea, he’s going to use them. Now, the way US military policy works is that basically anytime there is any kind of skirmish or problem with any other country, the president is usually presented with a whole list of options on how to deal with it, which often includes military options even when the president has no intention whatsoever of releasing the military into those areas.

Usually, they result in sanctions or something like that. This Pentagon that we have now that’s being run by people that Donald Trump put in there himself, they don’t trust this man enough to even tell him that firing a single weapon is an option because they firmly believe that that is what he would immediately go with. They understand that Donald Trump isn’t the kind of guy that wants to deal with diplomacy or sanctions. He’s not smart enough to really understand those. Instead, they’re not giving him any options because they know that the second he sees fire a missile on that list, that’s probably what he’s going to go with. This once again as so many other stories do goes back to Donald Trump’s competency to even serve as president of the United States.

If the Pentagon does not trust this man to be the commander-in-chief of the US military and oversee all US military operations, why should he still be in office? To me, that seems like a bigger part of this story that few people who have reported this are talking about. If Donald Trump can’t be trusted by our own military and yet he’s supposed to be leading them, why is he there? Why is he still the president? Why are Republicans who are allegedly so pro military and Democrats hate the military so much, why are they letting a man that the military doesn’t trust, that they don’t like, and that they’re not even going to present him and do their jobs because they don’t trust him? Why are they letting him stay there instead of invoking the 25th amendment and forcing Donald Trump to prove that he is competent, which is something that we know he wouldn’t be able to do?

This on the Republicans here. The Pentagon, and this is almost shocking as well, for once doesn’t want to go to war in this situation. This is an organization that jumps at the chance to go war anytime they can, but even now they’re saying look, this is a bad idea to go over there and start firing missiles and guns. We’re not even going to tell him that we can do that because we know that if we do, we’re going to have to start packing up our young men and women and sending them over there across the Pacific Ocean to die because Donald Trump only wants to show people that the United States has more fire power and that never ends well for this country.