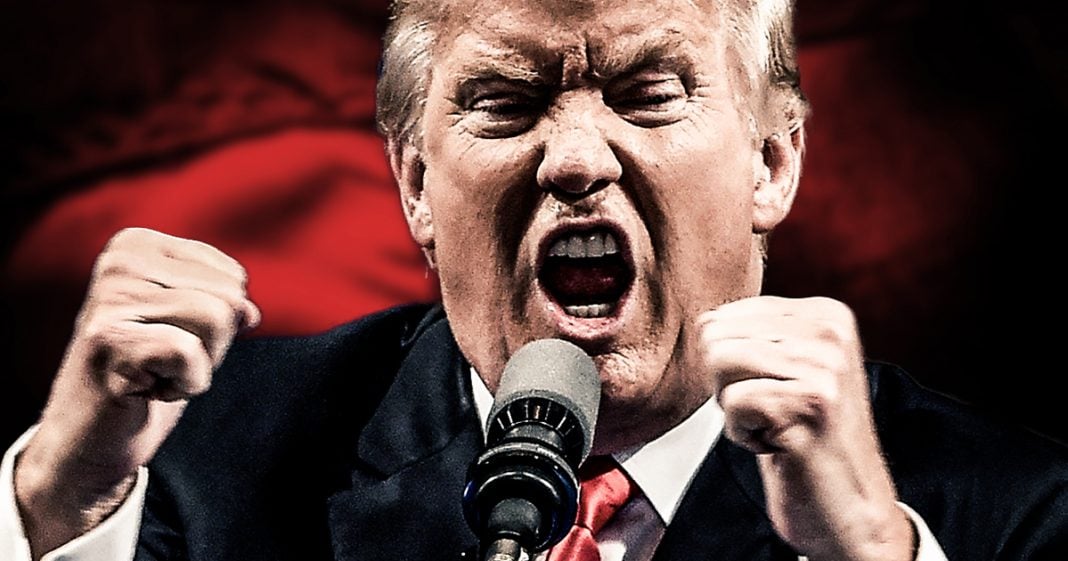 According to recent reports, Donald Trump is furious that he can’t just have “his guys” at the Department of Justice do his bidding whenever he wants them to. But unfortunately for Trump, not only does that raise suspicions that he might be trying to cover up criminal activity, but the people at the Justice Department are there to protect and preserve the laws of the United States, not to do the bidding of a tyrant. Ring of Fire’s Farron Cousins discusses this.

Recently, the Washington Post reported that Donald Trump is upset about the fact that he can’t just have his guys at the Justice Department who are willing to do his bidding.

Now, this was obviously in response to the recent reports that Donald Trump had considered firing people like Robert Mueller, Andrew McCabe, and whoever else at the Justice Department that he just didn’t agree with, or didn’t like what they were doing.

And Donald Trump is upset about that, according to the two people that the Washington Post spoke to, who claim that they heard the President make those particular remarks. Now, I don’t like reporting on this person says that this other guy said that he witnessed somebody say this thing. However, based on what we have seen so far from the President, and from past reporting, I do personally believe that this story has merit to it.

No Justice Department employee has ever been hired, or should ever be hired … I’m sure they have been … to do the President’s bidding. What they’re there to do is to protect the American public. That is the job of the United States Department of Justice, but Donald Trump seems to think that their job should be to have his back, to do whatever he says, and if he says, “Fire this guy for me,” they should jump and do it immediately, regardless of the consequences.

But at this point, that’s what Donald Trump’s own team is trying to protect him from doing, because maybe nothing will come of this investigation, but if he goes around firing every single person who had to investigate him, it’s only going to serve to make him look more guilty, and that’s why his staff is trying to tell him, “Please stop threatening to fire people. That’s not how the government works.”

And that brings us to the bigger issue here. Donald Trump thinks he’s still hosting The Apprentice, only from the White House, instead of the board room. He thinks that he has the authority to just fire anyone he wants, because their job is not quite what he wants it to be.

But again, that’s not how things work in the Federal Government. If you go around and just start firing everybody willy-nilly, you know, “You’re gone. you’re gone. You’re gone. You’re gone,” those are jobs that are actually vital to the safety and protection of people here in the United States, not exactly a position where you go around and just fire half the room, and then suddenly you realize, “Oh, crap, there went my entire opioids commission, because I wasn’t paying attention.”

Again, Trump thinks he’s still part of a reality show, when in reality, he’s supposed to be running one of the most prestigious, one of the most powerful countries in the world, and instead, he’s turned it into a giant set of a reality TV show, of which he is the star. And if you want to be a contestant on it, which also means a government employee, then you’d better be loyal to him, and not to anyone else, not to the rule of law, not to the United States of America, but loyal to Donald Trump, because that’s the only way you’ll win this reality show competition that the United States has become.