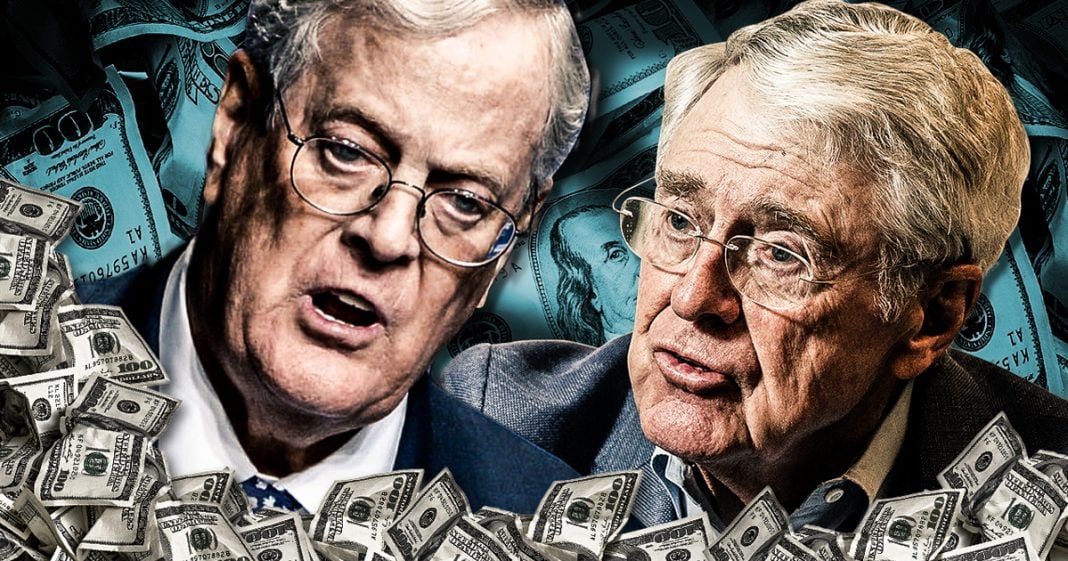 Polls across the board show that the Republicans are in for a VERY bad year, and that they are at risk of losing both the House and the Senate in the midterm elections towards the end of this year. But the Koch Brothers believe that they can save Republicans by pouring $400 million in corporate money into their campaigns. But as Ring of Fire’s Farron Cousins explains, that same Koch money that is supposed to “save” the Republicans is exactly why the public hates them.

Republicans in the House of Representatives, and to an extent those in the Senate as well, understand that they’re probably going to get their asses handed to them in this year’s midterm elections. Paul Ryan has considered maybe not even running, maybe just retiring in 2018, because he understands that he is not only going to lose his speakership, but there’s a very good probability that he would actually lose his personal reelection campaign to Randy Bryce, the Iron Stache, the working class guy who is running against Paul Ryan and who’s doing a damn good job running against him. But, don’t worry. Republicans have a hero. They have their own superman or I guess I should say supermen waiting in the wings to swoop in and save them from their imminent peril that they find themselves in. Those supermen happen to be Charles and David Koch.

This past weekend, the Koch brothers announced that they’re going to be spending $400 million this year to help Republicans keep control of the House of Representatives and the Senate. Here’s what’s funny about this story. Republicans are not very bright creatures, at least not the ones that we have elected to Washington, D.C. I know they might seem smart sometimes when you see them on TV. They may look soft and cuddly but believe me they’re actually pretty dim and quite dangerous. See, they don’t seem to understand that the reason the public absolutely hates them right now is pretty much because of things like the fact that they accept hundreds of millions of dollars from people like the Koch brothers and then they go to D.C. and they do the bidding of people like the Koch brothers. If they think that the solution to that is to take a couple hundred million more from people like the Koch brothers, then they deserve everything that’s going to happen to them in the 2018 midterms.

If they think that $400 million from the Koch brothers is going to make any difference at all in these midterms, they’re sadly mistaken because that also means that they don’t understand why the American public absolutely hates them. If you ever want to fix a problem, the first step is understanding why you have that problem in the first place but that’s not something that these dimwitted Republicans in Washington, D.C. are capable of figuring out.