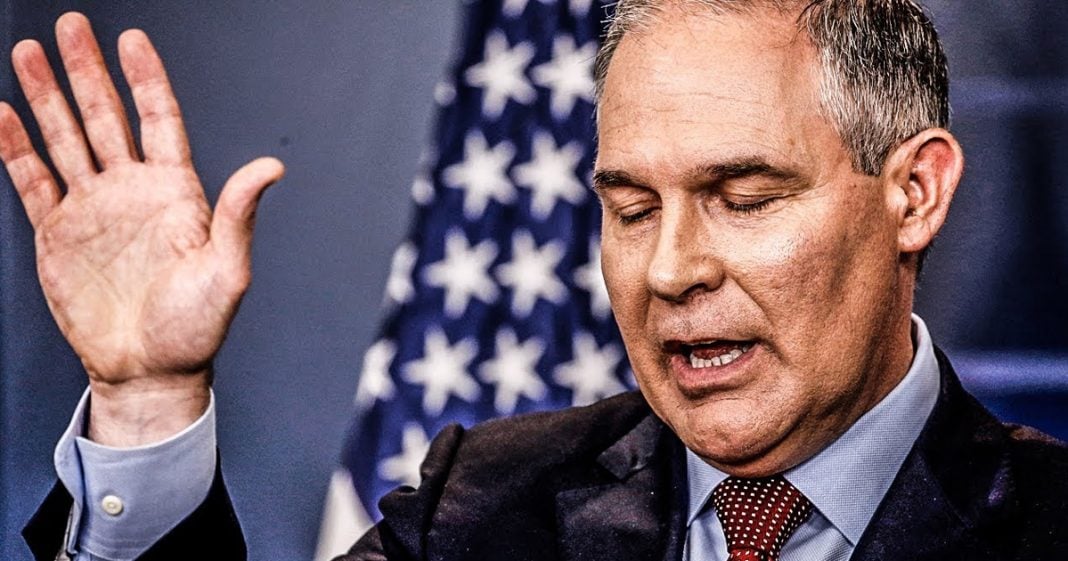 According to recently-uncovered emails, Scott Pruitt, the head of the Environmental Protection Agency, personally ordered the removal of the phrase “climate change” from the agency’s materials. This proves that the move was not simply a change in policy by the agency, but that it was a political directive given by a man who should be removed from office. Ring of Fire’s Farron Cousins discusses this.

Well, we found out this week, by a Freedom of Information Act request by the Environmental Defense Fund, that those actions to get rid of climate change, get rid of climate science were personally directed by EPA Director, Scott Pruitt. The head of the agency is the one who made the decision to get rid of climate change from their websites. Why? Not because he doesn’t necessarily think that it’s happening, he probably doesn’t I assume, but that it’s bad for the oil industry. It’s bad for the fossil fuel industry. So we have to get this off of our official website because I owe my career to those assholes who helped me win my first job back in Oklahoma. That’s what’s happening at the EPA today. Scott Pruitt claims that he did this out of some you know, just science changes, we gotta change our policy and our wording, that’s why we’re taking this off. But he actually did it because he has a political agenda. He has politicized the entire office of the EPA to benefit the fossil fuel industry. That’s what’s happening.

So this week, Scott Pruitt had to testify in front of the Senate about travel he made, that was not related to work but he billed the taxpayers for it. They’re asking him about the climate change issue and why he’s taking it off their website, but since Republicans control the Senate, we’re not gonna get any real answers, we’re not gonna get any real action. But here is the thing, Scott Pruitt is a political hack. He is an industry hack and he does not deserve to be in charge of environment policy for the entire United States. He does not want to address climate change, he doesn’t even want to acknowledge that it’s real, he doesn’t want people to know that it’s happening, he doesn’t want people to be able to go to his agency’s website and find information.

That is not the kind of person that we need running this agency, but it is exactly the kind of person that we should’ve expected Donald Trump was gonna put into power. Because this is a guy who cares more about industry profits, more about appeasing Donald Trump, than he does about actually enforcing the laws of his agency, that the Supreme Court tells us he’s legally required to enforce. With any luck, within the next few months, Scott Pruitt will be removed from office. Not that we’re gonna get anybody better than him, but at this point, I don’t think we could get anybody worse than Scott Pruitt at the head of the EPA.