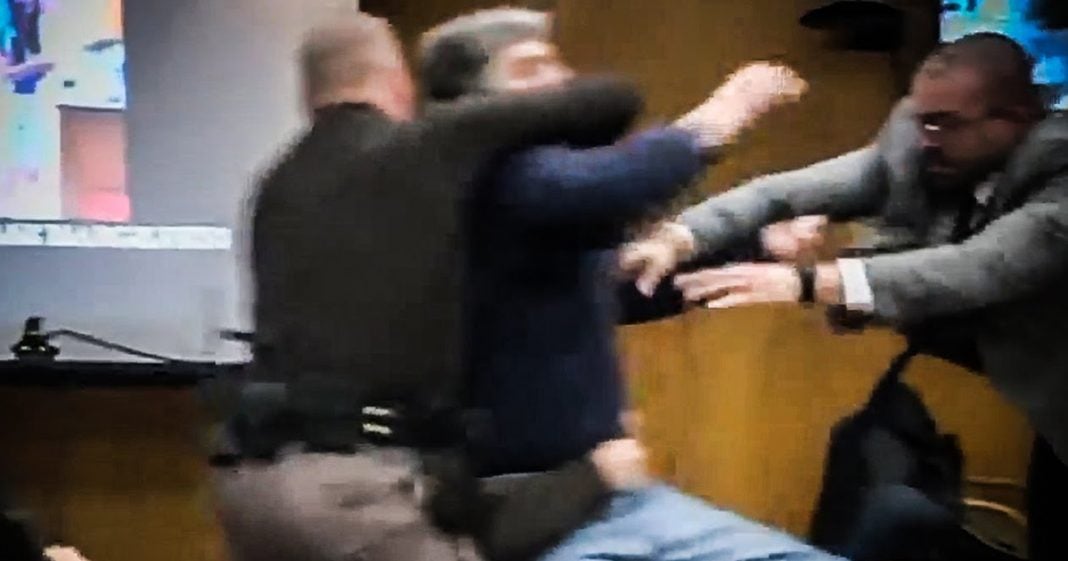 Randall Margraves, the father of three of the sexual assault victims of Dr. Larry Nassar, appeared in court during the doctor’s sentencing hearing where the judge allowed him the opportunity to speak. The father, understandably outraged at what Nassar had done to his daughters and so many others, attempted to attack the doctor before being subdued by officers. Ring of Fire’s Farron Cousins explains why Mr. Margraves actions are understandable given the circumstances.

During the sentencing hearing for Larry Nassar the doctor with USA gymnastics in Michigan State University, one of the fathers of three of the victims was given the opportunity by the judge in the case to say a few words, speak his mind basically before the sentence was handed down.

It didn’t go pretty much as the judge had planned. Just take a look at what happened here in that court room.

While it’s very hard to condone the behavior of the father there, I think a lot of people would agree that you understand it. Again, we can’t have that kind of behavior in the courtroom, as the judge pointed out with his language, but I don’t fault him for it.

That’s one side of the stories that we don’t see, because it doesn’t just affect the victims, it affects their entire families. This man’s reaction, though harsh was one that I feel many of would have had in the exact same situation, if that was our children, or our sisters, or mothers, or brothers, or fathers, or whoever.

A lot of us would have done the exact same thing. So, he may or may not be sentenced for his behavior, but let’s hope that he doesn’t. I don’t think this is a man that we need to make an example of. He was furious, this Dr. Nassar kind of destroyed the lives of his daughters, of his family, gave them scars that they’re going to lie with for the rest of their lives, and that’s a reaction that a lot of us would have had in that exact same situation.

Nassar is going to get what he deserves, but I don’t feel like the father that lashed out there really deserves much more than maybe a few hours in a holding cell to cool down, then he should be allowed to leave.