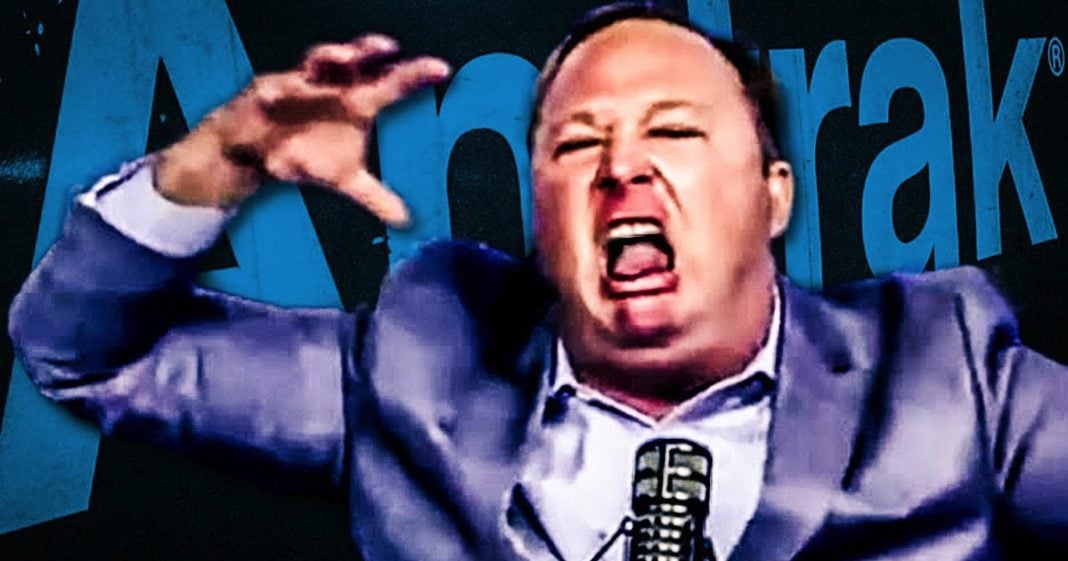 Alex Jones and his conspiracy theory brethren wasted no time on Wednesday to try and paint the crash of an Amtrak train carrying GOP members of Congress as a failed assassination attempt against Republican members of Congress. This kind of discourse is poisonous for America, as Ring of Fire’s Farron Cousins explains.

On Wednesday, a train carrying GOP members of congress crashed into a garbage truck, killing one person, injury a whole lot more. And almost immediately after this train wreck occurred, conspiracy theorists online took it and ran with it, and tried to tell us that this train crash was some kind of failed assassination tempt against Republican law makers.

Fast Company pointed out that YouTube, if you went on there and did a search for GOP train crash, the first video that came up was Alex Jones doing a live stream, talking about the fact that this was obviously some sort of planned attack against Republicans. The other videos that followed that were conspiracies, talking about a failed assassination attempt against Republicans.

That kind of rhetoric coming from people like Alex Jones and all of the other online conspiracy theorists is dangerous, and potentially deadly, for the United States. We have seen too many instances in just the last 12 months of people who buy into these crazy right wing conspiracy theories, and then decide that they’re going to attempt to kill people, because of these conspiracy theories.

Pizza gate, the guy who wanted to go shoot up CNN, those are real world consequences of crazy people’s talk, and that’s what we’re seeing right now. This was a tragic accident, and to be honest, it was an accident that, yes, it could’ve been avoided, and Republicans are partly to blame for why it even happened in the first place. In the last few years, train crashes in the United States, both passenger and freight, have seen an increase in the number of accidents that have taken place here in the United States.

Why? Because we’re deregulation the rail industry. We’re allowing trains to travel at almost twice the safe speeds that they were previously allowed to travel. We’re not keeping up with railway integrity, as far as the infrastructure is concerned. We have reduced regulations on how many hours these people can drive, how fast they can go, how much they can haul, how fast they can go around turns, things like that. We’re loosening it, and making it more dangerous, and that’s why accidents like this are happening.

And believe it or not, the rail industry lobby happens to be one of the most powerful in Washington DC. You may not think that the train lobby is such a big thing today, but it actually is, and they’re spending millions of dollars every year, because it’s an industry that most people don’t pay attention to. And Republican law makers, and even some Democratic law makers understand that they can deregulate the hell out it, and nobody’s going to pay attention.

That is, of course, until there’s some kind of tragic accident, and then the attention gets deflected away because you have these psychos online, people like Alex Jones, trying to tell us that this was some kind of assassination attempt, to take out Republic law makers.