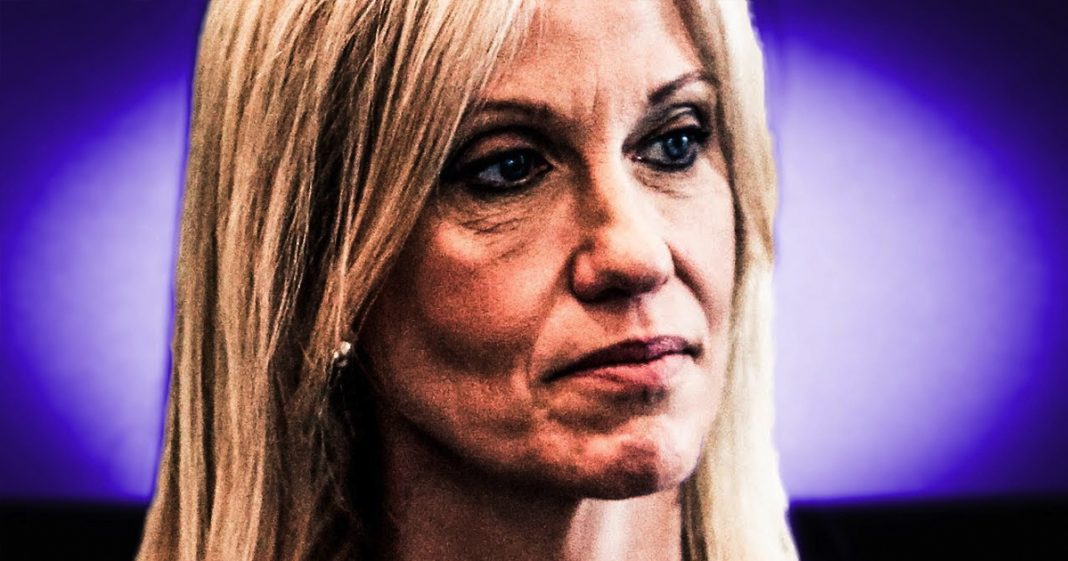 Kellyanne Conway, the woman who coined the phrase “alternative facts,” is angry that fact checkers in the United States are actually doing their jobs and telling us when Donald Trump is lying. She claims that Americans are their own fact checkers, and if that’s the case, this administration should be very, very worried. Ring of Fire’s Farron Cousins discusses this.

White House counselor Kellyanne Conway has absolutely had it with the liberal media and especially the liberal fact-checkers that keep calling out her boss for his constant lies. On Wednesday, following the State of the Union address, Kellyanne Conway appeared on Mark Simone’s radio program in New York, where the two of them talked about the fact that those fact-checkers clearly have some kind of bias against the president.

Listen to what the two had to say about it:

Mark Simone: Hey, Kellyanne Conway. Here’s something you guys gotta work on. Liberals seize more and more control of the infrastructure. They control the newspapers. They control the networks. In the last few years, they’ve taken total control of the fact-checking sites, and they’re very slanted, factcheck.org and all of them. The Washington Post, the New York Times, I mean obviously there’s not a really good fact-checking site that doesn’t have a lot of bias in it.

Something’s gotta be done about that.

Kellyanne Conway: Yes, fact-checking the fact-checkers. It’s not a bad idea, only because … the people will say, “Well, the facts speak for themselves!” Right, but you’re selecting what you think should be fact-checking, so this industry was not at a fever pitch when Barack Obama was president.

People will say, “Because he didn’t lie!” Okay, well. The big one was “You can keep your plan, you can keep your doctors,” right there with my eyes closed, not even thinking about it, I came up with two whoppers. There had to be more.

And so, you know, you’re right though. It’s not just academia. It’s not just the mainstream media. It’s not just so many organs and organizations that are slanted toward this president and toward his agenda, but now the fact-checking industry. But look, America are their own fact checkers in terms of whether they believe the tax cut, the big lie that it’s not going to happen.

They know if their 401ks are fatter, if their retirement savings, their pensions, their kids’ educational funds have increased or decreased.

That’s right, ladies and gentlemen, the woman who coined the term ‘alternative facts’ believes that fact-checkers are just being mean to the president because they don’t like him.

They didn’t fact check Obama, according to what she just said in that clip, and he lied all the time! So why, suddenly, are these liberal fact-checkers just now going after the president of the United States? Well, here’s the thing.

Pretty much any politician that says anything publicly is fact-checked these days. We have fact-checking websites. We have newspapers that have entire departments devoted to fact-checking what politicians say. And occasionally, a Democrat says something that gets rated as a pants on fire type lie.

And I know it can’t be easy to have to go out there every day and defend a president who you know is lying through his teeth every time he opens his mouth, but that’s the job you chose and I guess that’s what you have to do.

Meanwhile, you also say that Americans are their own fact-checkers. Well, if that’s the case, then your guy, your boss, your president is in a hell of a lot more trouble than he would be if it was only those newspapers doing the fact-checking, because a majority of people in this country do not believe a word that Donald Trump says and they do not believe that he is trustworthy, and they don’t even believe that he is a good role model for their children.

If I were you, I would leave that job up to the actual fact-checkers, because if you’re putting it on the American public, then you’re in bigger trouble than you think.