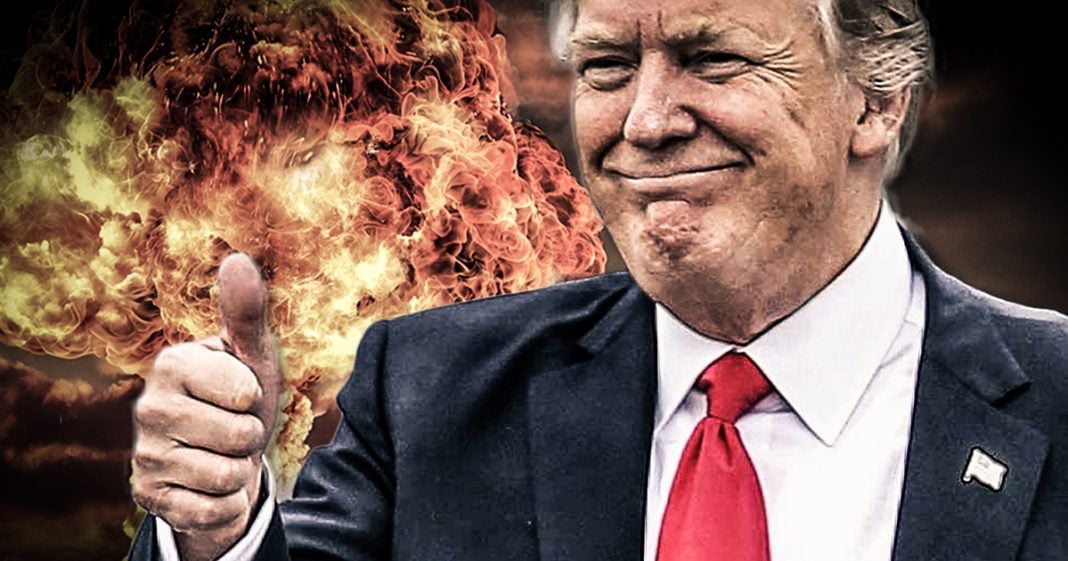 A recent report from The Washington Post says that those closest to Donald Trump claim that the President believes that an attack on US soil would certainly help his Party’s chances of winning the midterm elections this year. Not only is this a dangerous way of thinking, but he’s also probably correct in his analysis – it worked for George W. Bush and it could absolutely work for Trump. Ring of Fire’s Farron Cousins discusses this.

According to a recent report in The Washington Post, Donald Trump has been talking with his advisers about how great it would be if there were some kind of attack on US soil, because it would help Republicans in the 2018 midterm elections. According to those interviewed by The Washington Post, Donald Trump has been talking and saying think back to the 20 … 2002, excuse me, midterm elections. Prior to 9/11 it was already expected even though George W. Bush had been in office for seven months at that point. It was expected that the Republicans were going to get hugely defeated in 2002 and then 9/11 happened. And once that happened, George W. Bush’s approval ratings went through the roof and because of that Republicans maintained control of the House and Senate in the 2002 midterm elections. And Donald Trump believes that should something like that happen here in the United States today, it would be great for the Republican Party heading into this year’s midterms where, most likely, according to all available evidence, they’re going to get their asses handed to them.

Now let’s start off by saying I do not believe in any way that this means that the Trump administration would try to orchestrate some kind of attack here in the United States. I don’t think they are legitimately hoping something like that happens. I don’t want to get drawn into any conspiracy theories and false flag nonsense. That’s not what this is about. What this is about is Republicans being absolutely terrified about voter backlash in 2018. And the funny thing is they don’t even understand, still, why voters are so pissed off at them. Donald Trump for the life of him can’t figure out why people don’t like him. Republicans in the House and Senate, they simply don’t understand why people don’t like them or their policies. And so maybe if there has to be some big unifying event to bring everybody together to rally behind the Republicans, that would be the only way they would be able to win an election.

Well guess what? Not only would that same scenario not be able to play itself out today in 2018 as it did back in 2002 because the country is just a little too divided on issues that actually matter, but Republicans need to understand that the voters dislike them. They have approval ratings in the teens because they understand what Republican policies are all about today. George W. Bush didn’t have enough time to enact enough policies prior to the 9/11 attacks for people to hate him for his policies. They hated him for his personality, that can always be fixed. But your policies, the horrible decisions that you make while in office, you know the tax cuts for the top 1%. You know telling us that immigrants are the enemies and we’ve got to stop them by putting up massive walls or else they’re going to come over here and kill us. Spreading hate and division, which is what Republicans and Donald Trump are doing today. That’s not something that’s easily fixed and that’s not something that would be fixed with a domestic attack here in the United States. They have made this bed for themselves. They have made the voters hate them.

It’s not just because of personality. It’s because of what they stand for. Because American voters are not as easily fooled as Republicans like to think that they are. And more and more people every day are waking up to the reality that Republicans only care about that top 1% and the bottom 99% as long as we can dupe you on a few issues they don’t care. They’re going to let these corporations poison our air, our water, tank our economy, get away with not paying taxes. And when they bring that money back to the United States just reinvest it into their own stocks so that we don’t see any trickle down. They kill us on the job with lax regulations for worker protections because we don’t matter. In the eyes of Republicans, only that top 1%, the major corporations with billions of dollars, and the US citizens with more than $10 million in the bank, those are the only people that matter to Republicans. The other 99% are waking up to that reality and they’re going to make Republicans pay for it in this year’s midterms.