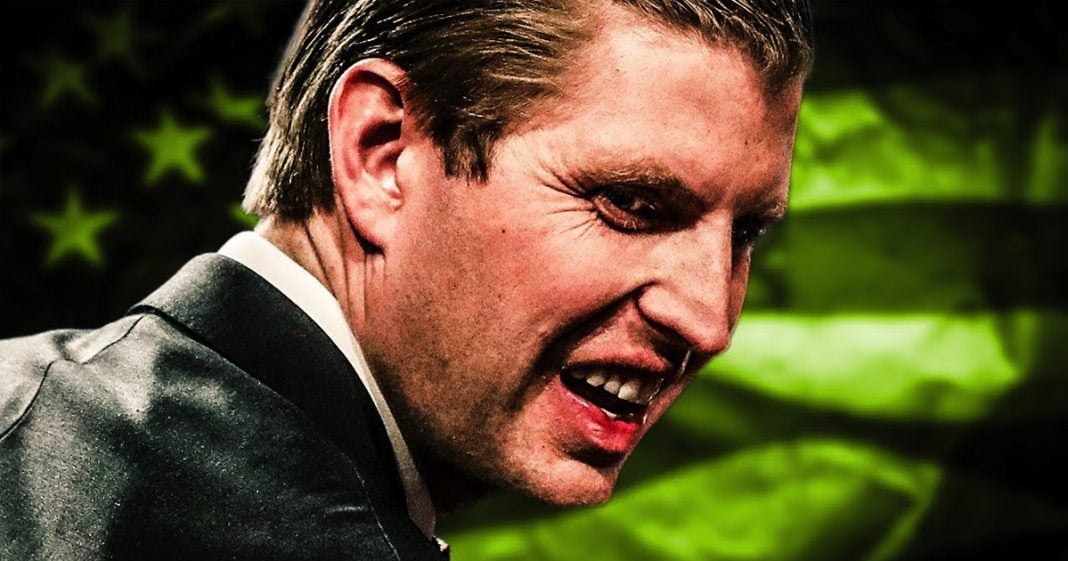 Eric Trump is absolutely furious at Democrats because he believes that they didn’t clap enough during Donald Trump’s first State of the Union address. Trump told Fox News that Democrats have to clap when Trump mentions Christianity because we should all be “united on God,” before going into a whiny tirade about how “scared” Democrats are. Ring of Fire’s Farron Cousins discusses this.

On Wednesday morning, the day after Donald Trump’s first State of the Union address, Fox and Friends decided that it would be a good idea to have Eric Trump on the program to talk about how darn disrespectful those Democrats were during the State of the Union. Take a look.

Eric Trump: Like, who wouldn’t want Apple to bring $350 million…

Eric Trump: … back into the economy and no one stood.

Steve Doocy: What does that say to you about the Democrats?

Brian Kilmeade: Well, they thought they had the midterm…

Now, I guess you kind of have to forgive Eric Trump because this isn’t a guy whose one, very smart or two, has probably spent a lot of time paying attention to American politics. As somebody who’s watched a lot of State of the Union addresses, pretty much every single one for the last 16 years, let me go ahead and explain to Eric Trump how it works. The part that’s in power usually claps when their president says things. The party that’s not usually sits there a little bit grumpy, a little unhappy because they disagree with everything that the majority party has to say. That’s what happened during Obama with the Republicans. It’s what happened during the Bush years with the Democrats. It’s what always happens.

But for a guy like Eric Trump to sit there and say that we should all be united in God. Um, let me remind everyone including those morons over at Fox and Friends who didn’t call him on this. This is a guy whose charity literally stole money from kids with cancer and paid it back to his own organization so he could put it in his own pocket. Don’t you dare lecture anyone in the world about being united on God because you stole money from kids with cancer. You are literally a villain. You’re the villain most children’s movies at this point. You took money directed for kids with cancer so you could put it in your own pocket.

While we’re on the subject of applause, how about we get into the fact that your idiot father decided to go ahead and give himself a round of applause several times throughout the entire speech right into the microphone like some kind of idiot whose never given a speech before. It’s not his job to act as his own hype man for the State of the Union, yet that’s exactly what he did.

Eric Trump is wrong on so very many issues. The African American unemployment rate that was cut in half by Barack Obama and continues to decline today because of the policies set forth my Barack Obama. All those companies reinvesting money into the United States, even though they already had those billions of dollars that they could’ve reinvested at any given time over the last eight years. They just chose not to. Furthermore, while we’re on the subject of reinvesting it in the United States, let’s not forget the fact that the majority of the time, that’s going to mean they’re just going to re-buy back a lot of their own stocks so that their numbers get artificially inflated and they all make more money. They’re not going to create more jobs. People aren’t going to get raises. They’re going to reinvest in their own stocks so that the shareholders get to make a little bit more money.

That’s the real State of the Union and that’s the State of the Union that Eric Trump and the people at Fox and Friends don’t want to talk about because when you start to pull back the curtain a little bit, it exposes every lie that this administration has ever told.