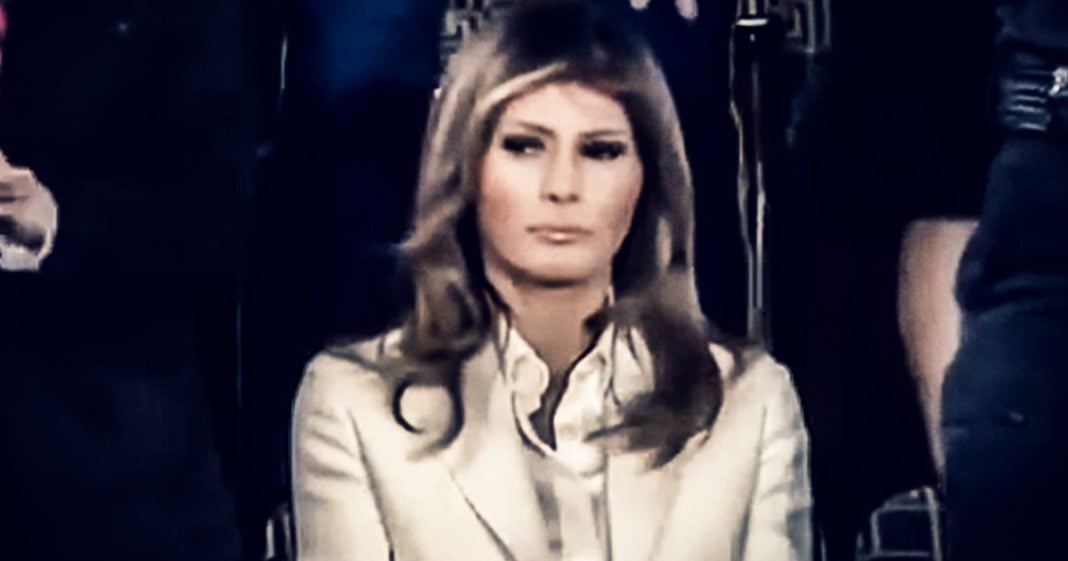 Melania Trump rode to Tuesday night’s State of the Union address separately from Donald Trump. While that may not seem too conspicuous, her reaction to Trump’s speech clearly gave away her mood. When Trump mentioned “faith, family, and God” as pillars of the way of life in the United States, the crowd erupted in raucous applause – except for Melania. She looked like she would rather be anywhere else in the world than having to listen to a serial philanderer con a bunch of American citizens. Ring of Fire’s Farron Cousins discusses this.

Recent reports have shown us that Melania Trump is absolutely furious with her husband over the Stormy Daniels, the adult film actress, the allegations of the affair that the two had shortly after Melania gave birth to Barron and her anger and pretty much hatred for the President of the United States was on full display during the State of the Union.

Take a look at this clip and see Melania’s reaction when Donald Trump starts talking about family and faith and God.

Donald Trump: In America, we know that faith and family, not government and bureaucracy, are the center of American life. The motto is “In God we Trust”.

All right, so several things to point out before we even get to Melania’s like stoned face, I hate you, so much reaction to her husband. Steve Mnuchin, in that clip, looked like he was more excited than he’s ever been in his whole life and his body didn’t even understand how to convey happiness. Just that wooden plastered smile on his face, clapping like a child. And then speaking of children, poor little Barron sitting there clapping his poor little heart out for his father who’s lying to the American public all night, but that kid’s just happy to be there, happy to see his dad up on stage and, wow, so much enthusiasm for this guy who doesn’t understand that his dad is destroying this country.

And then, of course, there’s Melania. Melania’s expression looked like she hated every single thing about that man that was speaking and clapping very loudly for himself at the podium. She didn’t want to be there. In fact, she didn’t even ride with the President to the State of the Union address. They took two separate cars and it’s not even like they left an hour apart, they went at the same time, they were just in different cars ’cause she doesn’t want to be around him anymore.

I will be shocked if Melania Trump does not file for divorce before the end of Donald Trump’s first term as President of the United States. She hates him and she may not be saying that publicly but the fact that she literally does not want to be around him, canceled things on their trip to Switzerland so she didn’t have to be near him, didn’t ride in the same car with him and then refused to give the standing ovation that every other republican in that room was giving, that speaks volumes about how this woman feels about the man that she married. She can not stand him and I seriously doubt those two will be together by the 2020 elections. Maybe not even by the 2018 midterms.