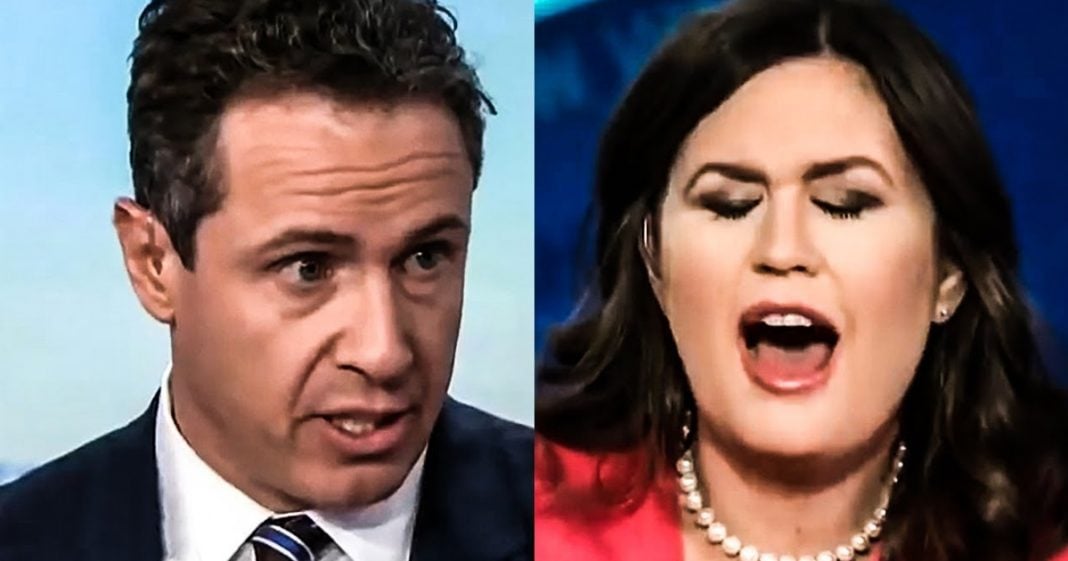 CNN’s Chris Cuomo seems to enjoy taking on members of the Trump administration, and he let White House Press Secretary Sarah Huckabee Sanders have it when she attempted to lie about immigrants coming into the country. Cuomo laid it bare when he told Huckabee Sanders that the only people Trump wants coming into this country are “rich and white,” and Ring of Fire’s Farron Cousins explains why Cuomo is absolutely correct about that.

I think that CNN’s Chris Cuomo really enjoys bringing on members of the Trump Administration and showing the world how stupid these people truly are. He decided that he was going to bring on Sarah Huckabee Sanders to discuss Donald Trump’s immigration plan, and it pretty much went exactly as you would expect. Take a look.

Sarah: It’s not exclusion though, it’s the safety and security of the American people-

Chris: I know, but where is that seen in the facts, though, Sarah. You know when it comes to the lottery, the selling point is for these people when they come on. You know that’s not true. They get vetted, they get vetted several times. What you call chain migration, which the Democrats call Family Unification-

Sarah: Which Democrats have voted to end in the past.

Chris: But no, no, no. What they have done is to vote for limitations. And nobody’s saying that you don’t want to improve these processes so you know who’s coming in, but the idea, what the President said last night, somebody can literally bring in as many people as they want. It’s just not true. It’s not true in the facts, it’s not true in reality.

Sarah: People are, multiple instances where they are bringing in dozens of people. Look, we’re not saying they can’t bring in anybody, we’re just limiting the number to be the clear and immediate family.

Sarah: That’s not true at all, that’s actually what Democrats are doing, is trying to paint the President saying this. Look, the President wants to have people. I’ve heard him say it hundreds of times. He wants people from all over the world, from all different places to come, but he wants to make sure that they want to come here for the right reasons. That they want to come here to be part of our society, to contribute, to work, to help raise a family, and to make sure that they’re not coming here to do harm to American citizens. I think that’s a positive. I think everybody in America thinks that’s a positive, and I think that’s the reason that 75% of the country last night said they liked Donald Trump’s speech. There was a poll last night-

Chris: There was plenty of stuff in there to like it. We had 48% were highly favorable. Look, it’s one thing to say it, it’s then what do you do and what do you tweet thereafter. You know, we don’t have to go back into the language he used, but he wants people coming into the country, but not from those certain S-hole countries. He wants them rich and white, because he wants them from Norway.

Chris: And that’s not America.

Sarah: Chris, that’s the opposite…

Chris: I wouldn’t be here, if that’s America.

Sarah: That is the opposite of what this President has laid out.

It is Sarah Huckabee Sander’s job to lie on behalf of the Trump Administration. During the State Of The Union address, Donald Trump told us that immigrants were coming over here and committing crimes at a staggering rate. The reality is that first generation immigrants to the United States actually commit fewer crimes than native-born US citizens. The crime rate among immigrants is lower than that among native-born white people here in the United States. But Sarah Huckabee Sanders wants to repeat the lie that Donald Trump told during the State Of The Union, that these people were coming over here and committing crimes. And Chris Cuomo called her on it. And more importantly, that point he made at the end of that clip, Donald Trump just wants rich, white people coming over the country, like from places like Norway, like he specifically said a few weeks ago. Cuomo pointed out the shit-hole comment that Donald Trump made, saying “We don’t want people from those countries,” and Sarah Huckabee Sanders, like a good little servant of Donald Trump tried to defend it and play it off, and deflect, and say, “No, it’s actually the Democrats are saying these horrible things that actually came out of the mouth of my boss. The Democrats are the ones who don’t want to include everybody. They’re the party of exclusion.”

That’s how stupid this administration has gotten, and more importantly, it’s how stupid they think you are. They think the American public is so dumb that they can blame things that they said on Democrats, and think that the public is going to believe them. The worst part is that the Republican base actually does believe them, and that presents a huge problem for American politics, because until we get the stupidity out of the Republican base, people like Sarah Huckabee Sanders, Kellyanne Conway, and even Donald Trump, are going to have long and happy careers in the United States government.