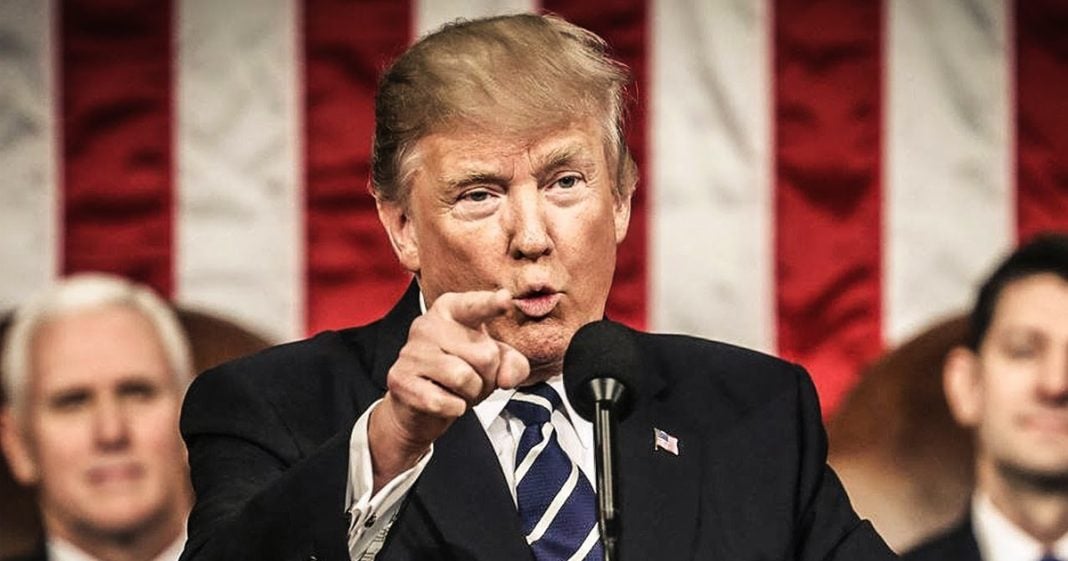 Leave it to a guy like Donald Trump to find a way to make money off his first ever State of the Union address on January 30th. According to a fundraising email sent out by the Trump campaign, any donors who send in $35 or more will have their names scroll across the bottom of the screen during the address. Ring of Fire’s Farron Cousins explains how this harms our democracy and why Trump thinks everyone has an ego as large as his.

Tonight is Donald Trump’s first State of the Uniom Address. And, the reason I say, uniom is because if you’ve seen the tickets to the event, they managed to somehow misspell the word union, and it is instead written as u-n-i-o-m. None the less, first State of the Union Address tonight, and for the price of at least $35 dollars, possibly as much as $2,700 dollars, you too can have your name scroll across the bottom of the screen as a verified, bonafide Donald Trump campaign supporter.

You know, we really shouldn’t be surprised at anything that comes out of this administration at this point. But, what this does, the reason Trump is doing this, is one, the money, obviously. That’s why he does everything he does. But, two, because he thinks American citizens are as egotistical and disgusting as he is, that he believes people would donate money just to see their name go across the bottom of that screen for five seconds. That little five seconds of fame should be more than enough to satisfy the peons throughout this country, according to Donald Trump.

Well, guess what? Most of us don’t care. Most of us don’t care to have our names go across the bottom of the screen to prove to the rest of the country that we were stupid enough to send you money for your next campaign, which at this point, probably won’t even happen. But, nonetheless, that’s what Donald Trump has done. That’s their plan. Give them at least $35 dollars, and your name is going to go across the bottom of that screen. Hopefully, they’ll have somebody there spell checking it since obviously this administration is really, really bad with spelling.

A few other things to point out about tonight’s State of the Union Address, I can guarantee you that tomorrow we’re going to see some pundits, newspapers, other members of the press, saying Donald Trump looked presidential. Well, he does not look presidential. The State of the Union has not yet happened, but I can guarantee you based on everything we’ve seen from Donald Trump, he is not going to act presidential during one second of tonight’s State of the Union Address. Furthermore, it’s going to be filled with lies that the media would do a very poor job of debunking immediately after the speech, and the American public will just continue as usual.

The third prediction I have is that, sometime either tonight after the speech or tomorrow, we will see Donald Trump tweet out that this was the highest rated, most watched State of the Union Address ever, even though we will eventually get numbers in that show that it, in fact, was not. I guarantee you, that will happen.