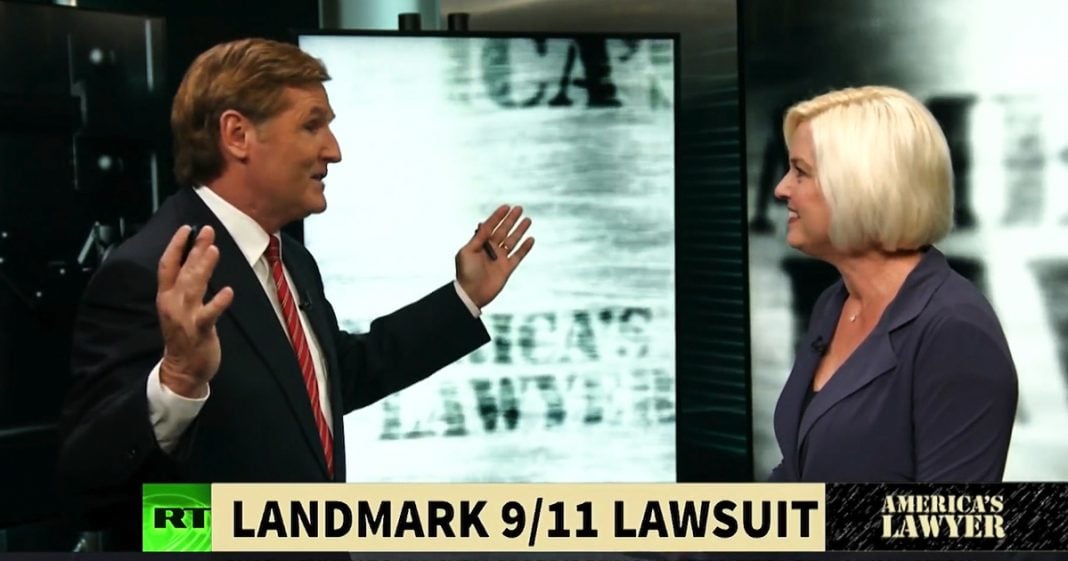 Via America’s Lawyer: Mike Papantonio is joined by Mollye Barrows, Legal Journalist for The Trial Lawyer Magazine, to talk about a new 9/11 lawsuit which Saudi Arabia’s lawyer countered as Islamophobic.

Mike Papantonio: A widow from the September 11, attacks called Saudi Arabia disgraceful after their attorney characterized her landmark 911 lawsuit as Islamophobic. The lawsuit aims to uncover, if members of Saudi Arabian kingdom provided financial support to the terrorist that hijacked and crashed two planes into the New York twin towers. Joining me to talk about this is Mollye Barrows, Legal Journalist for the Trial Lawyer Magazine. Mollye, thanks. Tell me, it’s been 17 years since the attack. What evidence has emerged? What’s changed about all of this?

Mollye Barrows: Well, this lawsuit was actually first brought to court in 2010, but it was dismissed because there were laws in place against suing Saudi Arabia. Essentially you couldn’t go after any government for terrorism that wasn’t on the US list of state sponsored terrorist.

Mike Papantonio: Finally, did something smart and said, “Yeah, we can sue Saudi Arabia.” Matter of fact, our law firm full disclosure, we’re doing that. We’re suing terrorist all over the country. All over the world actually under this new terrorist act, but anyway, So, that’s the change.

Mollye Barrows: That’s the change. So, Justice Against Sponsors of Terrorism Act in 2016 opened the door for them to refile this lawsuit and basically because it was dismissed before, the Saudi Arabian attorneys are saying, “Well, you should dismiss it again. Not only for lack of evidence, because there is no evidence,” they’re basically making a claim that those who support Islam or the religion of Islam itself, everyone who believes in it is terrorist. And that’s not at all what this was saying.

Mike Papantonio: But, that’s where the attorneys are trying this against her and all, you’re just victimizing Islam, which is absurd.

Mike Papantonio: From the very time, matter of fact, their argument in from of congress, when congress says, “We’re gonna open this up to where we can sue Saudi Arabia.” That was the argument to congress. Oh, you’re just victimizing us, you’re victimizing Islam. You’re victimizing Muslims and it doesn’t have anything to do with that. The truth is, what was it, 85% of the people involved in the twin towers were from Saudi Arabia.

Mollye Barrows: 15 out of 19 were from Saudi Arabia and not even until now, were they able to approach suing.

Mike Papantonio: So, the good news is, maybe this woman can do something that has some long, you know, call it what you want. I don’t …

Mike Papantonio: I don’t care what you call it. Maybe, victimizing Islam, I really don’t care, but this is going to have long standing effect on how these lawsuits take place against Saudi Arabia.

Mollye Barrows: You’re right, because there are so many and it is bringing to light new evidence, which has recently been declassified information from the FBI as well as the 911 Commission Report that indicates that there was a connection between Saudi Arabia and some of these terrorist cells.

Mike Papantonio: Yeah, but you …

Mollye Barrows: Funded them and supported them.

Mike Papantonio: That’s just the truth to this story. Mollye, thanks for joining me.

Mollye Barrows: Yes, and before we go Pap, you were fresh off the plane from Denver. You were at the Sundance Film Festival where the Devil We Know premiered.

Mollye Barrows: You were featured in that. Tell us a little about that.

Mike Papantonio: Well, it’s a film that’s going to do very, very well. It’s a film that’s about DuPont poisoning the water of 70,000 people in the Ohio River Valley. At Sundance, it was a huge mega success, so I’m very proud to see this movie released.

Mollye Barrows: It’s important it’s released and thanks so much for the work you did that made it possible for them to do that film.

Mike Papantonio: Well, thank you Mollye. Thanks for joining me.