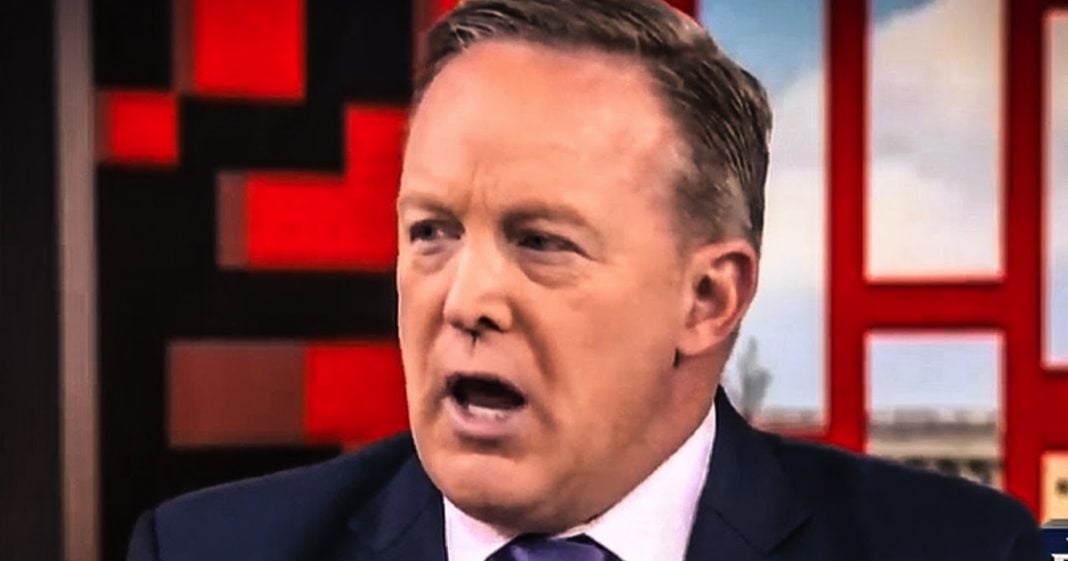 During a recent interview with MSNBC, former White House Press Secretary Sean Spicer finally admitted that he was sorry for embarrassing his friends and family during his time working for Trump. And though he says that he doesn’t regret working for Trump, it is obvious that the job caused irreparable damage to his personal and professional life. Ring of Fire’s Farron Cousins discusses this.

Recently, former White House Press Secretary Sean Spicer appeared on MSNBC, where they decided to greet him with a video of some of his greatest hits as Press Secretary, and then proceeded to ask him if he had any regrets about taking the job. Take a look.

Craig Melvin: I want to just, these are just some of your greatest hits, so to speak, and I want to talk to you about it on the other side and get your take on one or two of these. Take a listen.

Sean Spicer: This was the largest audience to ever witness an inauguration, period. Both in person and around the globe.

But even General Flynn was a volunteer of the campaign. And then obviously there’s been discussion of Paul Manafort who played a very limited role for a very limited amount of time, but you had a, you know, someone who’s as despicable as Hitler, who didn’t even sink to the, to using chemical weapons.

Craig Melvin: You made some mistakes.

Craig Melvin: Do you regret taking the job?

Craig Melvin: Not at all?

Sean Spicer: I think in terms of net net, I enjoyed having a front row seat to history, was an opportunity of a lifetime. Did I make mistakes? Thank you for taking me down memory lane, absolutely. Do I hope I grow as a person, as a friend, as a stranger, to do better? Absolutely.

Sean Spicer: Well, what do you?

Craig Melvin: Do you, do you regret at all taking the job, and by that-

Sean Spicer: No, no, no, I regret things that I did that brought embarrassment to myself, my family, friends of mine who have been very big supporters where I said, “Hey, that was a self-inflicted wound. I screwed up.”

Spicer really hit the nail on the head there, when he said, “These are self-inflicted wounds.” And he is 100% right. And yes, he does owe his family and his friends an apology for how embarrassing he was for them during his time as Press Secretary. But again, self-inflicted wounds. He is the one who made the choice to walk up to that podium and lie to the American public every single day. He is the one who got so irate during press conferences that Saturday Night Live devoted about eight months to making fun of him. He is the one who did this to himself, and yes, they were self-inflicted wounds, as he correctly pointed out. And he regrets embarrassing his family, his friends, and everyone he’s ever known throughout his life, but he doesn’t regret taking the job. Now, those two statements seem to be at odds with one another.

You can’t be embarrassed about your behavior, the things you had to say, the things you had to do, as Press Secretary, and also not regret taking the job. Because if you don’t regret taking it, then you don’t regret the horrible things that you were made to do. You could’ve said no, you could’ve done something else, but you went right along with it. That’s part of that job. Do you regret shrinking off into the bushes, telling reporters to “Come over here where there’s no cameras”, to talk to you? You didn’t even mention that one and MSNBC didn’t even bother to show that, but that to me was probably one of your more embarrassing moments as Press Secretary.

And I hope every member of the Trump Administration watches that interview with Sean Spicer. Where he does talk about the few regrets that he does have about embarrassing his friends and family. Because Sean Spicer, as of right now, still can’t find a job. No media outlet wants to hire him even though he has applied to damn near all of them. He can’t get a full-time gig lecturing. He can’t get a full-time gig as an adjunct professor at colleges. He can’t find work because he has no credibility, and that includes the application he put in at Fox News that was declined. He has so little credibility that even Fox News was like, “I don’t think we’re going to go that route, but you know, thank you for your time.”

Every member of the Trump Administration needs to understand that. Because Sean Spicer’s future is the future for you as well. People like Sarah Huckabee Sanders and Kellyanne Conway. Watch what happens to Sean Spicer, because that exact same thing is going to happen to each and every one of you.