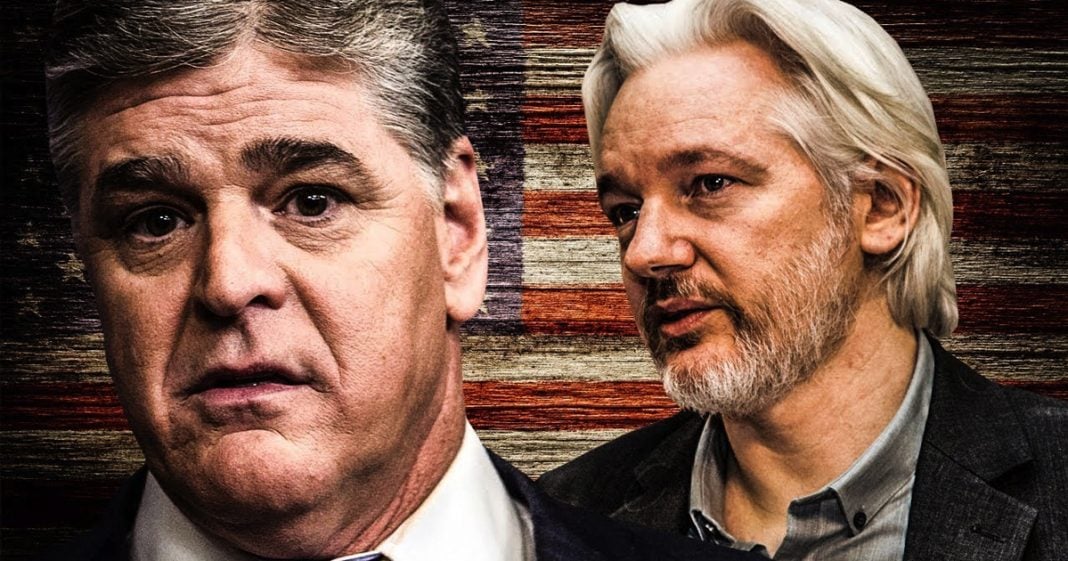 Wikileaks founder Julian Assange sent a Twitter message to Sean Hannity offered to set up “other channels” that the two could use to communicate so that Assange could send Hannity some damning info on “top intel Dems.” The only problem is that he sent it to a Sean Hannity parody account, not the actual Hannity Twitter. Ring of Fire’s Farron Cousins discusses this.

Recently Sean Hannity’s official Twitter account was taken offline. As of right now, we don’t exactly know why it was, if it was compromised and Twitter decided to temporarily suspend him or if it was just an accident. But, here’s what we do know, in the wake of Hannity’s Twitter account being suspended or taken off, or whatever, a lot of people decided to create Sean Hannity kind of parody accounts pretending to be him under a new account since his old one was taken offline. They managed to fool a lot of people including Julian Assange, the founder of Wikileaks. It’s been reported now that Julian Assange sent one of these parody accounts, Sean Hannity underscore was the Twitter name that was posing as Sean Hannity, even though it was actually a technical writer from the state of Texas by the name of Del Gilliam.

Julian Assange sent this parody account a private message on Twitter saying you can send me messages on other channels. Some news on Warner. Warner, a democrat in the U.S. Congress. Julian Assange basically was trying to set up back channels of communication with Sean Hannity to give him dirt on a senate democrat, Senator Mark Warner and didn’t even … this guy that’s this master hacker or master computer wiz, whatever, didn’t even realize he was sending it to a parody account. But now, we know, that Julian Assange is attempting to work with Fox News people like Sean Hannity, the worst of the worst of what they’ve got, to spread dirt about democratic senators.

You know, I know a lot of democrats, progressives, or far left folk still seem to like Julian Assange. To me, there’s nothing redeemable about this guy what so ever. Especially if he’s wanting to work with Sean Hannity to take down democrats in the Senate. I wouldn’t care if he was sending these messages to democrats trying to take down republicans. That’s not how this works. Julian Assange has a political agenda. It’s not about what’s best for the United States, it’s not about what’s best for anybody really other than himself. That’s all that he cares about and he was so willing to take down the democratic party that he didn’t even bother to check and see if he was sending his information to the right Twitter account of Sean Hannity.

That’s pretty pathetic but it also shows you just how desperate this guy is getting to take down the democratic party for reasons that we really don’t even know yet. We don’t know for sure why this guy has a vendetta against the democratic party, even though they were the only ones standing up for him for years and years and years. All we know is that he is desperate to get this information out but, now that we know he’s trying to do this, the big question remains, what’s gonna happen? What’s gonna happen to his public opinion here in the United States and more importantly, what’s gonna happen to his credibility? In my opinion, I don’t think this guy has any credibility to speak of.