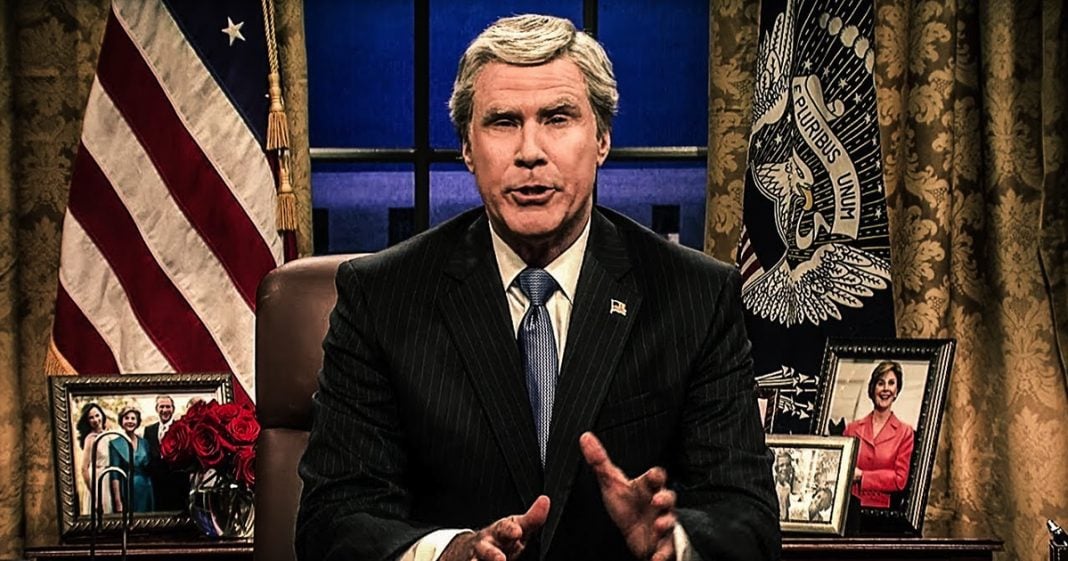 The latest polls show that George W. Bush now has a favorable approval rating, even among Democrats. So Saturday Night Live and Will Ferrell decided that it was a good time to remind Americans of how bad Bush really was, even when compared to the disaster that is Donald Trump. Ring of Fire’s Farron Cousins discusses this.

Recently, new polls have come out with some actually pretty good news for former President George W. Bush. According to the latest polls, George W. Bush has a 61% approval rating among all America citizens. What’s interesting about that is that when he left office February 2009, little over a few weeks after he left office, his approval rating was 33%. So, why has that suddenly flipped? Why do people say, “You know what? He was a good guy”? Well, it’s because Donald Trump is such a horrible president that it kind of makes us look back and think, “Well, maybe Bush wasn’t that bad.”

Sensing that something wasn’t right in the United States today, Saturday Night Live decided to bring back Will Ferrell this past weekend to portray George W. Bush to explain to the America public that no, he was still a really, really bad president. Take a look.

Will Ferrell (George W.): Like I was saying. I don’t know if you’ve seen the news, but according to a new poll, my approval rating is at an all time high. That’s right. Donny Q. Trump came in and suddenly, I’m looking pretty sweet by comparison. At this rate, I might even end up on Mount Rushmore right next to Washington, Lincoln, and I want to say Kensington. I don’t know. But, the point is, I’m suddenly popular AF. Lot of people are saying, “Man, I wish George W. Bush was still our president right about now.”

I just wanted to address my fellow Americans tonight and remind you guys that I was really bad, like historically not good. I get why you don’t like this current guy. Heck, I voted for Jill Stein all the way. But please, do not look back and my presidency and think, “This is how we do it.” Don’t forget, we’re still in two different wars that I started. Hey, hey, what has two thumbs and created ISIS? This guy.

I love that clip. I love the entire segment that they did as George W. Bush talking about how horrible it was because, not just that it was funny, but because it was true. All of the things that he mentioned in the entire clip, and you can find a link to it in the description. The fact that we’re still involved in two unwinnable wars that he started, the fact that his vice president, Dick Cheney, shot a guy in his face, the fact that the stock market hit around 8,000 points while he was president, the housing market crash, the economy crashing overall, the crimes of Wall Street, those are things that we cannot forgive George W. Bush for. Yet, a lot of America public thinks, “You know what? I guess he wasn’t all that bad. Maybe I wasn’t paying much attention back then. Maybe he did some good things.” Well, no.

Now, don’t get me wrong. Donald Trump is just as bad as George W. Bush. And to be honest, personally, I would go as far as to say, yes, he is worse. But that doesn’t mean that we need to forget about all the crap that happened during the George W. Bush years. The fact that this is an administration that should’ve been prosecuted for war crimes for their authorization of illegal torture methods, yet they weren’t. We cannot gloss over that. The fact that 55% percent of Democrats now view George W. Bush favorably, up from 11% after he left office, that is absolutely disgusting.

You know, it’s easy to look back on the past and overlook the bad things, and think, “Well, maybe he was just a lovable goof who occasionally couldn’t complete a sentence without bumbling up his words.” But, the reality is that this guy committed atrocious war crimes, got thousands upon thousands of American troops killed overseas in a war that was for oil, because let’s not forget the fact that they had maps drawn up with oil industry executives carving out their own little parts of Iraq that they were going to go exploit. That is how they divided up that country when they were talking about going to war. George W. Bush should not be approved by anybody in this country, and he sure as hell shouldn’t have a 55% approval rating among Democrats. That’s what SNL was poking fun at, and they did a beautiful job with it.