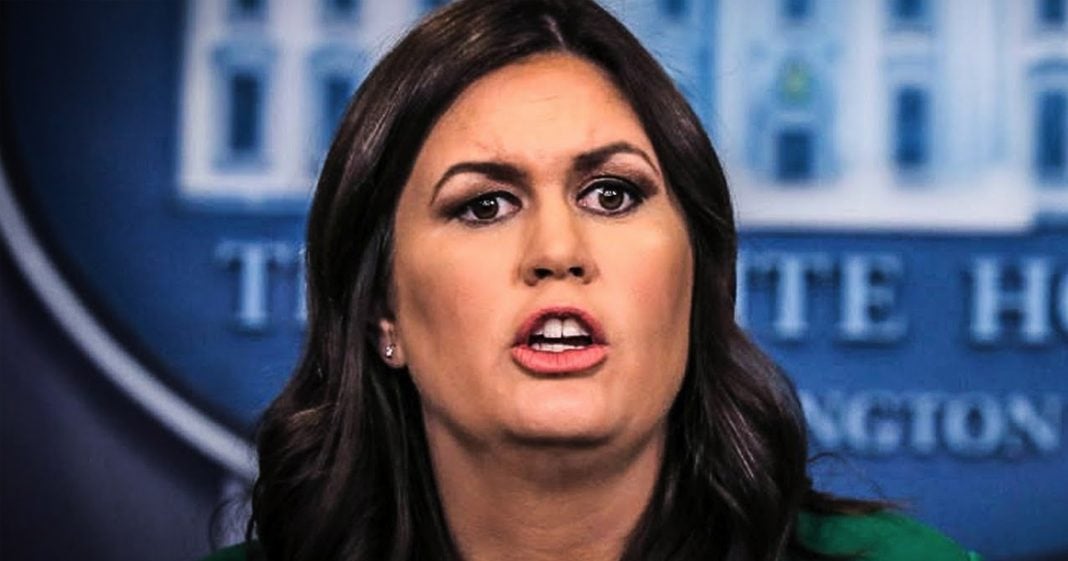 During Wednesday’s White House press briefing, press secretary Sarah Huckabee Sanders said that the White House has an immigrant plan that includes things about DACA that will be released Monday. When asked why they won’t release it now, she replied that doing so would take all the “fun” out of it. Her boss is playing political games with people’s lives, and she thinks this is “fun” for everyone. Ring of Fire’s Farron Cousins discusses this.

One of the biggest issues happening in the United States today, DACA, the Dreamers, the people that the Democratic Party swore they were going to protect in this recent budget battle. They’re going to fight for them all the way up until February at least they know about. Well, the White House announced this week that they actually do have an immigration plan that they’re going to put forward in the coming days. They want to release it Monday. At a recent press briefing, Press Secretary Sarah Huckabee Sanders was asked point blank, “What aren’t you releasing it now?,” and here’s what she had to say.

Reporter: Does that legislative framework you said is a permanent solution for DACA, does that include a path to citizenship for recipients?

Sarah Sanders: Well, if I told you now it would kind of take away the fun for Monday. We will, again as I said, be rolling out some of the specifics of the framework of that legislation that we’d like to see on Monday. I’m not going to get ahead. I’m not going to go any further than we have in laying out the principles we already have over the last several days.

That’s right, ladies and gentlemen. We’re not going to go ahead and give you the plan because it’s just so damn fun to toy with the lives of 800,000 people who are currently scared to death that they may not have a place to live next month. They might be in a completely different country next month. They, through no fault of their own, are in a situation where their lives could be torn apart. They could be torn away from their families, from their siblings, from grandparents, from parents, from children just because Republicans like Sarah Huckabee Sanders think it’s fun. We’re doing it because it wouldn’t be fun if we just told you what it is right now.

This isn’t a game, but that is exactly how the Trump administration is treating this at the moment. They believe that the lives of these 800,000 Dreamers in this country are just political toys. It’s their leverage. They’re pawns in this ultimate chess game that the Republicans are trying to play. They did the same thing with low income children in the United States with the CHIP expansion. They’re doing it with the Dreamers, and they’re going to continue to do it. They have no intention of keeping these 800,000 people in the country. They don’t want them here. Their base doesn’t want them here. Corporations want them here because they view them as a source of cheap labor.

But these are tax paying, for the most part law abiding by the same percentages as the rest of the population. They work. They go to school. These are people that are contributing to society, and we’re just willing to let them go out the door or to use them as bargaining chips. I don’t care what party you’re in, that’s not okay. Contrary to what Sarah Huckabee Sanders has to say, it sure as hell isn’t fun. I guarantee you if you go ask any one of those 800,00 children if they’re having fun right now with this ongoing debate, the answer is going to be overwhelmingly no.