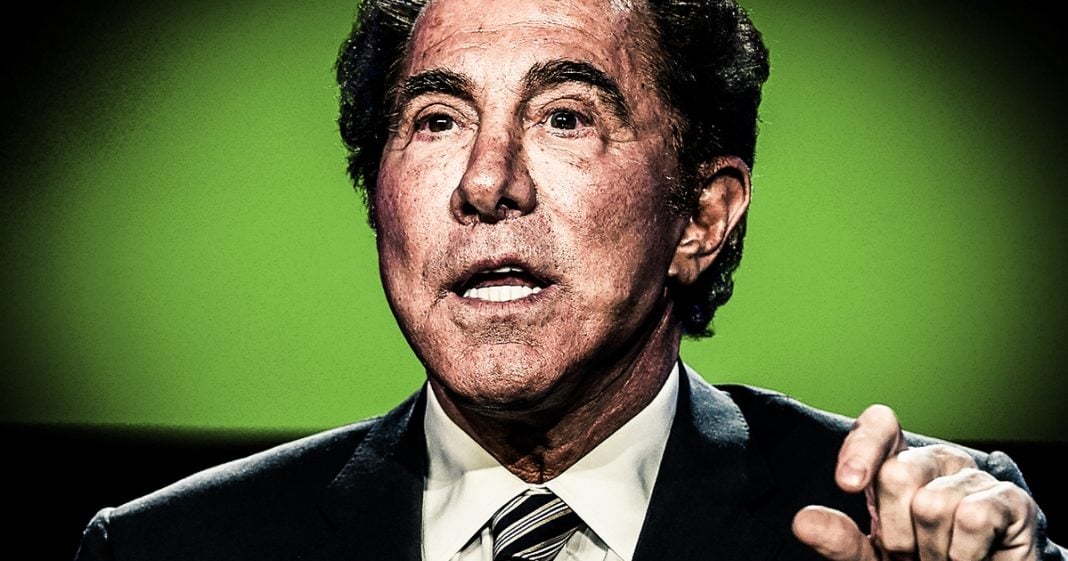 Las Vegas casino mogul Steve Wynn was forced to resign as the Republican Party’s finance chairman this weekend after allegations of sexual misconduct caught up with him. And even though Wynn is a Republican who has given millions to the party over the years and in spite of the fact that he was hand-picked for the position at the RNC by Trump himself, Fox News thought it was worthwhile to point out all of the money (which wasn’t much) that Wynn has given to Democrats over the years. Ring of Fire’s Farron Cousins discusses the collective nervous breakdown that is taking place at Fox News.

Las Vegas casino mogul Steve Wynn was recently accused by multiple women of sexual misconduct at his resorts and casinos in Las Vegas. Steve Wynn also happens to be, and this was something not a lot of people knew about, happened to be the finance chairman of the Republican Party of the United States. He was an executive within the Republic Party, within their leadership. He was the guy controlling the money for the party. He was hand picked by Donald Trump to serve in that capacity. He has given millions upon millions upon millions of dollars to Republicans all over this country for the last few years to help them win elections. So, when it was revealed that he was involved in a sexual misconduct scandal and he was going to resign as RNC finance chair, how did Fox News cover it? They covered it exactly how you would expect Fox News to cover it. Take a look.

Fox News Reporter: Amid calls for Republicans to return money given by embattled casino mogul Steve Wynn, a Fox News investigation shows the former RNC fund raising chair also gave to Democrats. A review of Nevada state records show Wynn personally contributed $10,000 to a former Democratic secretary of state, $2,500 to Harry Reid’s Searchlight Leadership Fund, and from 2006 to 2017, Wynn’s various business organizations, all using the address of Wynn’s namesake casino, contributed over $700,000 to Nevada Democrats and Democratic-related organizations. So far, the state party has not returned our calls or emails for a comment-

That’s right, folks. Forget the fact that he worked for the Republican Party, that he was in a position of leadership in the Republican Party, and that he was put there by Donald Trump himself. This guy gave a couple of thousand dollars to Democrats. $12,500 went to Democrats, and then $700,000 from other businesses that went to other groups that could maybe, possibly be Democrats, regardless, well under a million dollars, when this guy has given tens of millions to Republicans and, again, let’s not forget, he was in charge of all of the money for that political party.

Well, in this case of Steve Wynn, there’s really not much you can do as a network to paint this in a negative light for the Democratic Party. The guy in charge of money for your party, for your Republicans, was just popped for sexual misconduct. And how have his organizations responded? His company? They said that they are going to do everything they can to protect their employees from the media and the fake news. Not protect them from their sexual predator-like boss, protect them from the fake news. I mean, that’s another story in and of itself, but Fox News isn’t going to tell you that. The Republicans aren’t going to tell you that.

And they’re probably not going to return all of the money that he gave them over the years, because that’s the difference between Democrats and Republicans. Democrats aren’t perfect by any stretch of the imagination, but at least when the guy that was going around molesting people got popped, they gave most of that money back, or they gave whatever they could back. Republicans have no intention of returning Steve Wynn’s money or of denouncing him at the national level, and probably won’t even really acknowledge that he had much involvement with their party leadership.