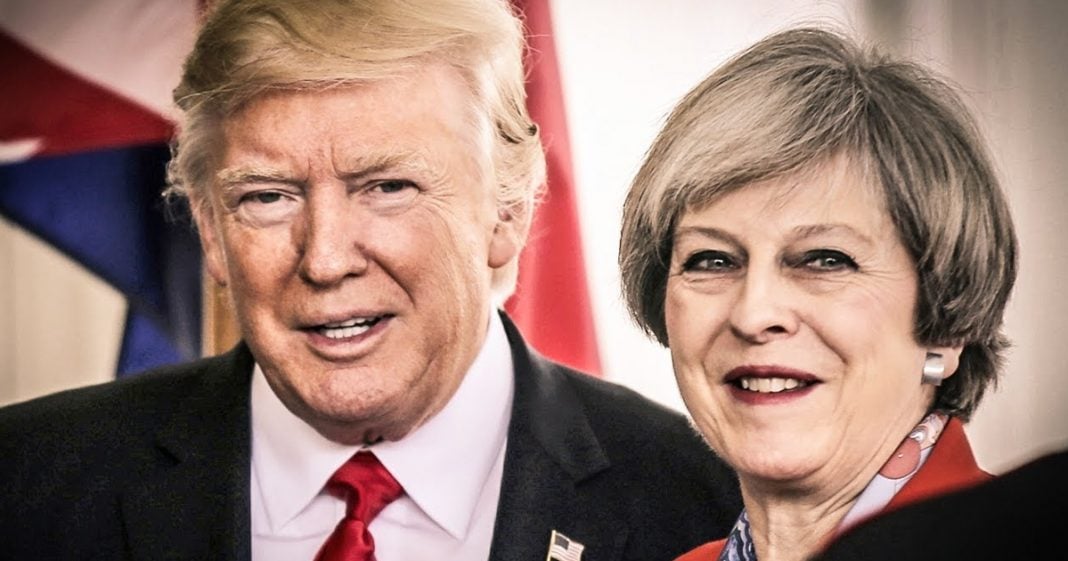 A new report in Bloomberg that featured an interview with a former strategy director for British Prime Minister Theresa May, Donald Trump ordered May to make people in her country stop protesting him if she ever wanted him to visit. He also made a fool of himself by asking about alleged “no go zones” in London, which May had to tell him don’t actually exist. Ring of Fire’s Farron Cousins explains how Trump’s constant ignorance is continuing to hurt the country.

According to a new article in Bloomberg where the interviewed Chris Wilkins, who is a former strategy director for British Prime Minister Theresa May, Chris Wilkins says that Donald Trump, during conversations with British Prime Minister Theresa May, repeatedly asked her about the alleged “No-Go Zones” in London and according to Trump, these are areas where the Islamic extremism is so bad that people are not allowed to go into those areas and he was worried about those for his potentially upcoming trip that he was gonna make to London.

Theresa May had to then explain to Donald Trump that such areas do not actually exist. It’s a made-up thing, made up by Americans. Donald Trump, I guess, accepted that explanation but then later on in the interview, Wilkins explained that Donald Trump also ordered Theresa May to have people in London, in the United Kingdom, stop protesting him or else he would never come over to their country.

Donald Trump was so concerned about public image and about being greeted by protestors that he basically refused to come to London because he didn’t want to be greeted by people who didn’t like him. He ordered a woman who he has no authority over, in a country that he has no authority with, to get rid of the protestors. Once you hear these stories it becomes kind of obvious why officials would eventually end up canceling Donald Trump’s trip to the United Kingdom. He is an overgrown man-child who cannot handle any kind of opposition, who cannot handle being told that he’s wrong about something and who sure as hell can’t handle being confronted by people who disagree with everything that he is and everything that he stands for.

The British government was right to stand up to Donald Trump and, unfortunately, we don’t have people in our government, or at least enough of them, willing to stand up to Donald Trump here at home. This story is actually one of hope. It’s not necessarily one to make fun of how stupid Donald Trump is with other world leaders and how that helps to tarnish our image with the rest of the world, it’s one that shows us what happens when you stand up to a bully. That’s what this is about because that’s what Theresa May and the people of London and the United Kingdom did. They stood up to him, they didn’t back down, they flat out told him we’re not rolling out the red carpets, you’re not meeting the Royal Family, we’re not gonna have all the bells and whistles, and we’re not gonna tell our people that they can’t peacefully assemble to protest you.

So, Donald Trump, like the toddler that he is, decided well, I’m just not gonna come to your country because you’re so darn mean. This is a guy who spends his days on Twitter making fun of American citizens that he is supposed to be protecting as President of the United States. That’s what happens when you stand up to a bully and that’s what needs to happen among members of the Senate and the House of Representatives to help take Donald Trump down a few notches and maybe, just maybe, he could start acting a little bit more like a president if people were willing to stand up and put him in his place.