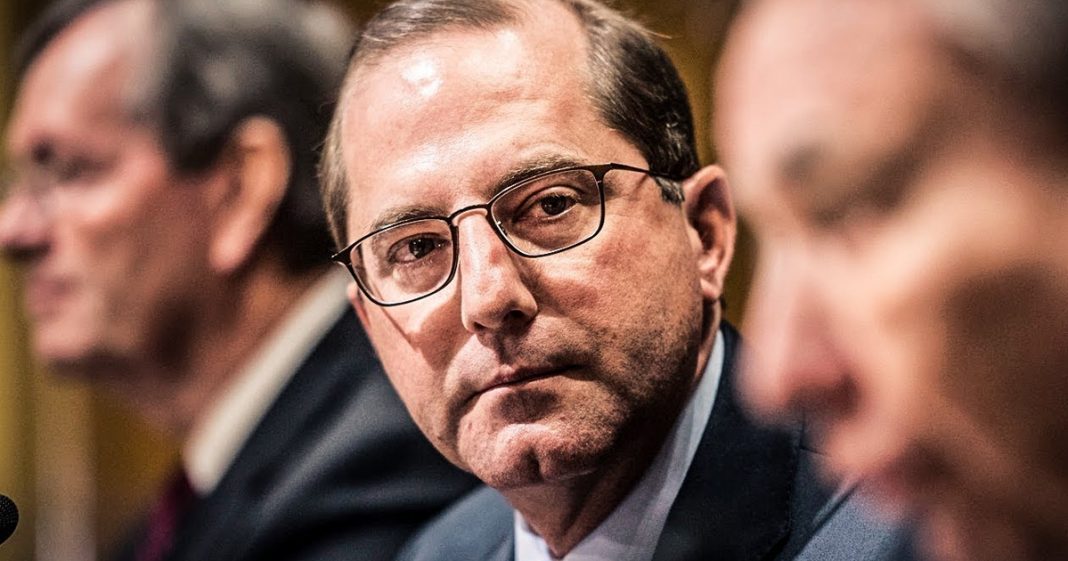 Alex Azar, the former President of the drug company Eli Lilly, was just confirmed by the Senate to be the new head of the Department of Health And Human Services. Trump’s appointment of Azar proves that he cares more about industry than he does about public safety, and we’re about to witness the same level of corporate cronyism that we saw during the Bush years. Ring of Fire’s Farron Cousins explains what this means for the health of citizens in the United States.

Here’s the thing about Alex Azar. Before he came to be the head of Health and Human Services, he was also the president of the pharmaceutical giant, Eli Lily. Now, he gets to oversee a department that is partially in charge of pharmaceuticals, here, in the United States. Now, he also served in the HHS during George W. Bush’s term. He left there, went to Eli Lily, made as much money as possible, now he’s back and he’s running the Health and Human Services Committee.

Now, before we get into how horrible and stupid this is, let’s take a minute to talk about that vote again, 55 to 43 confirmed him. Six Democrats defected and voted with the Republican, one of those being new found … newly seated, I should say, Senator Doug Jones from the state of Alabama, who, if you remember, I told you several times is going to be a very corporate Democrat. For all of those in this area who got to see his campaign ads on TV constantly, it was very clear he was going to be a guy that was not going to vote with Democrats 100% of the time. Nonetheless, Doug Jones, Heidi Heitkamp, Joe Manchin, and a few others voted to confirm Azar, which pushed him over the threshold to be able to be confirmed. Had all of them defected and voted with the Democrats, who understood how dangerous this was, this man wouldn’t’ve been confirmed, his nomination would’ve been tossed.

Instead, we get this former Eli Lily president as head of Health and Human Services. Now, in case you’re not familiar HHS is a $1 trillion department that oversees major health insurance programs, drug and food safety, disease control and prevention, and advanced medical research. Doesn’t exactly sound like the kind of thing we want a guy with close ties to the pharmaceutical industry to be in charge of, does it? Unfortunately, this is exactly what we saw during the George W. Bush administration, where members of the pharmaceutical industry, CEOs, presidents, became the heads of industries like … or agencies, I should say, but they basically turned them into industries, like the FDA and HHS.

What happened during those years? We saw a flurry of dangerous drugs make it onto the market, because the FDA was in the pocket of Big Pharma, because HHS was in the pocket of Big Pharma. How many massive pandemics did we have during the Bush years? Think about that? That’s all from HHS spreading fear about diseases and telling us we all need to go out and get the latest immunizations out there. There was bird flu, there was swine flu, there was every other flu you could imagine. That’s what happens. Public fear and public panic about health problems raises the profits of pharmaceutical companies, and that’s what we’re going to see under Azar’s leadership at Health and Human Services. Those six Democrats, who defected to vote him into office, are just as responsible for his reign that’s coming up as Donald Trump and the Republicans.