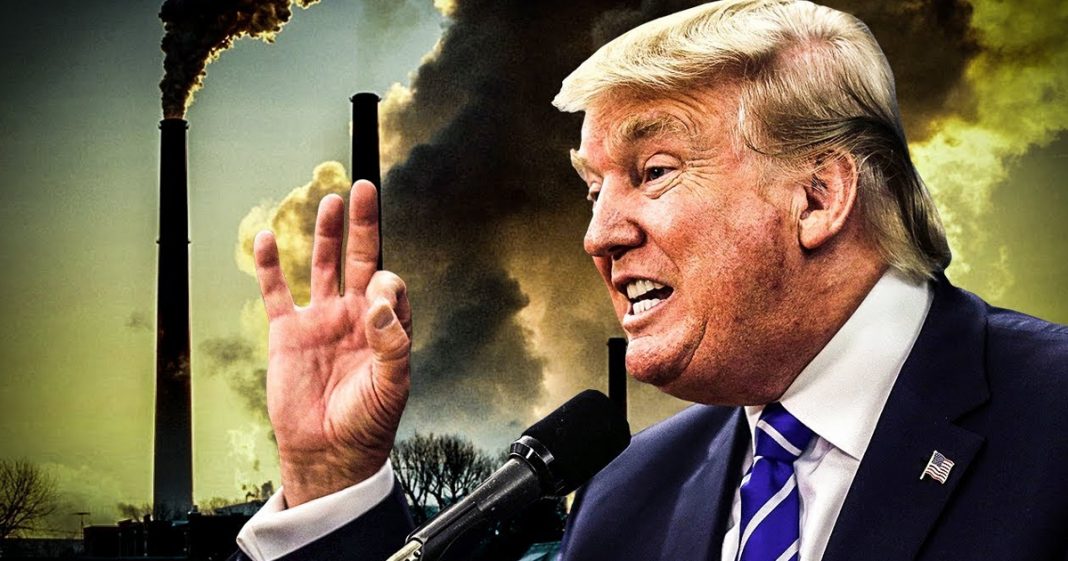 The Trump administration has announced their plan to roll back regulations under the Clean Air Act that will allow fossil fuel companies to spew more toxins into our air. This will have a devastating effect on human health, and serves to benefit no one except the fossil fuel companies. This is one of the most egregious attacks on American citizens carried out by the Trump administration, as Ring of Fire’s Farron Cousins explains.

Good news, everyone. Donald Trump has officially decided to take his Make America Great Again agenda and take it even further by repealing a rule, or basically changing a rule at the EPA that’s going to end up allowing fossil fuel companies, power plants, things like that to put more toxic chemicals into our air. According to the new rule that was supported by Donald Trump and pushed by a assistant director at the EPA, who happens to be a former lawyer for the fossil fuel industry, this new rule is basically going to reclassify things like coal-fire power plants that spew emissions up in the air.

It’s going to reclassify them in such a way that’s going to allow them to spew more toxins into the air, and, therefore, make the air for everyone in the United States just a little bit more dirty and poisonous, because we’re not just talking about carbon emissions that contribute to climate change. We’re talking about heavy metals like mercury. We’re talking about arsenic, cadmium, chromium, things like that, things that if they get in your blood they can cause cancer, things that if you breathe in, they can trigger immediate asthma attacks and create chronic respiratory illnesses that kill about 144,000 people every single year.

That’s what the Trump Administration wants to do with this rule change that the EPA is working to finalize and eventually will put into place, because there’s nobody there to stop them. The EPA, the federal government, the Senate, the House, the Supreme Court’s controlled by Republicans. There is literally, unfortunately, nothing we can do about this right now. That’s the scariest part of this story, not just that corporations can poison us even more than they already are, but that we can’t do a damn thing about it. The only thing we can do is get to the voting booths in 2018 and 2020 and remember stories like this, remember when Donald Trump wanted to allow corporations to put more deadly toxins into the air for you to breathe. Remember that when you go to the voting booth.

These are the kinds of stories that show an almost cartoon-villain level of evil, and yet, that’s what the Trump Administration is actively working on here in the United States. They don’t care about your health. This decision alone, on top of pretty much everything else, proves that beyond any shadow of a doubt. They don’t care about you. They don’t care if you live or die as long as those fossil fuel companies or any other corporation makes a few extra dollars a year. You are so invaluable to them that they’re willing to destroy your health, your respiratory system, your circulatory system, just so that a couple of different corporations can save a few dollars a year. That is what you are worth to Republicans. Remember that the next time you go to vote.