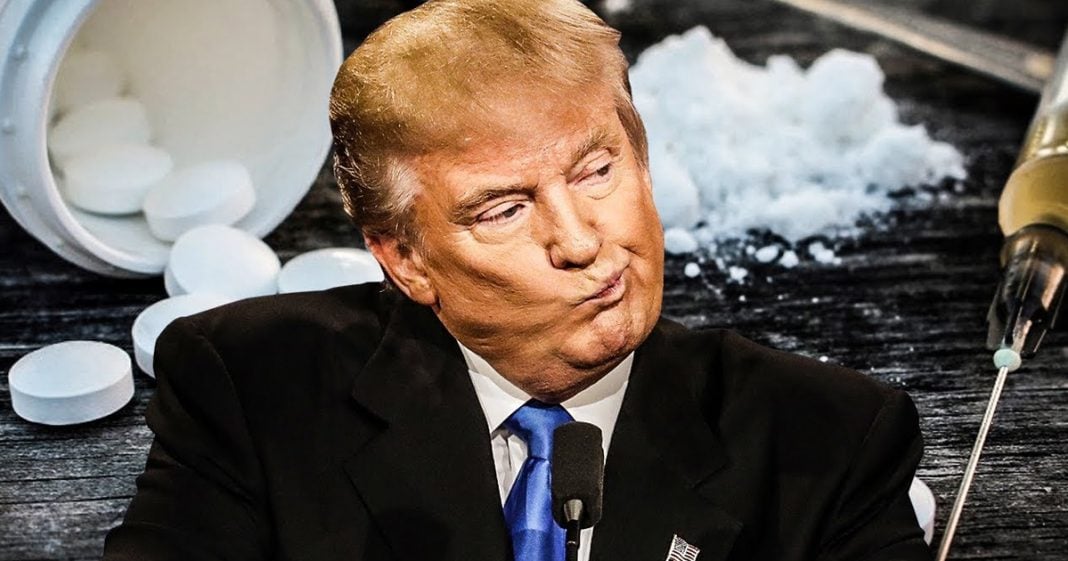 Donald Trump wants the world to believe that he and his administration are working diligently to tackle the opioid crisis, but the commission that he’s appointed to handle the situation is nothing more than a “sham,” according to one of the members of the actual commission. Trump can’t be trust to handle serious issues, and the opioid epidemic helps to prove that, as Ring of Fire’s Farron Cousins explains.

The Trump administration had promised us, during the campaign, that they were going to take the opioid epidemic in the United States seriously. From the time he was sworn in as President, he had promised us they were going to start tackling this issue any minute now. We’re going to declare this a national emergency, and we’re going to get right on that. Well, it took them months, and months, and months, and months before they even declared it a national emergency. And then, when he decided to start his opioid commission, he put Kellyanne Conway in charge of it, showing that they really either don’t understand what’s happening or they don’t care. And, according to one of the members of their opioid commission, it’s actually the latter. They simply don’t care about the opioid epidemic in the United States that’s killing close to one hundred people every single day.

Former Democratic representative, Patrick Kennedy, from the State of Rhode Island, happens to be one of the people who was appointed to the opioid commission created by President Donald Trump. He recently said that this entire commission is a complete sham. He said he’s never been so cynical about anything in his life until being on this commission, because he understands that they’re not taking it seriously. They have zero dollars in funding so they literally couldn’t do anything if they even wanted to. And it’s all for show. It’s all for the public. It’s all to give the impression that Donald Trump cares about the problem and that he’s going to do something about it when, in reality, he doesn’t understand it and he doesn’t know how to confront it because he sucks at being a leader. And that’s what’s at the heart of this here folks.

This isn’t just about Donald Trump deceiving the American public again. It’s about him being in way over his head. He doesn’t know what to do because he’s never been in a situation like this before and that’s one of the main reasons we kind of need a president who has a little bit of experience dealing with government crisis, with national health emergencies, cause that’s what we have here. Donald Trump’s not the kind of guy to take this thing seriously. He’s not the kind of guy that we should trust with this. He’s the kind of guy who should be sitting on the sidelines while responsible adults take on the issue firsthand. They take on the pharmaceutical companies, they take on the distributors. But that’s not what we have in the White House today. And, according to Patrick Kennedy, this isn’t going to change anytime soon.

So, what we’re going to see is, we’re going to see more people dying from opioid deaths. We’re going to see more profits for the pharmaceutical companies and the distributors of these pills as people continue to get hooked, and hooked, and then they die from it. Big Pharma doesn’t care. Donald Trump doesn’t care. And we’re left with virtually no defenses against this epidemic, aside from the trial lawyers that are trying their hardest to hold these people accountable for allowing this epidemic to continue unabated for more than a decade.

At least the media is paying attention to it now. The only question is, are they going to start holding the responsible parties accountable for the damage and the lives that have been lost thanks to this opioid epidemic.