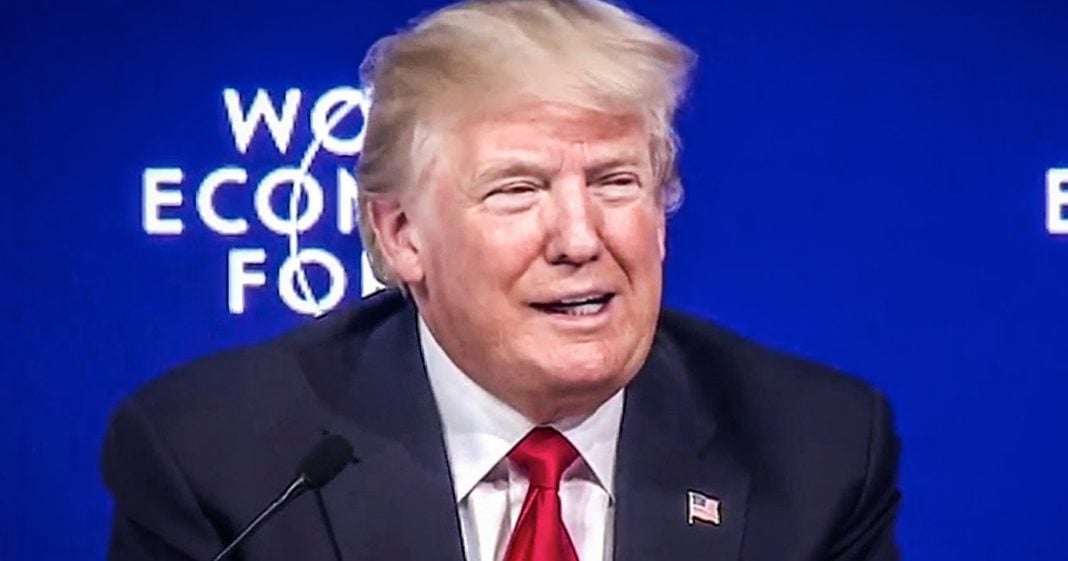 Donald Trump’s claims of “fake news” may resonate with the far right in the United States, but once he left the comfort of our shores, he learned quickly that the rest of the world won’t tolerate his infantile remarks. While speaking at Davos, Trump repeatedly began attacking news outlets as “fake” for reporting that he wanted to fire the special prosecutor last summer, and the crowd erupted in loud “boos” directed at the President. Ring of Fire’s Farron Cousins explains why these comments don’t go over very well in other countries.

Donald Trump: The other thing is, I’ve always seemed to get, for whatever reason, a disproportionate amount of press or media. And throughout my whole life, somebody will explain someday why, but I’ve always gotten a lot. And as a businessman I was always treated really well by the press. You know, the numbers speak and things happen, but I’ve always really had a very good press. And it wasn’t until I became a politician that I realized how nasty, how mean, how vicious and how fake the press can be. As the cameras start going off in the back. But overall, I mean the bottom line, somebody said, “Well they couldn’t have been that bad because here we are, we’re President.” And I think we’re doing a really great job with my team. I have a team of just tremendous people.

This week Donald Trump is in Switzerland at the Davos World Economic Forum where, to begin with, he was greeted by cheers and people shaking his hand, and very happy with him for cutting $1.5 trillion in taxes for corporations and the wealthy in the United States. Now, I know it sounds shocking that a cabal of global elitist would be happy about the fact that we cut taxes here at the United States, but they really like that plan because it’s going to save them a lot money if they want to come over here.

But, the congratulations and the cheering didn’t last for long for Donald Trump, because, see, when he went on stage, kind of doing a little bit of an interview, he started acting the press. He once again went off on a tirade on fake news, pointing to the cameras in the crowd saying, “They won’t even cover when I talk about how fake they are,” which is a complete lie. But then, he kept going on about the fake news, how the story about him wanting to fire Robert Mueller, that the New York Times broke on Thursday, that that was fake news, that everything is fake news. The crowd then erupted in audible and very loud boos and hisses directed at Donald Trump because of his attacks on the media.

See, Donald Trump is used to playing to the home crowd. He understands that here in the United States his far, far right base is not very educated. They don’t know much about world history. So when he gets up there and starts talking like a dictator denouncing fake news that obviously isn’t actually fake, his crowd loves it. They go wild for it. But when you’re oversees, specifically in countries that got to see firsthand over their borders what was happening with dictators that were acting the free press, you’re not going to get such a warm reception when you start talking like the people that those countries over there had to fight against while the United States was able to fight from far off, with the exception of our troops who were over there in Europe. We didn’t get to see it right across our border. We didn’t get to see what was happening to our neighbors because of a dictator. Only a few people who served in the military and actually went over there got to witness fully the propaganda that was coming out and what happened to the people who fell for it.

Donald Trump doesn’t quite understand that because he’s not such a smart guy, and neither is his base, and I make no apologies for saying that. At this point, you still support the guy, you’re not very bright. But, Donald Trump’s attacks on the media, as even Republicans have been willing to admit, are identical to the phrases, the words, and the language, and the demeanor that dictators of the past have demonstrated, and those people over in Europe understand all too well where that can lead, and they’re worried for us. More importantly, they’re also willing to stand up to Donald Trump and let him know that he’s not going to be able to go over to Switzerland and get away with his disgusting lies about a fake press that doesn’t actually exist.