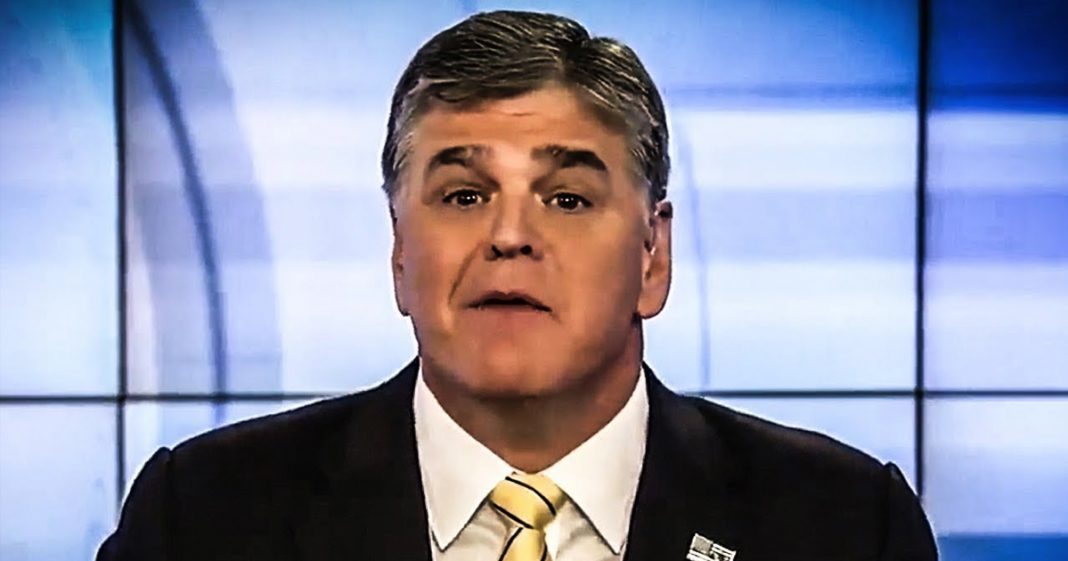 On Thursday night’s Hannity program on Fox News, host Sean Hannity told the world that the New York Times story about Donald Trump wanting to fire special prosecutor Robert Mueller was completely fabricated and that none of his sources has been able to confirm it. Just minutes later, he was forced to admit that Fox News had in fact confirmed the story, so Hannity immediately changed the subject to car chases. Ring of Fire’s Farron Cousins discusses Sean Hannity’s descent into a puppet for the Trump regime.

With the exception of maybe Donald Trump’s children, Sean Hannity at Fox News has been by far the most loyal person to Donald Trump since he was sworn in as President and sometimes that loyalty can get you in a bit of trouble. See Sean Hannity has devoted his show for the last year basically trying to debunk any kind of wrongdoing that the president does that the rest of the media reports on. And Thursday evening it got him into a bit of trouble. Take a look.

Sean Hannity: Now tonight for example they’re trying to change their story. At this hour the New York Times is trying to distract you. They have a story that Trump wanted Mueller fired sometime last June and our sources, and I’ve checked in with many of them, they’re not confirming that tonight. And the President’s attorney dismissed the story and says, “No, no comment, we’re not going there.” And how many times has the New York Times and others gotten it wrong?

All right. So we have sources tonight just confirming to Ed Henry that, yeah, maybe Donald Trump wanted to fire the special counsel for a conflict. Does he not have the right to raise those questions? You know we’ll deal with this tomorrow night. We have a shocking video of the day to bring you, by the way. This footage comes to us from Arizona where you see that red SUV high speed police chase, ultimately the suspects-

Yeah that’s right folks. Yeah. Okay, our sources confirmed it. But look there’s a car chase and then a wreck and there pieces of the car were flying everywhere. We’ll talk about news tomorrow because there is a car wreck and then the guy got arrested and we got to go to break I guess.

That was Sean Hannity’s deflection of the issue, not only, one, did he just get busted lying. Obviously somebody had to go in his ear through his IFB and tell him like, “Hey, we actually did confirm that story, so you’re going to have to go ahead and retract what you just said like two minutes ago.” But the bigger issue is that even Fox News has confirmed that Donald Trump tried to fire Robert Mueller last June and his White House counsel, Don McGahn, said, “If you fire him, I am out of here.”

That’s the bigger takeaway here. Not just that Sean Hannity is such a lapdog that he’s willing to make a complete ass out of himself on national TV and then have to admit he made an ass of himself and then try to distract us with a car wreck. But that Trump wanted to fire Mueller, the same guy that wanted to fire McCabe from the FBI. Same guy that did fire James Comey, same guy that wanted to fire everybody else who is investigating him. That doesn’t sound like the actions of somebody that has nothing to hide, yet Sean Hannity is doing his best to try to hide it for the President. And as we saw Thursday night, there’s only so much that loyalty can get you with Donald Trump when even your own network is beginning to admit that the conspiracy theories you’ve been pushing are completely false.