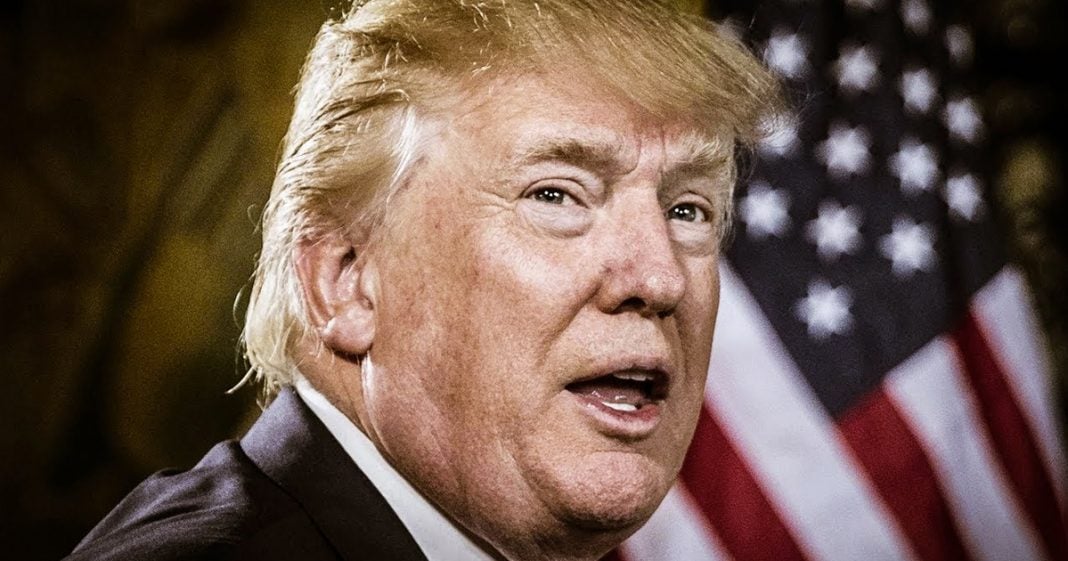 Donald Trump’s legal team was hoping to prevent the president from interviewing with special counsel Robert Mueller, but those hopes have turned into fevered dreams this week. Mueller’s team has said that they WILL be interviewing Trump, and it could be as soon as next week. Trump has nowhere left to hide, and Trump’s advisors believe that he’s walking right into a perjury trap. Ring of Fire’s Farron Cousins discusses this.

On Tuesday it was announced that Robert Mueller, the special prosecutor, would love to interview Donald Trump about the firings of Michael Flynn, his former national security advisor, and James Comey, the former director of the FBI. And, that the would love to get these interviews rolling as soon as next week if possible. Now, the Trump administration about a week ago, responded to Mueller’s request for an interview with Donald Trump by just sending written answers over to him, hoping that that would be enough. They were essentially trying to hide Trump from having to go and talk to Mueller directly.

Well, that didn’t work. There’s no where left for Donald Trump to hide and if he wants to continue on as President, at least for now, he’s going to have to go talk to Mueller. And considering that reports are saying he wants to talk about the firings of Flynn and Comey, it is very likely that right now this interview would center mostly on obstruction of justice charges against Donald Trump.

Here’s what we know and what we still need to know about all of this. First and foremost, reports are saying that is about the Comey and Flynn firings, so that would lean towards obstruction of justice. A few other reports have said that it could also deal with financial dealings with Donald Trump himself which would point the investigation in a similar though slightly different direction. We do not necessarily know at this time what exactly he will be questioned about, but we do know in the last few days it came out that Michael Flynn when he interviewed with Mueller, did not let Donald Trump know that he was going to do this. Flynn has now hired a lawyer who is notorious for making plea deals and working with prosecutors to hand over evidence so that’s a plus on Mueller’s side and probably a pretty scary thing for Donald Trump’s side.

We also know that Donald Trump has allegedly had pressured the director of the FBI to fire Andrew McCabe and Ray, I forget which way that goes, everything’s getting a little confusing at this point, but either way that could also potentially be obstruction of justice. So, Mueller has a lot to work with at this point. Donald Trump has no where left to hide, his written answers recently clearly were not sufficient for Mueller or they opened up even more doors than Mueller thought that he had available. The bottom line is that Donald Trump is running out of room. He’s running out of places to hide and he’s running out of excuses. According to reports, even his top advisors are warning him that he could be walking right into a perjury trap with the special prosecutor because he has no idea what everybody else has told him.

Again, that’s how investigations work to see if you can catch somebody in a lie and they’re terrified that Donald Trump is going to walk right into a trap set by Mueller and end up committing some type of impeachable offense that has nothing to even do with the actual investigation and any crimes that may be uncovered there. Donald Trump may in fact commit a crime while talking to special prosecutor, Robert Mueller. To be honest, I think a lot of us are hoping for that. I think we want to see Donald Trump go in there, lie his ass off to a guy that can prove that he’s lying, and finally get a little comeuppance in his life. Because as much as this is about protecting the office of the presidency and protecting our system of government here in the United States by removing this corrupt individual, it’s also about somebody who has skirted the law for 70 years of his life. Somebody who has committed acts so disgusting and so heinous that it would have landed most people in prison. Yet he continues to get away with it.

Robert Mueller could be the person to finally bring justice to the Trump family and as a side effect possibly save the office of the presidency from further tarnish from Donald Trump. Time will tell, hopefully this interview is going to take place sooner rather than later although it could be as far as a month out. Maybe even longer. Hopefully Trump agrees to just get it over with, meets with them next week, and then we start to get some real answers and hopefully real indictments from this investigation.