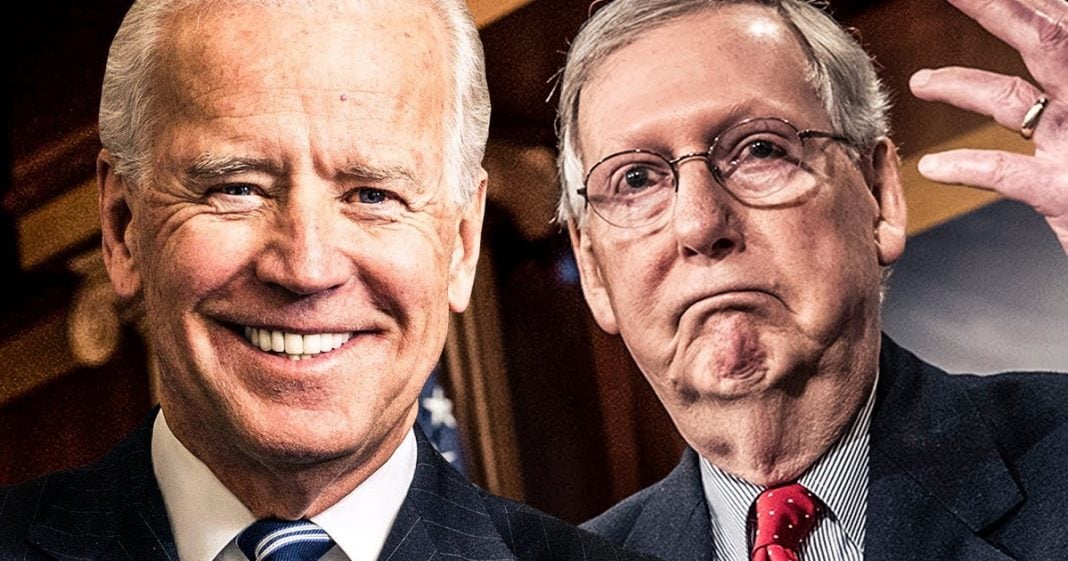 During a recent interview, former Vice President Joe Biden confirmed reports that it was Republican Senate Majority Leader Mitch McConnell who blocked President Obama from warning the American public about Russian election interference ahead of the 2016 election. Even though US intelligence agencies had evidence that this was taking place, McConnell refused to let the American people know that their country was basically under attack. Ring of Fire’s Farron Cousins discusses this.

According to Joe Biden at a recent speech at The Council on Foreign Relations, it was Mitch McConnell who blocked a bipartisan effort by former President Barrack Obama to warn the American public about possible Russian interference in the 2016 election. According to Biden, and this had actually been reported by several media outlets in the last few months, Biden just confirmed it yesterday. But the way the situation played out was that we many different intelligence agencies, here in the United States, that came to the President and Vice President and said, “Look, we have proof, we have evidence, that Russians are trying to interfere with the 2016 election.” So, they took that evidence, they drafted a bipartisan letter, wanted to Mitch McConnell to sign onto it, and then they were going to officially release it so that the public understood what was at stake in 2016, and who was trying to influence this election. Mitch McConnell refused. And according to McConnell’s office, though, he didn’t fully refuse because he still signed onto a letter that told states that their electronic voting systems need to be more secure because we don’t want anybody to hack into them. That particular memo did not contain the word “Russia”, it did not mention any specific threats, and it did not go any further other than the cyber security issues of our voting machines.

Here’s the problem with all of this: first and foremost, if this report is true, we have no reason to think that it is not, but the administration knew that Russia was trying to interfere with the 2016 election. Biden says the reason they didn’t just come forward with it without McConnell, was because then it would look like the Democrats were simply trying to sway the election, or otherwise favor Hillary Clinton, and they didn’t want to do that. They didn’t want to come forward and have people accuse them of working actively against Donald Trump or trying to undermine his campaign. That’s, you know, probably a bad decision in hindsight on their part, considering what James Comey did shortly before the election. So, Obama and Biden just sat on their hands, sat on this information. The intelligence agencies just sat on this information and did absolutely nothing about it. Mitch McConnell knew about it, he knew that there were threats, but he only focused on the cyber security one and completely ignored all the other attempts coming from Russia to influence the United States election, and hack into the DNC emails, which they have admitted to.

At this point, it’s very obvious that yes, Russia interfered with the 2016 election. I know there’s still quite a few people out there saying that it didn’t happen, and those that say it did are just trying to start a new Cold War. Well trust me, I don’t want to start a new Cold War. I don’t want to start a new ground war. I don’t want to start a war, period, with anyone. But at this point, if you continue to deny that Russia had some kind of role in the 2016 election, or that they at least attempted to sway the U.S. vote in one way or another, be it through spreading fake news, and these trolls online, or whatever, if you deny that this stuff happened, then you’re either being completely oblivious to what’s going on, or you’re being incredibly dishonest with both yourself and everyone else in this country. I’m tired of hearing people say like, “Ah, this is such a lie, it’s such a conspiracy.” Well, it’s not. We have intelligence agencies, we have the former President, former Vice President, bipartisan groups of members of the House and Senate who admit that, “Yeah we know that this did happen.”

We have admissions from Russians who say, “Yeah, I did it.” And if you still deny it in the face of all that, then I am assuming, to basically paraphrase Upton Sinclair, you’re paycheck depends on you not understanding that this happened, because that’s the only excuse at this point for these apologists. They have something to gain from denying that Russia interfered in some way. And my position on this issue has evolved over the last year as more information has come out. Just as I said from the beginning, as we learn more, we’ll see where my personal opinion goes. But now, there’s not a doubt in my mind that at least to some degree, Russia did try to interfere. I don’t know how to handle that. I don’t know what the appropriate response from the United States should be. It shouldn’t be war. It shouldn’t be dropping bombs. It shouldn’t be retaliating and interfering with their elections through you know, hacking and what not. But there has to be something. There has to be very strong sanctions. There has to be something to cut off the propaganda that these fake bots are spreading on Twitter, and the fake news, and all that. Something has to give because it’s not just the 2016 election that was at stake, it’s every election since then, or past then, or future, whatever.

Everything from this point forward could be at risk, because Republicans were too greedy and selfish to go out there and warn the public when they had the opportunity. Everybody’s been warned at this point. If we continue to ignore it or completely deny that it even exists, then we’re living in the same distorted, disgusting reality that Donald Trump, himself, is living in. And I, for one, am not going to be a part of that altered reality.