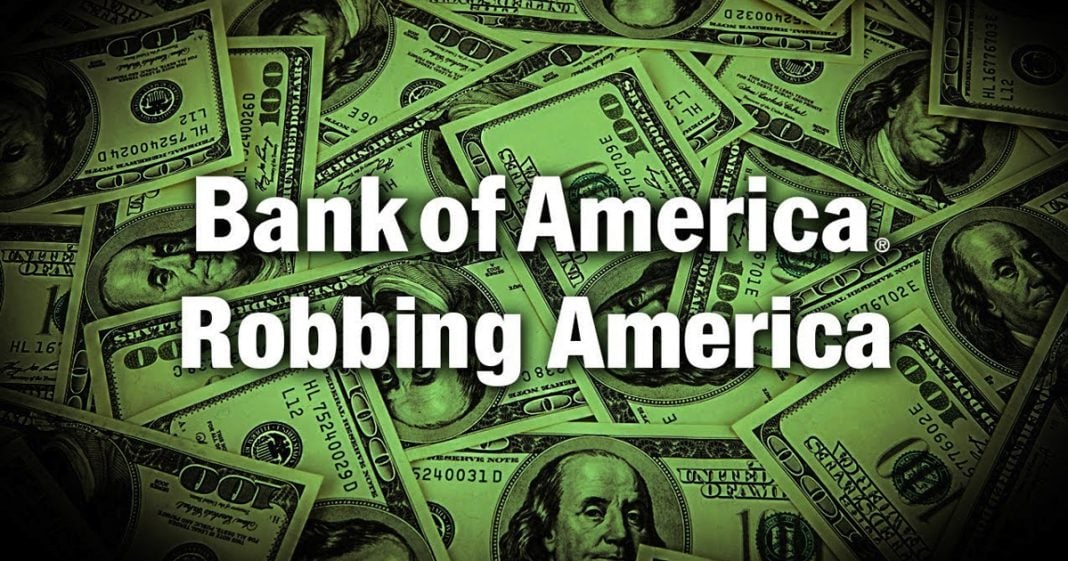 Bank of America has announced that they will be ending their highly-popular free checking account program, and any user that cannot maintain a $1,500 balance or get direct deposits totaling at least $250 a month will now be charged $12 per month for the privilege of having a checking account. This blows up the Republican talking point that their tax cut package is going to benefit all of us, and proves that corporations are not interested in helping low income people with the tax breaks they just received. Ring of Fire’s Farron Cousins discusses this.

As we all know corporations in the United States were just treated to a massive tax cut thanks to Republicans, but those same Republicans promised us that these corporation were going to pass the savings on to us in the forms of either higher wages, more jobs, more innovation or possibly even more savings to us when we go and use their products. Well as it turns out and as every single rational thinking person predicted and as corporations told us they were going to do, we’re not getting any of that tax cut savings and in fact, Bank of America, one of the recipients of millions upon millions of dollars in tax breaks announced this week that they’re actually going to start charging poor people more money because they’re too poor to have enough money in their bank accounts.

The new plan by Bank of America is going to start charging low income people in the United States $12 per month to just have a checking account unless of course you can maintain a balance in that account of at least $1,500 per month every day, all times of day you never drop below that $1,500 or if you get direct deposits totally $250 or more per month. Now the direct deposit thing I understand, a lot of people are thinking well that seems easy, any paycheck direct deposited. Well guess what folks? Most businesses in the United States do not actually use the direct deposit system. People still get paper checks. Construction workers, minimum wage workers at fast food restaurants, restaurant workers in general, a lot of big box store employees still receive paper checks. They will not be or have access to that direct deposit. As far as $1,500 every single day no matter what goes, I don’t qualify for that either.

I’ve got the direct deposit thing, so I’m okay but most of us cannot afford to keep $1,500 in our checking account every single second of every single day. This is essentially the bank deciding to put a tax on poor people after they got millions upon millions in tax breaks. We’re not saving money, we’re not making more money. We’re getting screwed over by companies like Bank of America who just want even more money in their pockets. That’s what this is about, that’s what this has always been about. Anytime you give a corporation the opportunity to do the right thing they will nearly 100% of the time do the wrong thing. They could have made checking free for everybody. Hell, they could have given every one of their customers $10 in their checking account just because, because of this tax break. Instead, they’re going to start taking away more money from the people who have the least. That is what corporations do. That is what Republicans do and that is what has to change in this country.

You know it takes me time to the primaries when Bernie Sanders was getting attacked in the media because he sounded like a one trick pony who only talked about income and equality and these horrible corporations. Well guess what? Every single thing that Bernie Sanders warned us about in the primaries has come to bear. Every single thing. What’s happening right now with these tax cuts for corporations and the fact that they’re still squeezing consumers even worse than they were before is further proof that what Bernie Sanders had said, whether you support him or not was 100% accurate and it is 100% what’s happening today.