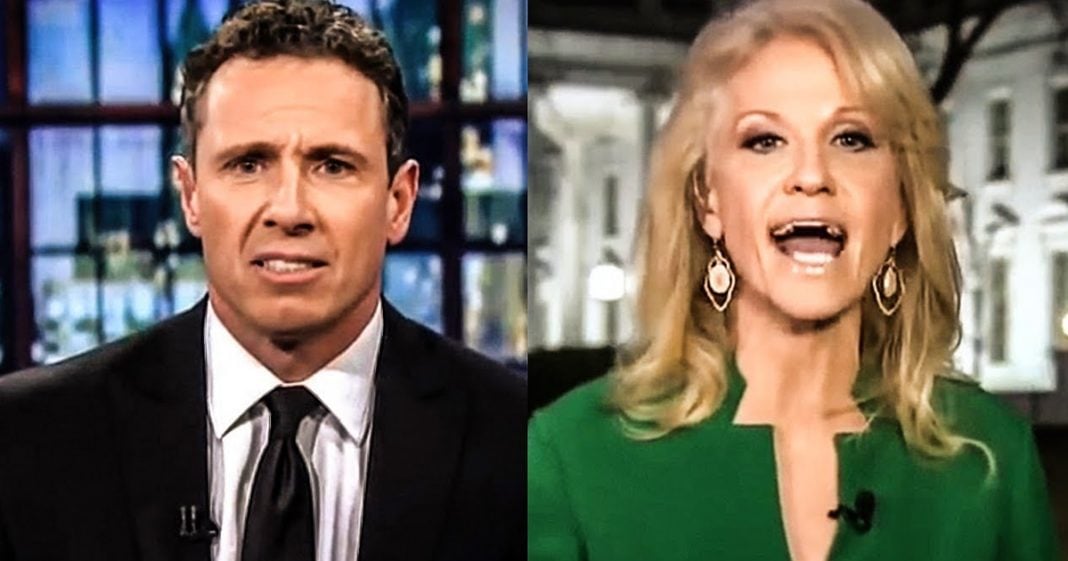 CNN’s Chris Cuomo seems to be a glutton for punishment, as he decided to invite White House counselor Kellyanne Conway back on his program (clip starts at 00:55)to discuss the budget shutdown and the future of immigration reform. It only took a few minutes for the interview to turn into a lie-filled shouting match on the part of Conway, and Ring of Fire’s Farron Cousins explains why she might be the most dangerous members of the Trump administration.

CNN’s Chris Cuomo seems to be a glutton for punishment. A couple weeks ago he had an interview with Kellyanne Conway that went off the rails pretty quickly and so he decided this week to once again have Kellyanne Conway on for a very, very long interview that went off the rails even faster than their last interview. See, Chris Cuomo invited Kellyanne on to talk about the government shutdown ending and what is in store for the future of DACA and immigration here in the United States. It basically took less than a minute and a half for this interview to just go completely insane.

Here’s a clip of some of things that transpired in that interview. It’s a long clip. The full 13 plus minute interview is linked to in the description of this video but take a look at this clip and just see how crazy Kellyanne Conway became during this interview.

Chris Cuomo: When did I say that?

Kellyanne C.: Everything’s not fine at the border.

Chris Cuomo: When did I say that? I said that none of them say a wall is a panacea.

Chris Cuomo: I’ve been with them.

Kellyanne C.: That is not true that none of them say it.

Chris Cuomo: I’ve been with them.

Kellyanne C.: Okay, Christopher, so you took a trip to a border. I think that’s lovely. You wore khaki’s that day and took a trip to the border and the rest …

Kellyanne C.: And the rest of your life you spend in Manhattan. Stop it. These are honorable people at the border fighting everyday for your freedom and your safety. Cut it out. I don’t want the poison coming over the border and into my community.

Kellyanne C.: Do you?

Chris Cuomo: Kellyanne, if you think that …

Kellyanne C.: Do you think a sovereign nation …

Chris Cuomo: If you think you’re going to distract by telling me that I’m some type of urbane guy who doesn’t care about border patrol agents, that’s silly. We both know.

Kellyanne C.: I figured if I made it about you you’d at least stop talking for a second and you did.

Chris Cuomo: We both know, I’ll tell you what. I’ll send you a transcript of this.

Kellyanne C.: I want to tell you something.

Chris Cuomo: When we’re done with the interview and I guarantee you three to one words over me. Three to one.

Kellyanne C.: I want to tell you something.

Chris Cuomo: You know how I know that?

Kellyanne C.: The idea that …

Chris Cuomo: ‘Cause I’ve looked at all the transcripts and you’re always at least three to one over me.

Chris Cuomo: He cares about the Dreamers but he’s going to attach things and not give them a clean bill and he’s going to put out an ad saying that they’re all monsters who are terrorists. And then the White House says, “It’s not us.” Is that true Kellyanne?

Kellyanne C.: Christopher, where is the bill? I just want a specific.

Chris Cuomo: He signed it. It’s no longer a bill.

Kellyanne C.: No, no, no, no, no. I know that. I’m very excited, he signed it minutes before I walked out here, we just all got the text messages from the OMB that we’re able to, our colleagues are able to go back to work tomorrow. I think that’s wonderful for people who have been white knuckled all weekend wondering when the Democrats were going to grow up, reopen the government so we can reopen negotiations on what they say they care about DACA. But hold on, I am not going to let it lie that a sovereign nation like ours doesn’t deserve to have a physical border. We have spent billions over decades protecting other nations.

Chris Cuomo: We do have a physical border.

Kellyanne C.: We need to, no don’t. It is porous and the idea that we have a catch and release law where we catch someone who’s coming over illegally and they get released into the interior of the United States, we can’t do anything with them.

Chris Cuomo: What are you talking about?

Kellyanne C.: Do you understand that we are trying …

Chris Cuomo: What circumstances does somebody catch someone crossing the border illegally and then let them go?

Kellyanne C.: Many. They can’t detain them after a while. There are many circumstances.

Chris Cuomo: What do you mean after a while? What are you talking about?

Kellyanne C.: How many of Donald Trump’s 70 points in his immigration plan have you read or do you know?

Chris Cuomo: Zero, you never sent it to me.

Kellyanne C.: Not many because Democrats, oh it’s posted for all to see. The President announced it about two months ago.

Chris Cuomo: He has a 70 point plan, why did Mitch McConnell say he doesn’t know where he is on immigration?

Chris Cuomo: Why did Mitch McConnell say he doesn’t know where he is?

Kellyanne C.: Christopher, I think Mitch McConnell did a great job today holding his conference together.

Chris Cuomo: Good then answer my question. Then why does he say he doesn’t know where the President is?

Kellyanne C.: And patiently working with the President all weekend.

Chris Cuomo: Then why does he say he doesn’t know where the President is?

Kellyanne C.: I know this is very disappointing to many people who thought they could talk about a shutdown, have the shutdown day.

Chris Cuomo: Why does Mitch McConnell say he doesn’t know where the President is?

Kellyanne C.: But look what we didn’t do. We didn’t weaponize the shutdown because we weren’t in charge of it. The Democrats did it and they weaponized the shutdown.

Chris Cuomo: It didn’t work so well for you last time in 2013. This time it’s the first shutdown we’ve ever had with one party in control of both houses of Congress and the White House ’cause you weren’t able to work with the other side.

Kellyanne C.: The problem with shut, Christopher, they started the shutdown. They had to end it. What, were we supposed to work with them and help them shut down the government?

Kellyanne C.: Work with them to do what?

Chris Cuomo: They didn’t reach out.

Kellyanne C.: Chris, work with them to do what?

Chris Cuomo: All right, I gotta take a break.

Chris Cuomo: You should’ve offered them something.

Kellyanne C.: Now they showed why they’re in the minority. We saw once and for all tonight that they killed, they’re going to kill themselves in the midterms.

What’s really scary about watching Kellyanne Conway speak is the fact that she lies with such impunity. That it is easy to see why people get sucked into her. She believes what she’s saying. She doesn’t think that these are lies. This is the reality in which she lives. Anyone trying to contradict her or present her with facts and figures and statistics is a liar. There is something mentally wrong with Kellyanne Conway and I do firmly believe that she is the most dangerous member of the Trump administration because she has no problem lying. I mean, yes they all lie. They all lie constantly. But the passion with which Kellyanne Conway pulls it off is what is so terrifying about her.

That is why these media outlets love her. CNN loves it because they can make a fool of her which they clearly did in that interview. Fox News loves her because her lies confirm everything that that network lies about all day long. She is their darling. She is great for their ratings and they know that she’s going to give them gold every time whether by confirming what they believe, like on Fox News or by making a complete ass of herself as she does on CNN.

Personally I think Chris Cuomo should move on. It’s funny to watch her sit there and flail and get loud and yell and accuse him of wearing khakis as if that was relevant to anything at all but I don’t think he should have her back on and I don’t think any nonpartisan, bipartisan or even partisan media outlet should extend her another invitation. She is a cancer on this country. And what do you do with cancer? You have it removed. And these networks need to have their Kellyanne Conway cancer removed from the air immediately.