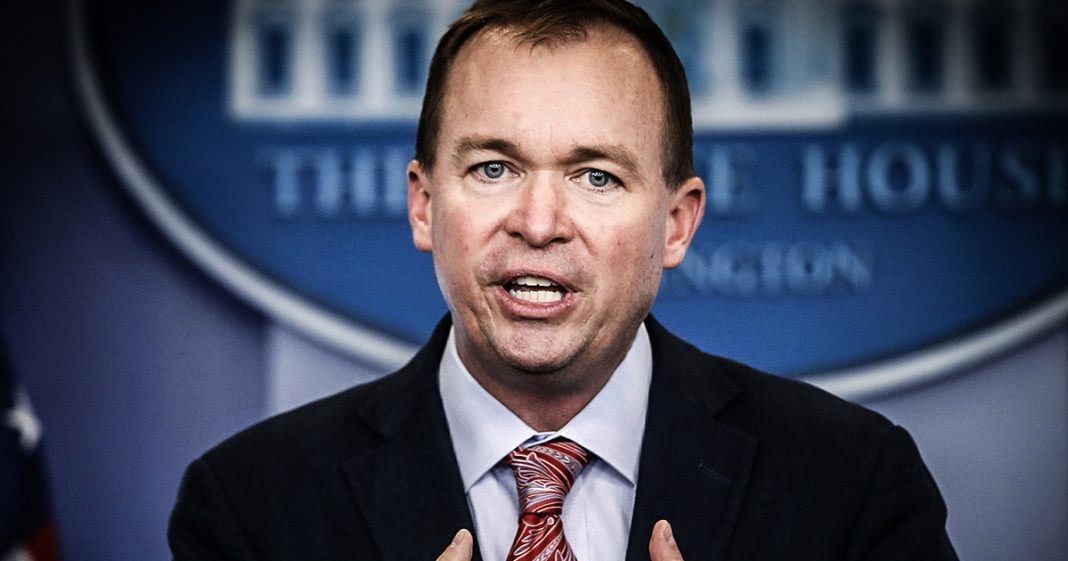 Mick Mulvaney, the man that Trump installed as the head of the Consumer Financial Protection Bureau, has decided that his agency has plenty of money and therefore requested ZERO dollars for his 2nd quarter budget this year. Mulvaney claims that the backup budget at the agency will suffice, but Ring of Fire’s Farron Cousins explains what’s REALLY behind his request for no operating budget.

Mick Mulvaney, the head of the Consumer Financial Protection Bureau, the guy that Donald Trump hand picked to run that agency to protect consumers from financial fraud and other schemes by Wall Street bankers, has decided that for his second quarter 2018 budget he’s going to request zero dollars for his budget.

According to Mulvaney, the reason he doesn’t want anymore money is because there’s some kind of backup account that has a couple million dollars in it, and he thinks that is more than enough to fund his little agency for the entire second quarter of 2018.

Here’s the real reason though. Mulvaney doesn’t care that there’s a backup account and he just wants to burn through that cash because he claims that backup account might even be illegal. The dumbest legal argument ever made. He wants no money because he doesn’t want the CFPB to exist. Republicans do not want the CFPB to exist. They have tried to shut it down from the first time it was even proposed. They do not like the thought of a government organization who’s sole purpose is to protect consumers in the United States.

Any consumer out there who is somehow against this organization, which is probably a lot of people who watch Fox News, what the hell are you thinking? It’s literally there in the title of the organization, Consumer Financial Protection. It’s an organization designed to help you when Wall Street banks rip you off, which we’ve seen them do countless times in the last 17 years, if not even longer than that.

We finally had an organization that was going to stand up and say, “You know what? You do this we’re going to pop you. Maybe we’re not going to put you in prison even though that’s where you belong, but we’re going to hold you accountable.”

For a guy like Mick Mulvaney, he believes that zero dollars is way more than enough to run that organization and to protect consumers because to republicans, protecting consumers is literally worthless.