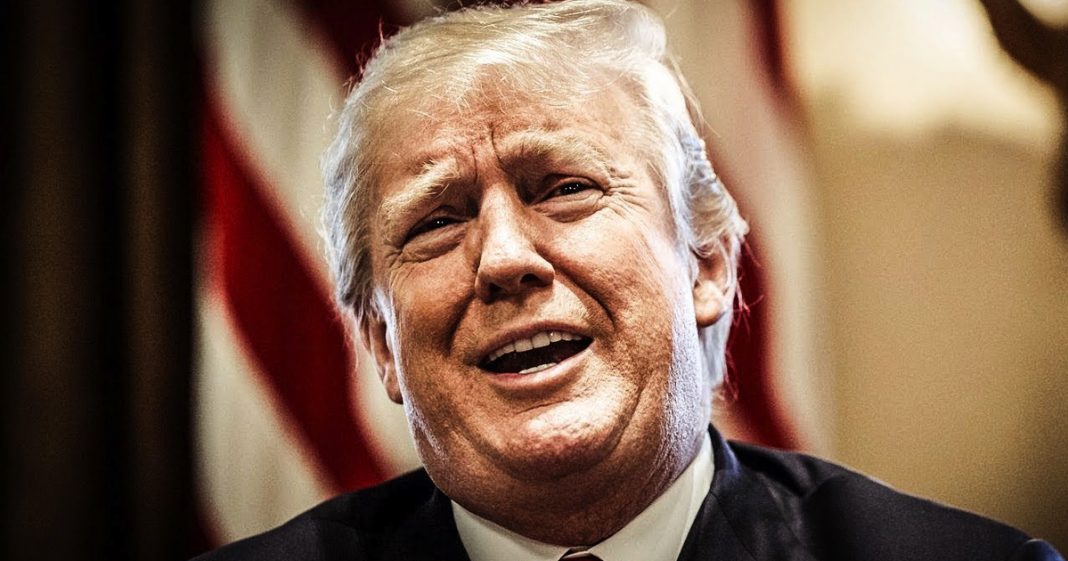 According to a new report, aides to the President are trying everything they can to keep Donald Trump quiet and away from the public (and lawmakers) during the government shutdown. But they aren’t doing it to protect him – they are doing it to protect themselves. All of these aides, like Stephen Miller, have agendas, and they believe that Trump will strike a deal that would hurt their own anti-immigrant agenda, so they are trying to keep him out of sight and out of mind. Ring of Fire’s Farron Cousins explains.

Donald Trump’s administration has been doing everything they can to convince us that since the government shut down on Saturday morning, he has been working really hard. They released a couple of very awkward photos of him in his office attempting to act like a working human being that only proved that he’s not doing a damn thing since the government shut down, but nonetheless, they’re trying to tell us that he is working, and to be honest, over the last two, two and a half days, he has been very quiet.

See, if you will remember, back before the shutdown even happened, Donald Trump had been working with Democrats and Republicans, and they all had agreed on a deal. Everybody at the table, they weren’t getting everything they wanted, but everybody was getting something, regardless of how horrible it was, in the case of Donald Trump and funding for his stupid border wall, but they’d all agreed on it, and it was going to happen.

But then, Donald Trump’s aides got to him, particularly Stephen Miller. They said, “You can’t do this. You can’t make this deal. Don’t agree to this,” and so he didn’t, and so it died, and so the government shut down. Now these very same aides are trying to keep Donald Trump away from politicians so that he can’t make another deal.

Stephen Miller is one of the biggest culprits here, because he is one of the most aggressive anti-immigrant people in the Donald Trump White House. He is, for all intents and purposes, a massive racist who doesn’t want brown people coming into this country. That’s what this is about, so he’s not going to let Donald Trump make a deal on the Dreamers. He doesn’t care that 9 million children under the CHIP program do not have funding for their health insurance. He does not care that our military is not getting paid. He doesn’t care that the government shut down, and national parks are going to lose millions of dollars, because they can’t have people come in.

His concern is that he doesn’t want people that don’t look as lily white as him from coming in to this country, and he’s going to make sure that Donald Trump doesn’t make a deal, and that is why Donald Trump’s staff is trying to keep him silent throughout this government shutdown. They are the ones pulling the strings here, and Donald Trump, as I’ve said a million times before, and I know I’m going to have to say it a million more times before this guy is removed from office, and maybe even more after that, but Donald Trump is not a smart human being. He has no idea what he’s doing. He is 100% dependent on these evil little assholes that he’s surrounded himself with, and they are the ones trying to obstruct any deal that might come out.

Don’t get me wrong. Donald Trump is perfectly evil, right there with the rest of them, but he’s also dumb as a brick. I’m sorry if you happen to disagree with me. The facts kind of say otherwise. If Donald Trump knew what he was doing, if he knew how the government worked, if he knew how to negotiate — this alleged great negotiator — if he knew how to negotiate, we wouldn’t be in this situation. But, more importantly, if he hadn’t surrounded himself with some of the most racist people he could find, we also currently wouldn’t be in this situation.

The fault of the shutdown lies at the feet of Donald Trump, the Republican party, and jerks like Stephen Miller, and until they get out of the picture, I don’t see this situation wrapping itself up anytime soon, unless, of course, the Democrats decide to cave in, say, “Screw those 9 million children, screw the hundreds of thousands of Dreamers, and screw everybody who doesn’t want us to pay for a border wall, so here’s your funding.” Those are the only scenarios in which this problem ends swiftly.

If Stephen Miller is still right there in Donald Trump’s ear, saying, “Don’t let non-white people into this country,” this shutdown’s going to go on for a very long time.