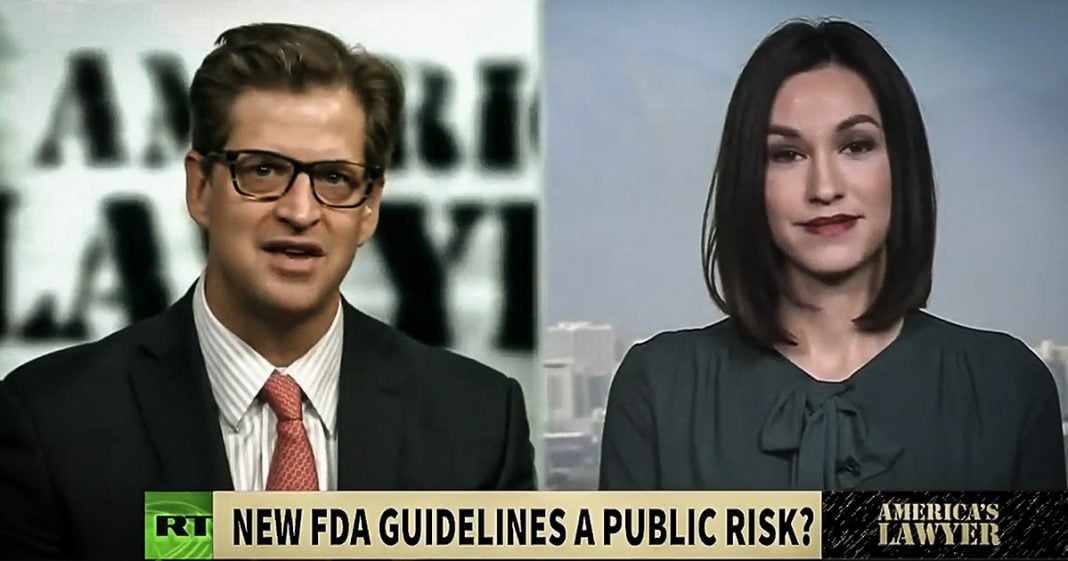 Via America’s Lawyer: Peter talks with Brigida Santos about why the FDA plans on allowing unapproved medical devices to hit the market and why some believe this to be dangerous.

Peter:
Medical devices that have not been proven to work or to be effective may soon be flooding the market. The FDA announced this would be the case as they plan to establish new approval guidelines to quickly get new devices into the hands of consumers. Medical organizations are saying this decision is in the interest of big industry but not the public. Joining me to discuss this is RT correspondent Brigida Santos. Brigida, thank you for coming. A doctor with Public Citizen’s Health called out the FDA commissioner, Dr. Scott Gottlieb’s decision as pro-industry and risky for the public. What do you know about Dr. Gottlieb’s background that’s probably influencing him with his decision making?

Brigida Santos:
Peter, before Gottlieb headed up the FDA, he was a partner at a venture capital fund called the New Enterprise Associates, which invests in technology and health care companies. Of course, he wants to fast track these technology and health care products onto the market. He wants an even faster lane than the one that already exists under the FDA’s 510(k) program, which basically allows any product to be fast tracked onto the market if it is similar to another product that’s already on the market.

He basically wants to take that requirement away from the already fast track lane, and create another lane that allows products that are technically similar, whatever that means. What I do know that it means is that a lot of approval requirements will be ditched, clinical testing and even evidence of safety and efficacy will go away, so classic deregulation here, Peter.

Peter:
Just another example of that revolving door from industry to regulator and back again, to capitalize somewhere down the line on your own regulation that you have control over. Can you tell us the arguments that the FDA is making to release under-tested devices to the public? As far as you know, does it hold any ground, does it hold any substance to it?

Brigida Santos:
The FDA’s argument is that the approval process for devices and drugs is incredibly cumbersome, it takes a long time, and it stifles innovation. Of course, there’s a little bit of credibility to that because most government agencies are very slow in their processes, and the FDA does require quite a bit of testing for drugs, years sometimes. But it doesn’t mean that we should be fast tracking products onto the market if they’re not safe, because you’re playing with human lives here, and if they’re not tested and they go on the market, people are likely going to get sick or possibly even die, Peter.

Peter:
Right, it sounds good in the concept to get it out as fast as possible, but if they’re not tested … I mean, does the FDA have a record of releasing devices and drugs into the public that turned out to be ineffective, or as you said, in some cases even lethal?

Brigida Santos:
Yes, they do have a record of doing so because they fast track things so much. We’re unable to tell exactly how many devices result in death and injury because there’s no national database that tracks these devices in people, so people may be going in for a metal-on-metal knee replacement and they might be getting sick from it, but it’s unclear whether the correlation will be made by the doctor or if it is made, it’s unclear whether the public will be notified and people can pool their information to find out how many people are getting sick.

But this does happen. I can give you one example. There are stents that are used to treat patients suffering from brain aneurysms. People have died from those devices, Peter.

Peter:
Yeah, I mean, the FDA uses the statute called the 510(k) to get some medical devices into the market faster, and this is what Dr. Gottlieb wants to expand. How effective were those devices released using the 510(k)?

Brigida Santos:
As I said, it’s unclear how many were effective or ineffective, but I can tell you that 95 to 98% of all medical devices that are on the United States market, meaning they are for sale, those have been fast tracked under the FDA’s 510(k) program. A majority of these devices on the market have not been tested, there’s no clinical trials, and we don’t know whether or not they are safe. These devices are classed in three different tiers, with the class three classification being the most serious devices. These are high-risk devices that support life. Things like pacemakers and heart valves, these require more testing, but that’s about 1 to 2% of all devices. A majority of the devices on the market are being tested once they’re inside of a patient’s body. There’s no way of knowing what happens once you do that.

These patients are rolling the dice and unfortunately they don’t even know that they’re rolling the dice because they assume that their doctors and the FDA, which has given its stamp of approval here by fast tracking it, have done their job in researching these products, but that’s not the case here, and patients unfortunately do end up dying or having health problems for life as a result, Peter.