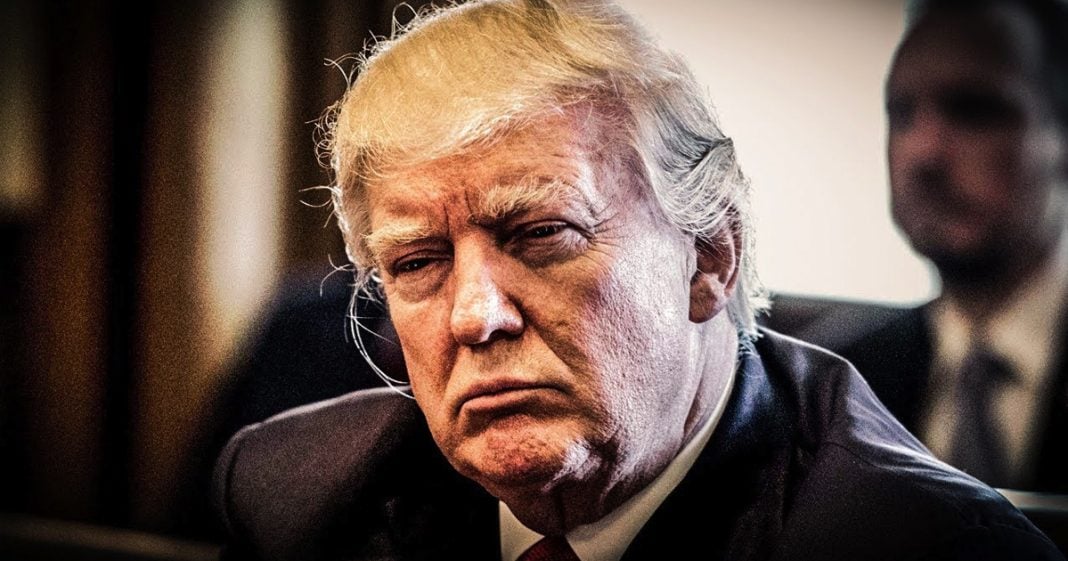 According to a new voicemail greeting on the White House comment line, Democrats are solely responsible for the government shutdown and the fact that members of the military will not get paid during this time. Not only is this an outright lie, but it is a clear violation of federal law. Ring of Fire’s Farron Cousins explains how this action violates the Hatch Act, and more importantly, why Republicans are the ones responsible for the government shutdown.

Saturday of this past weekend was officially the first full day of the government shutdown. Also happened to be the one year anniversary of Donald Trump’s inauguration, meaning that he was only able to keep the government running fully for one year since being sworn in. But people who decided to call into the White House this past weekend into their comment line heard a very strange prerecorded voicemail greeting when you called that number. Here is what the voicemail had to say:

Voicemail Message: Thank you for calling the White House. Unfortunately, we cannot answer your call today because congressional Democrats are holding government funding, including funding for our troops and other national security priorities, hostage to an unrelated immigration debate. Due to this obstruction, the government is shut down. In the meantime, you can leave a comment for the president at www.whitehouse.gov/contact. We look forward to taking your calls as soon as the government reopens.

Okay, so there’s several things that are wrong with this particular voicemail message. First and foremost, it obviously blames the Democrats for the entire government shutdown, which is simply not true. Anybody who had been following along with what was happening in D.C. all of last week, trying to make deals, things like that, Democrats and Republicans, and even Donald Trump himself at one point, they’d all agreed on a funding measure that would have kept the government running, would have given the Democrats some of what they wanted, would have given Trump some of what he wanted. But, at the end of the day, they decided, you know what? We’re not going to go forward with this deal because Donald Trump has suddenly pulled his support out from underneath it. The Democrats then attempted to pass a bill that would at least guarantee pay from members of the military, which Republicans then killed. Think about that for a second. Democrats attempted to keep members of the military paid during the government shutdown, but Republicans decided not to go along with that. Again, contrary to what the voicemail message says.

Second of all, they’re not just siding with illegal immigrants. They’re trying to protect children and young adults in this country who have been working, who are going to school and paying tuition, they’re paying taxes, they’re helping to support this country, and so yeah, it seems only fair to allow them to stay when they’ve been here for years, and years, and years and they are actively contributing to society. I don’t see anything wrong with that, nor would any rational thinking human being.

But the most important about this stupid little voicemail greeting is the fact that it is technically, by definition, illegal. You see, there’s a little thing called the Hatch Act. What that does is it prevents government employees working inside the White House from engaging in any kind of political support for one candidate or party and, two, it prohibits them from using government equipment to do so. Since this voicemail was anti-Democrat, it could be seen as pro-Republican, therefore establishing dominance of one party, support for one party, over another one. Second of all, it obviously had to have been recorded on White House government equipment, making the entire message a very clear violation of the Hatch Act.

Now, there’s a couple of caveats to the Hatch Act. First and foremost, the president is exempt from it. Donald Trump himself is not looking at any legal issues here. People like General Kelly and other very high ranking aides to the president are also exempt. This woman on the voicemail, even though I’m sure she was directed to and did not do this of her own accord, is none of those things. She is a regular government employee who is prohibited from doing this on government equipment in the White House. Yet, whoever directed her decided to forgo that knowledge, didn’t bother to tell her that, “Hey, by the way, this is a crime what I am asking you to do. But don’t worry. Nobody’s going to go to jail. There’s not even going to be an investigation of it, even though it’s very clear textbook violation of the Hatch Act.”

But like so many other things we’ve seen in the past, Donald Trump and his administration are going to get away with this. Nobody’s going to hold them accountable. They’re going to continue blaming Democrats for the shutdown as long as it goes on. But all of that is a lie. At the end of the day, the blame for this shutdown lies at the feet of Republicans. According to the latest rounds of pollings from every available poll, the majority of Americans actually agree with that. They understand that it’s not the Democrats who are the minority party in both the House and the Senate, but it is instead the Republicans who are at fault for the government shutdown, as they control all three branches of the federal government.