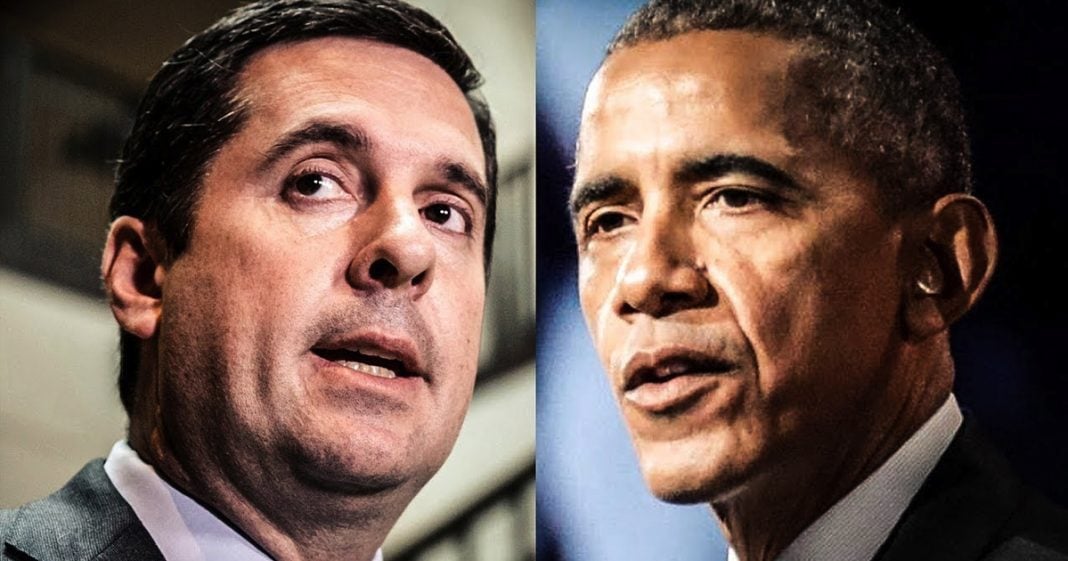 Republican Representative Devin Nunes, the chairman of the House Intelligence Committee, claims that he has drafted a memo that proves that the former Obama administration engaged in criminal activity by illegally surveilling Donald Trump and his staff. Fox News has called the memo “worse than Watergate,” and other GOP Representatives claim to be “shocked to the core” over the memo. So why isn’t the FBI acting? Because they aren’t allowed to see the memo – in fact, few people outside of the Republican members of Congress have even seen it. Ring of Fire’s Farron Cousins explains why this memo is the real “nothingburger” that Republicans love to talk about.

I have to make a little bit of a confession here. For several days on Twitter, I was seeing the repeated #ReleaseTheMemo. Fox News was talking about some kind of Devin Nunes memo. Trump, Jr. was tweeting about it incessantly, and all their little followers were tweeting out the #ReleaseTheMemo. I, honest to God, up until about 36 hours ago, had no idea what any of that was about. Why? Because I’m not a crazy person that watches conspiracy theory news outlets.

But anyway, I decided to look into it a little bit, and I found out what the memo actually is. It turns out it is a four-page memo written by Devin Nunes, the Chairman of the House Intelligence Committee, based on information that he received from the FBI. Now, on Sunday evening, after, basically, a week or more of Devin Nunes taunting this memo in front of people, saying, “I’ve got a memo that basically proves,” according to Nunes, and Fox News, and other Republicans, “it proves that the Obama administration broke the law in illegally-issued surveillance against Donald Trump and members of his campaign. We have the evidence right here in this memo that I wrote myself.”

So, Sunday, the FBI says, “That’s awesome. Can we see it, because we probably need to take action on this?” To which, Devin Nunes said, “No. No, you can’t see my special memo. My special memo can only be seen by Republicans, and not even all Republicans, just some Republicans that I want to see this memo. And I’m not going to release it to the public because it’s my special, personal memo.” The only other Democrat that we know so far who’s actually seen it is Representative Adam Schiff because he happens to be the ranking minority member on the House Intelligence Committee. According to Representative Schiff, “What’s in the memo is nothing but Republican talking points meant to trash the FBI and undermine the special prosecutor’s investigation into possible collusion between Donald Trump’s campaign and administration and Russia.”

What’s funny about this is that, again, the FBI says, “Awesome. You’ve got evidence that shows somebody committed a crime. We’re the agency that does that. We’re now run by Donald Trump’s own people. Can we have it? Can we see it?” And Nunes still says no. Republicans on Fox News, and in the comments on Twitter, they’re begging you to release the memo, but you won’t do it. Why? Well, I think any person with half a brain understands that the reason you’re not releasing it is because it’s a nothingburger.

If you, honest to God, had information that implicated Barack Obama or Hillary Clinton and all these other people that you’re alleging were involved, that any of them committed a crime, this thing would have been leaked to the public, would have been turned over to the Department of Justice long before you even had a chance to draft a memo, because that’s how you morons operate. There is nothing in that memo that is going to lead to any kind of arrest, or investigation, or any other kind of potential jail time or anything like that regarding anyone in the Obama administration, because if there was, you would have released it already.

You are trying to bait your little Republican idiotic followers along to the point where they believe something happened and, therefore, you undermine the FBI by saying they were involved in it as well, even though they’re begging you to hand it over to them and you refuse to, all so that you can undermine the intelligence agencies involved with investigating Donald Trump. That is what this is all about. This has nothing to do with a potential crime committed by the Obama administration. And, for the record, that alleged crime in the memo is that they accidentally issued surveillance against the wrong person in the Trump campaign, and so they ended up having to switch it to the other guy.

That’s the crime, even though, technically, based on the way the laws are in the United States, if Obama orders, or the White House, Department of Justice, whoever, orders a wiretap on somebody, they get wiretapped. If it’s the wrong person, oh well. Still, legal for them to do that, so again, no crime committed. But, again, they’re doing this because they want to undermine the current investigation into the Trump campaign so that when charges come out against high ranking people within the Trump campaign, or members of the Trump family, they can say that, “Well, this is all trumped up because we can’t trust the FBI anyway, because remember, my super-secret, special memo that still nobody else but me is allowed to see.” Sounds smart, right?