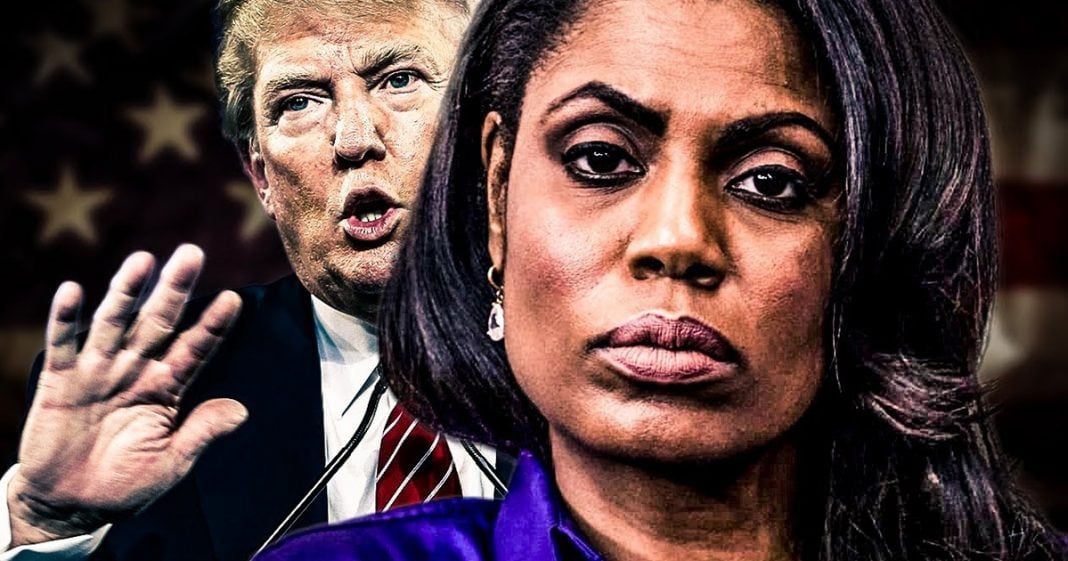 According to a new report in The New York Daily News, sources close to Omarosa Manigault Newman say that the former White House staffer likely recorded many conversations that she was privy to during her time at the White House and that the former reality TV star is lawyering up because she expects to get swept up in the Mueller investigation. Ring of Fire’s Farron Cousins explains what this could mean for the investigation, and why we should probably be a little skeptical of the Daily News’ report.

In recent days, I’ve come across a lot of stories that as soon as you read the headline, you’re like, “Oh my God. Trump is absolutely done.” But then you read the heart of the article and you start to realize, “What? That’s not even close to what your headline would suggest.” Such is a recent story about Omarose Manigault-Newman. According to the New York Daily News, Omarose Manigault-Newman may have secretly recorded conversations that occurred in the White House during her tenure with Donald Trump. The problem I have with this story is that the others who reported on it in their headlines and their click bait titles made it sound like she absolutely did this and Mueller wants these tapes. We’re going to make it happen. Blah. Blah. Blah. Well, Mueller would want the tapes. We do know that. So that parts accurate. But we do not know for certain at this point whether or not Omarose actually did record these conversations. It’s this kind of shotty headline work and I know there’s the battle for clicks out there on the internet, but it’s that kick of shotty headline that makes people start to distrust the media.

So anyway, having said that, having said my piece about how angry I got after I read the headline then read the story. Let me tell you the story. According to the New York Daily News, Omarose may have recorded some conversations during her time at the White House. That is actually coming from sources close to Omarose including her close friends. They said that she has a penchant for recording conversations. She does it all the time. She does it to kind of cover her own ass or to catch people in a lie that she can use against them later. Either way they said this is her personality. So it’s likely that she did this within the White House. Fair enough. However, we do know that the White House on several different occasion has told staffer they’re not allowed to have their personal cell phones on them in the office. It happened recently and it happened previously over the summer. They made their White House staffers turn in their phones. They told them to turn off their phones. So was Omarose exempted from that or was she a higher level and didn’t have to comply with it or did she just chose to break the rules and bring her phone in anyway, and then possibly maybe record a conversation based on this shotty reporting.

We don’t know. But again, as I pointed out, if she did record these conversations, this is absolutely something that Robert Mueller would want to know about. She is lawyering up according to sources close to her in this article because she fully expects to get roped into this investigation in the very near future, and if she is wanting to turn on Trump, which she had already suggested after she got fired and escorted off the White House property by the Secret Service that she would tell all in an upcoming book or whatever. She kind of got upstaged a little bit by Michael Wolff’s Fire and Fiery, but she still thinks she’s going to go public and tell everybody what happened because Omarose really, desperately wants to be famous and relevant, and that was something that was obvious from her first stint on The Apprentice many years ago.

But if she has information that could help Mueller and his investigation, we’ll welcome that. As for everything else about this story, it is kind of hard to believe. At this point, I’m getting tired of the sources say, the sources this and this and this, without any real evidence. What’s even worse is when the headlines try to convince you that she absolutely did a thing even though it’s only speculation at this point. I’m hoping she recorded conversations. I don’t think she would’ve recorded anything that had anything to do with collusion. I doubt that’s something they talked about in the White House. But as far as financial crimes, potential money laundering, those kinds of things. Violation of campaign finance laws, things that Mueller is already starting to look into, those could be relevant, and those could help down the Trump administration. But in the case of these tapes, I’ll wait and believe that they’re real once we hear them.