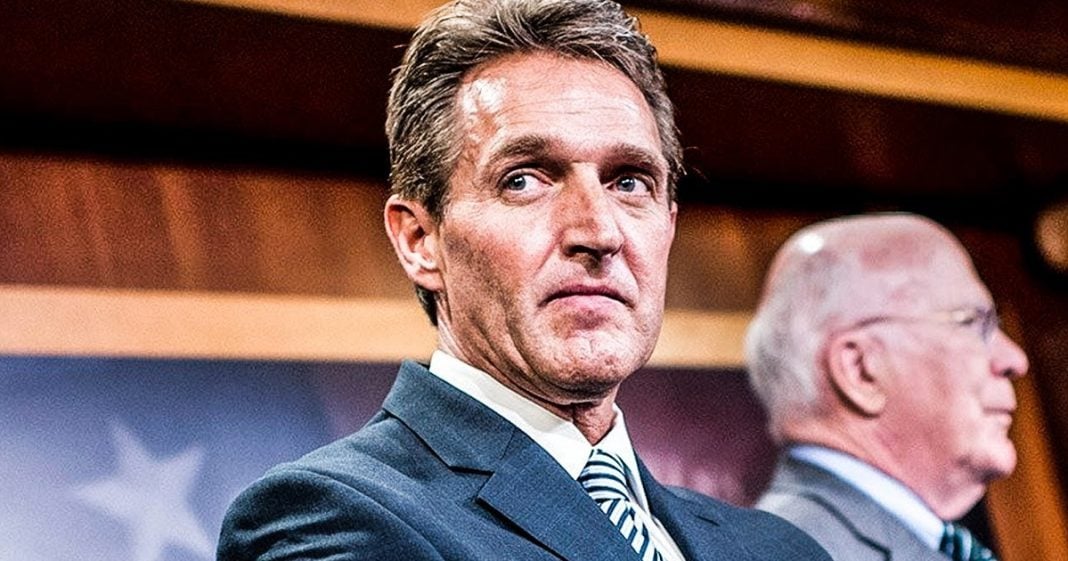 According to Republican Senator Jeff Flake, Donald Trump is using the same kind of rhetoric and tactics as Joseph Stalin. And when you compare the language used by the two it becomes incredibly clear that Flake is right. But Trump makes no apologies for his attitude and behavior, similar again to Stalin and other brutal dictators. Ring of Fire’s Farron Cousins discusses this.

Republican senator Jeff Flake from the state of Arizona this past week decided to take to the Senate floor where he gave a speech talking about the similarities behind the kind of rhetoric that Donald Trump is using the attack the media, and the same rhetoric that was used by former dictator Joesph Stalin. Stalin was always a guy who talked about the enemy of the people. That was how he remained in power. He convinced the majority of the public that other groups were their enemies, and if they wanted to defeat those enemies before those enemies defeated them, they had to follow Joseph Stalin.

With Donald Trump, according to Jeff Flake, and according to anyone who’s been paying attention, is doing the exact same thing, specifically, as Flake pointed out, with the media who Donald Trump has called the enemy of the American people, literally borrowing a phrase from one of the most brutal dictators of the 20th century. That is what we have sitting in the White House today, a man who admires these people, who wants to emulate people like Joseph Stalin by taking their words and making them his own. That seems to be a bit of a problem, don’t you think? Don’t you think we should expect more from the president? Don’t you think the president probably should be quoting dictators? And don’t you think, more importantly, that the president shouldn’t be going directly against the First Amendment to the United States Constitution by constantly attacking the free press?

Most Republicans probably see no problem with this. In fact, according to polls, Republicans like it. Republicans don’t trust the media. The American public as a whole trusts the media more than the trust Donald Trump, but when you break it down by party, Republicans trust the media a lot less than they trust Donald Trump, and it’s because of his attacks on them. These attacks are baseless, they’re without merit, but they’re not stopping. Because any time the media comes out with a negative story about Donald Trump, he slaps them with the label of fake news. Because he has the bigger microphone, he has the bigger podium, his words are what wins. His words are what resonate more with the American public. He gets the last say, because the news media, they have to move on. They have to cater to their advertisers. They can’t dwell one thing the president said because other news is happening in the world, and he’s not the center of the universe. Donald Trump, on the other hand, as we’ve clearly seen, loves to just hammer those same points home every single day on this stupid, little Twitter feed and his idiotic Republican followers eat it up.

Jeff Flake is 100% right. Donald Trump is attempting to emulate these brutal dictators by labeling these non-enemy groups as actual enemies of the American public, but Jeff Flake is not saint either, and I’m not going to sit here and lavish praise on a guy who’s voted with Donald Trump pretty much all of the time this past year. Yeah, he’s still the most outspoken critic of him, but where does that sit with the legislation that he’s gone ahead and green lighted with the rest of the Republican party to help destroy parts of the country and increase the gap between the haves and the have nots? Jeff Flake gets credit for correctly pointed something out about Donald Trump, but I’m not going to give him any credit beyond that. He’s still fighting against the best interest of the American public, because at heart, he is a Republican. He’s just a guy who happens to be Republican who also occasionally gets something right about how horrible Donald Trump truly is.