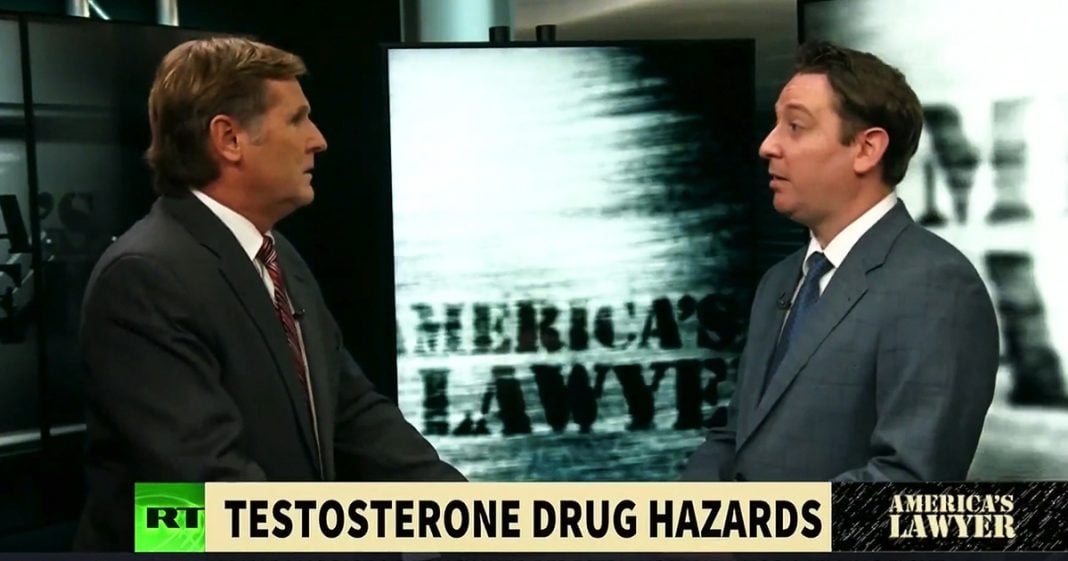 Via America’s Lawyer: Mike Papantonio and Attorney Brandon Bogle talk about how AbbVie, the maker of the testosterone treatment AndroGel, has been hit with almost $300 million in recent jury verdicts for deceptive marketing practices.

Mike Papantonio: Every time that drug companies release a new drug, they pray that it reaches what the industry calls “blockbuster” status. This typically means that the drug will bring in more than a billion dollars a year in total sales. Sometimes this status comes relatively easy, like when a new diabetes medication or arthritis drug comes out. Diseases like those have millions of potential customers, so it’s pretty easy for drug companies to sell a few billion dollars worth of their medications after a year or two. But other drugs and treatments have smaller markets, so drug companies have to resort to deceptive marketing practices in order to help their products hit that “blockbuster drug” status. And that’s exactly what happened with testosterone treatments in the United States.

AndroGel is approved to treat a specific condition called hypogonadism, but the population suffering from that condition was small, and the company knew that they would never hit “blockbuster” status if they only sold their product to men who had that condition. So AbbVie decided to promote their treatment to a much broader population of men by running TV and print ads telling men that they needed to have their testosterone levels checked by a doctors, and they needed to be high. They told men that if they were feeling tired, stressed, or generally less active or lethargic than they felt when they were younger, that it was because their bodies were not producing enough testosterone. They turned all of the natural things that happen to our bodies as we age into symptoms of a new disease that they called “Low T” disease.

As a result of that marketing, AndroGel sales soared, and about 5 million people in the last year alone were buying into the low testosterone hype. The testosterone drug passed the blockbuster mark in 2012 and 2013 before falling more recently after the lawsuits emerged and the FDA placed new safety warnings on the med.

AndroGel profited $675 million last year. Studies and clinical trials have linked Androgel and other testosterone treatments to heart attacks, blood clot injuries, stroke and an increased risk for prostate cancer, among other health reactions. But those negative side effects didn’t matter to the drug companies that were pushing these treatments. The only thing they cared about was whether or not their new product was going to pull in billions of dollars for their companies, and that’s exactly what happened.

Joining me now to talk about this case is Brandon Bogle. Brandon, you were involved in the first case, what? $150 million?

Mike Papantonio: Both of those cases, you were one of the trial lawyers involved in that case, which leads me to the question, those are startling kinds of numbers. The jury had to be furious about it. Tell us about the cases. How did the jury get to those numbers? What were they the most angry about?

Brandon Bogle: I think the most compelling facts of the case were these were both middle-aged men who had a condition that the drug company created, called “Low T.” They did not have hypergonadism, which is what these drugs, Androgel and other testosterone therapies, were approved to treat. Importantly, when you have Low T, you’re in a group of people that the drug companies just, quite frankly, never studied. They never knew whether the drug was safe or effective in this population of men. It turns out, it was neither safe nor effective.

Mike Papantonio: Interestingly enough, they knew they couldn’t sell enough of this drug to the normal population. This wasn’t even a necessary drug. This is a drug that nobody needed, except maybe a tiny, tiny part of the population. They can’t sell enough, so they invent this disease called “Low T” and then they go tell doctors, ‘Gee whiz, you need to start prescribing this if people have Low T.’ Was this company aware of just dangerous this product was?

Brandon Bogle: There were very aware. They very aware of two things, very aware, number one, that the drug was never approved to treat Low T or the symptoms of aging, which is basically what it is. As you get old, your testosterone naturally declines. When you put on a few pounds, your testosterone naturally declines. This drug was never approved to treat those sorts of issues. Importantly as well, they also knew their drug posed serious risks of heart attack, stroke and blood clots, and they did nothing to warn the public or to study those risks.

Mike Papantonio: Many people have died because of this, and you’re handling a good many of the cases throughout the country. Has anybody gone to jail for this? This is not just fraud, this is, really, if you analyze it, it’s almost an extension of a manslaughter analysis. You know what the problem is, the documents, was it clear to them? Did the documents show how clear this was.

Mike Papantonio: Any lawyer that’s there with Department of Justice is looking at the same facts that a jury came back with two times and punished this company by taking their money away, is that right?

Mike Papantonio: If you were to say, in trying this case, I know there are always documents that stick out and you say, ‘Wow, I can’t believe they wrote that.’ What do you think is the most important documents in this case? Why is the jury getting so angry about their conduct?

Brandon Bogle: The most important documents are those, a series of them, that show the internal scientists at the company raising concerns about the risks of heart attack and stroke and blood clots with this drug, and the decisions made internally within the company to do nothing about that knowledge.

Mike Papantonio: In writing, you have scientists saying, A, we know that this can kill people. Basically, that’s the conclusion.

Mike Papantonio: They’re out there telling doctors that, ‘Gee, you have a patient that is lethargic, they’re stressed, they don’t have their energy level, they maybe have ED, they’ve got all these issues,’ and they’re saying, ‘We’ve got the magic bullet. Here it is, testosterone.’ What is the truth of about that, to begin with? That’s a lie in and of itself, isn’t it?

Brandon Bogle: It is an absolute lie. It’s absolutely false. These are all just natural occurrences of aging. Your testosterone naturally declining with age is actually a good thing. It protects you from injury. It’s not a bad thing. Yes, they flat out went out and told doctors they should be prescribing a drug that the company knew these men did not need.

Mike Papantonio: When we talk about people dying, explain some of the ways that people died.

Brandon Bogle: There are situations where people have had massive heart attacks that caused death, have very severe strokes which cause death, and even instances where you have a pulmonary embolism, a blood clot that goes to your lungs that causes death frequently. We’ve seen cases all along those lines, where men are dying, unfortunately, from a drug they never needed.

Mike Papantonio: Again, it comes as the age-old story, FDA is useless. FDA is a dysfunctional, almost useless department. You can almost do away with the FDA and when we’d have the same rules and regulations, we’d have the same problems out there, anyway, wouldn’t we? What is your take on what the FDA did here?

Mike Papantonio: The drug is out there 15 years, people are reporting that men are dying from this drug, heart attacks, strokes, you name it, people are dying. The documents are in the file of the company that say, ‘Yeah, we know people are going to die,’ and management is covering that up, because they’re making billions of dollars. At the end of all this, when you presented this to the jury, what was your message? I can’t imagine that the jury is sitting there not wanting to get up and strangle the people on the other side. What was your thought?

Brandon Bogle: Our message was very clear. Our message was, nobody can change this but you. The FDA has not acted to change it. You know the company is not going to change it. It’s incumbent on you to tell them what they did is wrong and to send a message to make them change their behavior.

Mike Papantonio: Brandon, I always talk about this, I’m always interested in what corporate media does with a story like this. I do recall this story coming, emerging, years ago, the first edge of the story emerging years ago. In your take, how did corporate media do telling this story?

Mike Papantonio: You’ve got these advertisers, AbbVie, obviously advertising the heck out of this product. This is a gel that men rub on their body and there’s no real delivery system other than the gel. It’s not like it’s controlled delivery. It can all move into the system at one time. Sometimes they use the same spot to put the gel on, it collects. Isn’t this, anybody with a brain can look at this and say this a time bomb, right?

Brandon Bogle: Yeah, it was pretty apparent that this was going to be a problem. Again, the company knew that. That was not hidden to the company.

Brandon Bogle: We’re going back in January for another round at them so, I’m looking forward to that opportunity.

Mike Papantonio: I’m proud you’re my partner, by the way, I’ve got to disclose that.