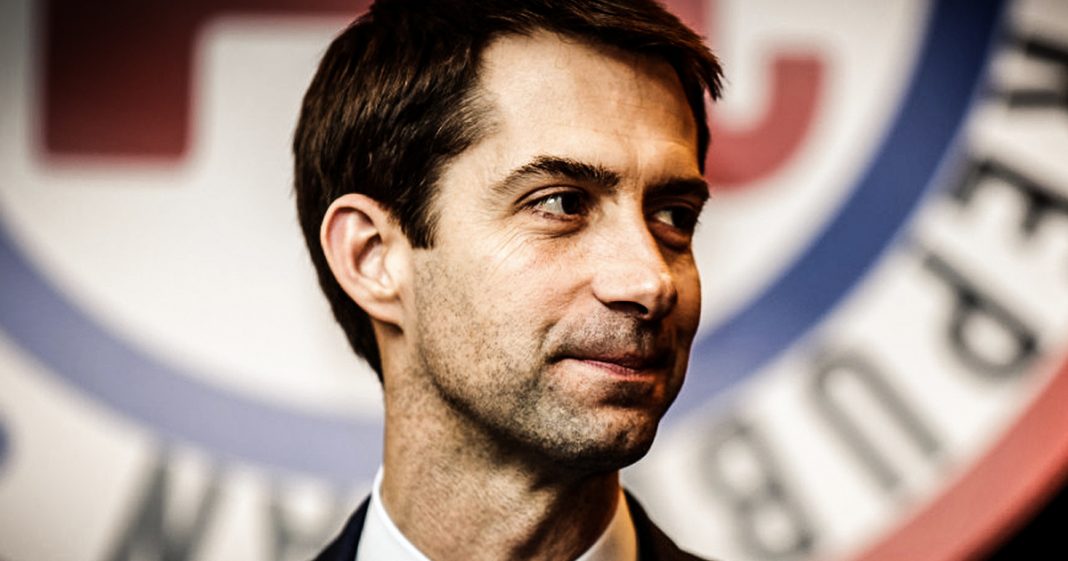 Republican Senator Tom Cotton has had enough of his constituents wanting answers about his horrible record and his indefensible defense of Donald Trump, so his office in Arkansas has decided to send out cease and desist letters to constituents that are asking too many questions. We’ve seen Republicans run and hide from voters a lot in the past year, but Cotton is the first to threaten legal action against people demanding accountability. Ring of Fire’s Farron Cousins explains why Tom Cotton is clearly unfit to serve as a US Senator.

Republican senator Tom Cotton believes that it’s a little unfair that his constituents are asking him questions. Recently, it was revealed by the Arkansas Times that activists in the state of Arkansas, who have been calling and showing up at Tom Cotton’s state office asking questions about policy, about his constant indefensible defense of Donald Trump. They’re just asking why. They want answers.

So, the response from Tom Cotton’s office was to send cease and desist letters to these people asking legitimate questions, so that they legally could not come to the office. They couldn’t call. They couldn’t fax. They couldn’t email. Tom Cotton, a guy who believes he’s about to be the next head of the CIA, the same guy who committed borderline treason by writing a letter to Iranian officials telling them to reject the Iran agreement that Barack Obama put into place. This guy is so cowardly that he won’t even take phone calls at his office, that he doesn’t even have to talk to, from his own constituents.

Now in the last year, specifically during the entire repeal Obamacare thing, when Republicans thought it would be a good idea to hold these town halls with which they got just bombarded by angry people, we’ve seen Republicans run and hide. They don’t want to face their voters. They don’t want to face the people back home, because they know that their positions, and their defense of Donald Trump is indefensible.

They understand that their policies are hugely unpopular, and that includes the recently passed tax cut package. People don’t want it, because they understand they get nothing out of it, and that the entire thing was a massive giveaway for corporations, just like the repeal of Obamacare that they tried to shove through.

So now they’re running and hiding, and this action by Tom Cotton to send cease and desist letters to these people, saying that you legally can’t call my office anymore, that is by far the most cowardly move we have seen from any Republican senator since Donald Trump took office, and that includes standing on top of your office and taking pictures of all the people outside angry at you, as Darrell Issa from the House of Representatives did back in 2017.