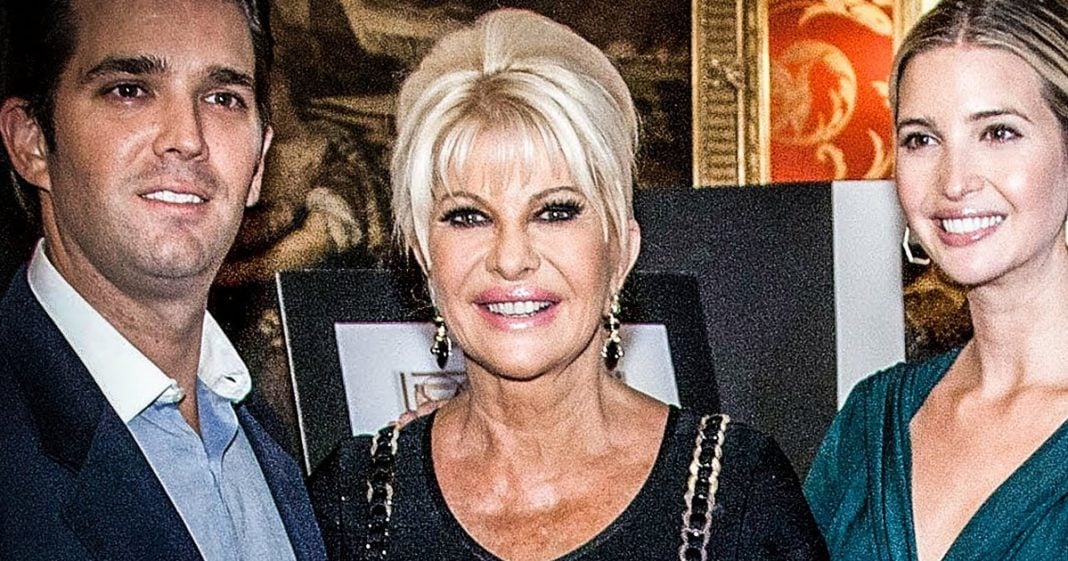 According to Donald Trump’s ex-wife, Ivana Trump, claimed in a recent interview on Good Morning Britain that Donald isn’t actually racist, he just gets confused a lot and says silly things. But that claim doesn’t make the President look any better in the eyes of the American public. Ring of Fire’s Farron Cousins explains why Ivana is clearly wrong on this issue and her defense of the President has actually made things worse.

Recently, Ivana Trump, the ex-wife of President Donald Trump, appeared on Good Morning Britain where they decided to ask her point-blank if her ex-husband is in fact a racist. To which, Ivana Trump said, “No, I do not believe he is a racist. He is definitely not a racist. There isn’t a racist bone in his body. Let’s move on.” But she actually did kind of continue on a little bit. She admits, or at least tells us, that he’s not a racist at all. He just gets confused. See, according to Ivana Trump, he’s got people in his left ear and people in his right ear constantly telling him and pushing him one way or the other. Poor little Donald just gets so confused by that, that he ends up saying stupidly, potentially racist things. That’s what it is, Ladies and Gentlemen. According to Ivana, it’s not that he’s racist. It’s that he’s so dumb that he says racist things, which also happens to statistically be a characteristic of racist people. They tend to be a little bit lower on that IQ scale and the education level scale.

But regardless, even if Ivan Trump was right about this, which she 100% is not. The dude’s totally racist. But even if she was right, if he’s not racist, he just gets so easily confused that he says racist things. Shouldn’t that be almost worse than just flat out being a racist? If you’re so dumb that you can be manipulated into saying horrible things like, “People from black countries are living in shitholes while we want more people from white countries like Norway.” If you’re so dumb that people pulling you either way convinced you to say something like that, then you don’t deserve to hold the office of the presidency, and I think it’s beyond time we invoke the 25th Amendment.

At this point, based on what Ivanka said, based on what the White House has said, and based on what mental health experts have said, Donald Trump is one of three things. He is racist. He is losing his mind. Or, he’s stupid. Those are really the only three options as to what is plaguing Donald Trump at this point. And to be honest, I think any one of those three is grounds for removal from office under the 25th Amendment. But let’s be perfectly honest. Donald Trump is not suffering from one of those three things. Donald Trump is suffering from all three of those things. If you take all of the analyses that have come out about Donald Trump, the things he says that have been proven to be overwhelmingly racist, the things he has said that have been proven to be overwhelmingly stupid, and the off-handed diagnoses of more than two dozen mental health experts saying that this man is suffering from some kind of disorder … I think when you add all three of those up, that creates the perfect storm for using the 25th Amendment to getting this man out of office.