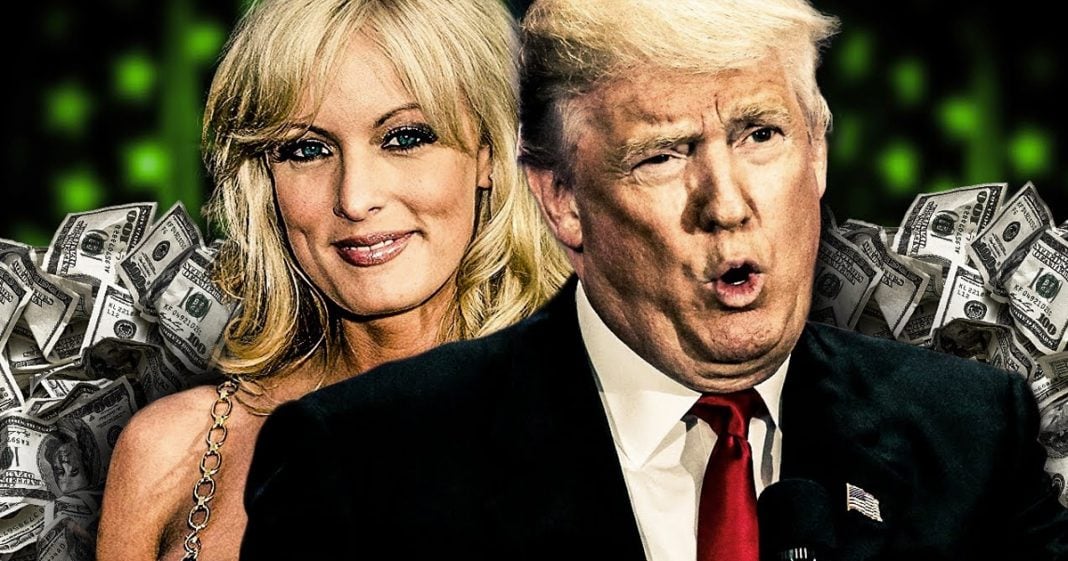 The story of Donald Trump and adult film star Stormy Daniels just keeps getting weirder, and according to legal experts, it looks like the whole story could now be viewed as a criminal one. The latest reports confirm that Trump’s lawyer, Michael Cohen, set up a shell company to pay off Stormy Daniels, a move that could easily be a violation of campaign finance laws as it directly benefited the Trump Campaign. Ring of Fire’s Farron Cousins explains this.

The story of Donald Trump and porn star Stormy Daniels continues to get even weirder. And the latest turn that this story has taken could indicate that Donald Trump and his lawyer Michael Cohen committed a felony by paying off Stormy Daniels $130,000 to keep her mouth shut about her affair that she had with Donald Trump. Here is what we know so far, these are the latest developments that have happened within the last 24-hours. It has now been revealed that Michael Cohen, Donald Trump’s lawyer and Executive Vice President of the Trump organization, set up a shell company in Delaware. The shell company was called Essential Consultants, LLC. He set this up just a few days before that company made the payment to Stormy Daniels, AKA Stephanie Cliffords, AKA, Peggy Peterson as she was listed in the payment from that organization when they paid the money from Essential Consultants to Stephanie Cliffords lawyers. They listed the payment as going to Peggy Peterson, so as if to hide and mask the names of who was actually involved.

Why is this illegal? Because it was a very clear violation of campaign finance laws. Now that may seem a little tricky, but this is what legal experts are telling us today. By making this payment to a woman in order to keep her quiet to benefit the campaign, that $130,000 becomes a sort of in kind political donation to the Trump campaign. They did not directly receive the money, but they received the benefit of that money, which counts as a campaign contribution. And because that number was way to high and it was not reported on their filings, and it was far above the $2,700 that is the limit for what they could give to the campaign, it is a clear violation of campaign finance laws. The last piece of the puzzle that we need to be able to prove that a crime was committed, was we have to find out specifically where that money came from and did Donald Trump personally direct that money for his lawyer to pay through the company, to the woman’s lawyer, back to the woman?

If we can confirm that, then it would be confirmed that yes, Donald Trump very clearly, very explicitly, and very intentionally violated campaign finance laws and therefore committed a felony. Now at this point, this story is less than a week old. I am certain that Robert Mueller, the Special Prosecutor probably hasn’t any time to really think about it yet. But as we’re finding out all these new little pieces to the story at this point on a near daily basis, it seems very likely that this is also going to get swept up into that special prosecutor investigation because again, Mueller was given the authority to go anywhere he needed to or wanted to with his investigation.

This doesn’t have to be about Russia or collusion, it could be about financial fraud, it could be about campaign finance violations. It could be about whatever Mueller finds and decides to go after it because it could be a viable crime committed by the Trump campaign, or the Trump administration, or anyone within the Trump family, and that’s what we’re looking at now. So again, I don’t think Mueller’s had time to look into this yet, but I guarantee you he’s starting to pay attention to it. And if it turns out that Donald Trump did violate campaign finance laws along with his lawyer Michael Cohen, I think that’s something Mueller’s going to be very interested in in the very near future.