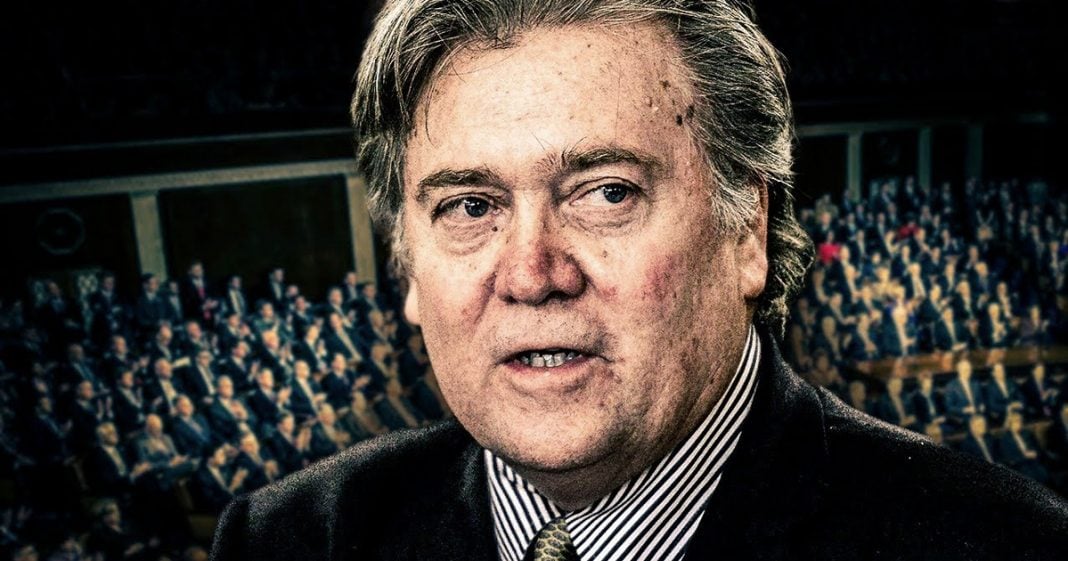 It has been revealed that Donald Trump personally told Steve Bannon to withhold vital information during his recent Congressional testimony, a move that legal experts say could easily be considered obstruction of justice. Bill Clinton was impeached for lying to Congress, and if Bannon did the same thing on Trump’s orders, both men could find themselves in serious legal trouble. Ring of Fire’s Farron Cousins discusses this.

Earlier this week, former Trump advisor, policy director, whatever you want to call him, Steve Bannon, had to appear before Congress to give his testimony about the ongoing investigation into the Trump campaign and the Trump administration. He spent hours behind closed doors talking to congressional interrogators, but it was after the testimony that the real news broke.

Here’s the thing. Bill Clinton got impeached for lying to Congress. It wasn’t the affair that got him, it was the lying about it to Congress. If we find out that Steve Bannon did in fact lie to Congress at the request of the president of the United States, that is an impeachable offense for Donald Trump and it is a potential prison sentence for Steve Bannon. Are either of these things going to happen? Possibly, but at this point, at this day, unlikely.

That could change. Steve Bannon was subpoenaed by Robert Mueller, the special prosecutor. He will have to go and testify under oath. When he testifies under oath, if he says the same false things or withholds any information, he could be found in contempt. He could also be tried for perjury. If he decides to give Mueller information that he withheld from Congress, and we can somehow prove that he lied to Congress based on what he tells Mueller, then we could also pretty much verify at that point that he do so at Trumps behest.

There’s no good outcome in this scenario for Donald Trump and Steve Bannon. Robert Mueller is closing in. The walls are getting tighter around Donald Trump, and every ethically questionable thing that Donald Trump is doing at this point is getting leaked to the press at an alarming rate for this administration. Nothing is secret anymore. He can’t hide anything. He can’t trust anyone. That’s actually a good thing for the American public.

We finally get a better glimpse of what’s actually happening right now in this White House, what Trump is doing, and how he is trying to undermine this investigation. Every new little piece that falls into place from this continues to point towards Donald Trump committing some kind of crime that could hopefully end his administration.