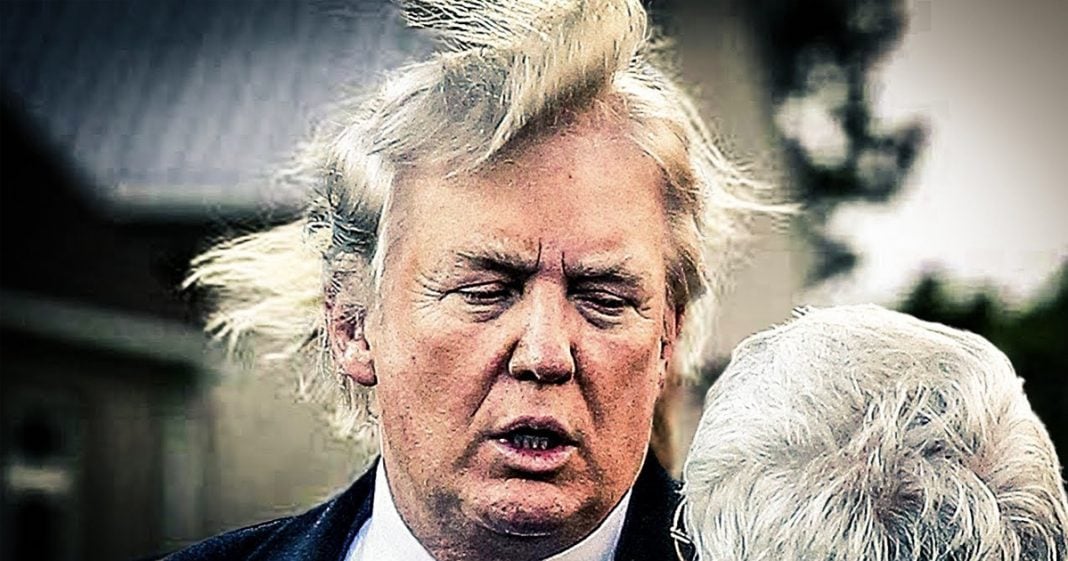 According to adult film actress Stormy Daniels, Donald Trump told her that he will never change his hairstyle, no matter how much people make fun of it, because if he cuts or changes it he will “lose his power and his wealth.” This is the same man who two weeks ago swore that he was a “stable genius,” and now we’re getting a closer look into his fragile mental state, as Ring of Fire’s Farron Cousins explains.

According to the full interview with adult film actress Stormy Daniels that was released by In Touch this morning, during her affair with Donald Trump, she repeatedly asked him why he won’t change his hair. He admitted that it’s something that people do mock him about, but if he were to change it, according to what he told Stormy Daniels, he would lose his power and his wealth, and that is why, according to Daniels according to Trump, he does not want to change his laughable hairstyle. He also went on to say that he’s had many offers for free makeovers and all these free wonderful treatments, but he refuses because he doesn’t want to lose his wealth and his power.

Now, there’s several things at issue with this particular story. First and foremost, was Daniels being honest when she told this to In Touch Weekly? We don’t necessarily have a reason to take it at face value or a reason to doubt her, so that remains in question. Second of all, if Trump did say this, was he joking about it? After all, Donald Trump occasionally does try to say something funny, but self-deprecation is typically not his style, so I seriously doubt that he was joking around, basically comparing himself to Samson losing his power by cutting his hair. Third, assuming every piece of this story is true, that Trump did say this, and that he was serious, and that Daniels did relay this information accurately to In Touch, then we once again have to bring it back to Donald Trump’s mental state.

If this is honestly what Donald Trump believes, then this is not a stable human being. This is not the kind of guy that we should trust with the ultimate power here in the United States, and the unlimited sole authority to launch nuclear weapons anywhere that he pleases. A guy that believes that cutting his hair will cause him to lose his power and his wealth is not the kind of guy that we need sitting in the Oval Office right now, or really ever, but again, that only applies if all of the elements of this story are true. In recent days, it seems like the news that’s been coming out about Donald Trump and his entire administration seems to be getting a little bit crazier and crazier.

However, based on what we’ve seen from the last year, it is this bit of escalation stories that do turn out to be true that does raise even more concerns about Donald Trump’s mental fitness for office. After all, it was just one week ago that these allegations came out that Donald Trump did have the affair with the adult film actress, and now seven days later we already have confirmation that yes, in spite of all of the denials that did happen. He did have this affair.

All of the evidence showing that he did is overwhelming at this point, so given the fact that everything Trump has said has been untrue, and everything that the reporters have said has later turned out to be confirmed in this particular instance, I’m going to err on the side of caution and go with the side that’s been right so far and say that yes, Donald Trump probably did say that if he cuts his hair, he’s going to lose his wealth and his power, and I think that’s a gamble we should all be willing to take. So somebody, a decent barber out there, give Donald Trump a call and see if you can make that happen.