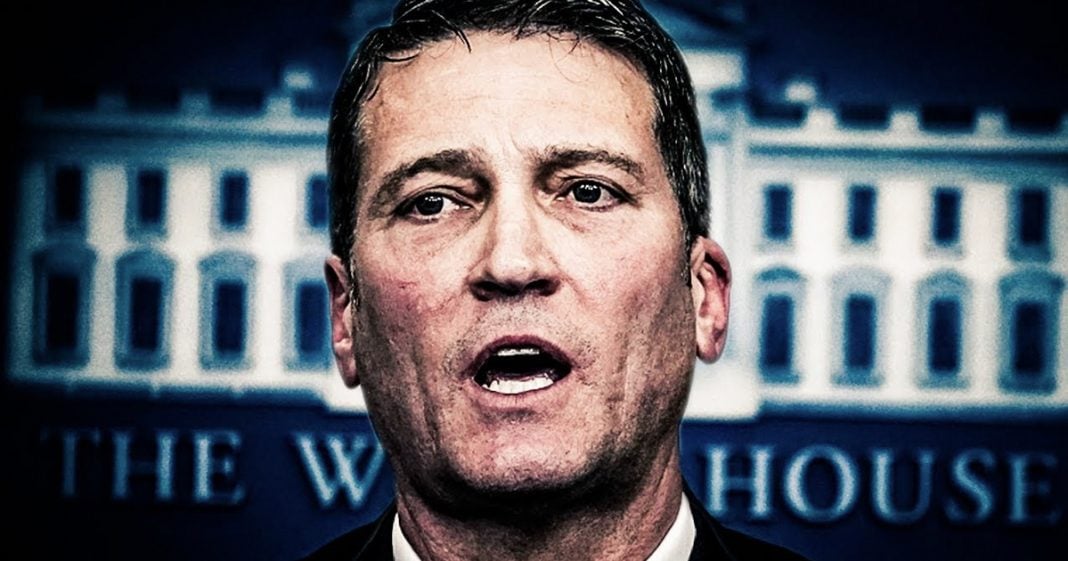 Earlier this week, the results of Donald Trump’s yearly physical were presented to the public during a press conference by the performing doctor, where he claimed that the president is in near perfect health, and with exercise and a proper diet he could even “live to be 200 years old.” A large part of the public didn’t buy these results, and chief among the doubters are independent cardiologists who have a better understanding of what the numbers presented to the public actually mean. Ring of Fire’s Farron Cousins explains what non-biased doctors are saying about the President’s health.

Earlier this week, Dr. Ronnie Jackson, the physician who performed Donald Trump’s physical last week got up in front of reporters at a press conference and talked about the fact that Donald Trump is in perfect health. He is great, and even according to the doctor during this press conference with the right diet and exercise, Donald Trump could possibly even live to be 200 years old. Now, he said that statement with a smile, but when you’re a medical professional talking about somebody’s future, you don’t tell them you could potentially live to be 200 years old unless you’re a complete quack.

I don’t typically make it a practice to undercut the opinion of respected physicians in the United States, but I will say, and I watched that press conference, that it was almost impossible to believe a single word that Dr. Ronnie Jackson said in that press conference. He continued to stumble over his words, he stuttered, he stammered, he stopped. He kept looking off to the side. Any body language expert in the world will tell you that those were the actions of a man who is not telling the truth. Every single move he made, every look off to the side, the “Uh, uh, uh, uh, uh, uh, uh, uh.” That’s not the way a person telling the truth typically behaves.

Now, you could argue that Jackson was doing this because he was nervous. Well, I’ve seen plenty of doctors get up and give speeches in front of thousands of people who’ve never done it before and do it without a hitch. Maybe Jackson’s different, but when we’re talking about a doctor who’s treated other Presidents of the United States before, I don’t think it’s the kind of guy who gets his nerves easily rattled, so I don’t buy the excuse that maybe he was just nervous. The reason I’m saying all of this about Jackson’s press conference is because after the press conference once he talked about Donald Trump’s numbers, like his LDL numbers, actual respectable physicians came out and disagreed with what Dr. Ronnie Jackson had to say about Donald Trump’s overall health. I’m not talking about the girth or conspiracy that he’s fatter than the doctor said, although, I mean, let’s face it.

What I’m talking about is the state of Donald Trump’s heart. And yes, it’s hard for some of us to believe the man actually does have a heart. According to actual cardiologists who listened to the numbers and understand what they mean, Donald Trump is in far worse shape than the doctor at that press conference let on. According to Donald Trump’s own medical records, he had a score of 133 on his calcium test within his heart, which is used to determined how calcified your arteries have become, which determines your risk of heart attack. In 2009, his number was 34. 2013, four years later, that number was 98. And now, five years later, four and a half years later it is 133. Doctors consider anything over 100 to be … put you at medium to high risk of suffering a heart attack within the next three years because your arteries are so calcified.

Dr. Sanjay Gupta at CNN says that this in indicative of a common form of heart disease that most men have. Cardiologists disagree and say that this is arteriosclerosis, and that his arteries are hardening, which makes it more likely that blood flow to the heart will stop. Two slightly different things, but either way, the general consensus is that Donald Trump is not in perfect health as we’ve been told and that there is a serious problem with his heart. His doctor even upped his cholesterol medication to help bring those numbers back down, and some doctors say that the dosage he put him on is indicative that the number is not in fact 133, but would be well over 200, which means that he is at imminent risk of having a heart attack at any moment. The bottom line is this, and I actually said this last week before Donald Trump even had his physical.

When they came out and gave us the results, they weren’t honest. They didn’t tell us what’s actually happening. That doctor tried to spend more time giving compliments to Donald Trump that had nothing to do with the medical diagnosis than he did telling us what was actually wrong with him, much like every other person that Donald Trump has ever surrounded himself with throughout his entire life. That doctor did exactly what most of us predicted he could do. That is why, unfortunately, I have to say that I do not believe what he has to say and I do believe the opinion of outside, independent, non biased cardiologists have to say about the state of Donald Trump’s deteriorating health.