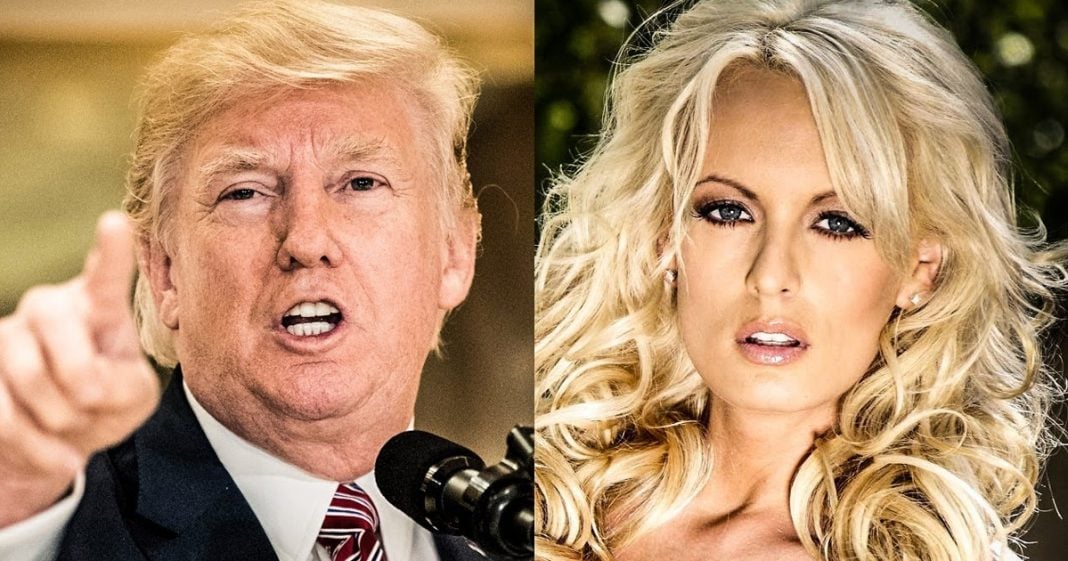 InTouch Weekly has been sitting on a bombshell story since 2011. At the time, they interviewed adult film star Stephanie Cliffords (Stormy Daniels) where she spilled the beans on her affair with Donald Trump. Why the magazine decided to shelve the story may not be clear, but what is becoming increasingly clear is that Trump has a serious problem controlling himself around women, as Ring of Fire’s Farron Cousins explains.

Now, she denied that she ever had an affair with Donald Trump as basically as per the agreement that she signed. And Trump’s lawyer also released a signed letter saying that no, this never happened. However, there is still a piece of evidence that somebody’s been sitting on since 2011 that could’ve cleared all of this up right away. And that someone is In Touch Weekly. And that piece of evidence was an interview that they did with Stormy Daniels, also known by her regular name Stephanie Clifford, back in 2011 where she told all of the details about her affair with Donald Trump.

In Touch Weekly has been sitting on this article for nearly seven years. And again, they could have cleared all of this up by simply posting it, publishing it, letting the public know that, yeah, this happened. We talked to her years ago before Donald Trump even considered running for President under the Republican banner. We could have come out with this at any point since then. We just decided to not do it.

According to the interview, with Stormy Daniels from 2011, she had an affair with Donald Trump in the year 2006 starting just four months after Milania gave birth to little Barron Trump. The affair started at Lake Tahoe where Daniels was invited out with Donald Trump, they spent a lot of time together. She also says, after that rendezvous she met up with him at another time where she went to his house and he was, quote, ‘obsessively watching Shark Week’, which actually might be the most normal thing we’ve ever heard about Donald Trump because who doesn’t like Shark Week.

But according to Daniels in this interview he also compared her, the pornographic actress, to his daughter, saying she’s smart, intelligent and beautiful, which is a very creepy comparison to make with a woman that you’re, allegedly, having sex with. To compare her to your daughter.

But, Daniels was adamant during this interview that took place in 2011, that this affair did happen. And the details in this interview that has now been released by In Touch Weekly, are actually corroborated with the story from Alana Evans, another pornographic actress, who came forward just days ago and said that Stormy Daniels called her from Lake Tahoe with Donald Trump begging her to come over. And Trump got on the phone and said, “Come hang out, let’s party.”

All of the pieces of this puzzle have been put together at this point and each one corroborates what the other one is saying. There’s very little doubt at this point, that yes, Donald Trump most likely had an affair with a pornographic actress. And as I’ve said before, that is not necessarily an impeachable offense, this happened before he was in office, he didn’t do anything illegal. But it does show what a scum bag he is because again, this began four months after his wife gave birth to their son. If anything, this creates more marital issues than electoral issues for Donald Trump. But, had In Touch Weekly not sat on this story for seven years, perhaps maybe this story could have come out during the campaign or during the primaries and prevented Donald Trump from ever becoming the Republican nominee. And therefore ever becoming President of the United States.

This was a massive fail by In Touch Weekly. And I hope if there’s any other news outlets in this country sitting on massive stories about Donald Trump for the last few years, you may as well go ahead and come forward with them now before somebody else ends up scooping you.