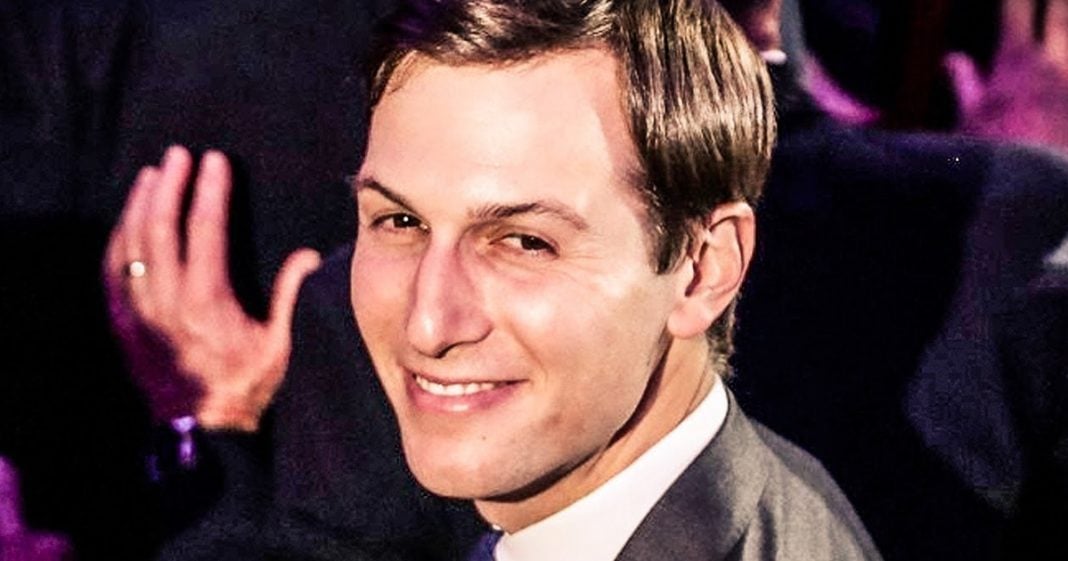 The Frisch School in New Jersey – the Jewish Orthodox high school attended by Trump’s son-in-law Jared Kushner – has asked students to write letters of thanks to Donald Trump for his decision to move the US embassy from Tel-Aviv to Jerusalem. This move has drawn the ire of parents and students alike, who describe the school’s actions as “sycophantic” towards the President. Ring of Fire’s Farron Cousins discusses this.

How would you feel if your high school aged child came home from school one day and said, “Guess what. Our principal made us write letters to the president of the United States telling him what a great job he is doing.” Well, that is the exact story that played out recently in New Jersey where The Frisch School, which is an Orthodox Jewish private school in New Jersey, also happens to be the high school that Jared Kushner, Donald Trump’s son-in-law, attended. Students from that school came home and said, “Our principal is asking us to write letters to Donald Trump telling him what a great decision it was to move the US embassy from Tel Aviv to Jerusalem. Parents were understandably pissed off about this because they believed, these are their words, that it was sycophantic of the school to have students write these letters to Donald Trump telling him what a great he’s doing.

Now, the principal of the school came out and said, “Look, these letters are entirely voluntary. They don’t have to do these at all.” Well, that same principal is the one who actually sent out a letter template to students in that school letting them know how to phrase things so that the president wouldn’t misunderstand and he would know that they were praising him. While it may have been voluntary, if you are sending out a template with suggested words and phrases to use, you’re pretty much telling kids this is what we want you to do.

This is a private school, not a public school so obviously there is a bit of leeway in something like that. However, these children, these are high school children, no matter how smart they are, they don’t fully comprehend everything that is going on with the Donald Trump presidency. They have no way of knowing whether or not this is a good idea, especially considering the fact that their principal told them that overwhelmingly the world supports this decision to move the embassy when in fact it has sparked massive riots and outrage over in the Middle East and more than 66% of people here in the United States think that it was a really stupid decision by the president and the fact that the UN also did not support it.

The president is lying, excuse me, principal is lying to his students. The parents are understandably and rightfully angry at the principal for even asking their children to do this and the kids are the one caught in the middle of all of this. They don’t fully comprehend the ramifications of moving the embassy from one spot to another. They don’t necessarily know or understand or have full comprehension of all of the turmoil happening in the Middle East. That’s not exactly something that they teach in high schools, even some of the best high schools in this country. That comes from extensive foreign policy research and foreign policy experts teaching you. These kids unfortunately do not have that and we cannot expect them to. The principal requesting these children write these letters is absolutely appalling.

Again, Jared Kushner went to this high school so there’s no doubt in my mind that Kushner’s connection to this school is why this principal had these children do these. They’re maybe wanting a little donation from the Kushner family. Maybe they want a little bit of special treatment. Maybe the principal is wanting an invite to the White House. We don’t really know at this point but we can pretty much surmise that the reason this principal decided to force these kids to write praising letters to Donald Trump is because he wanted something in exchange from the administration.