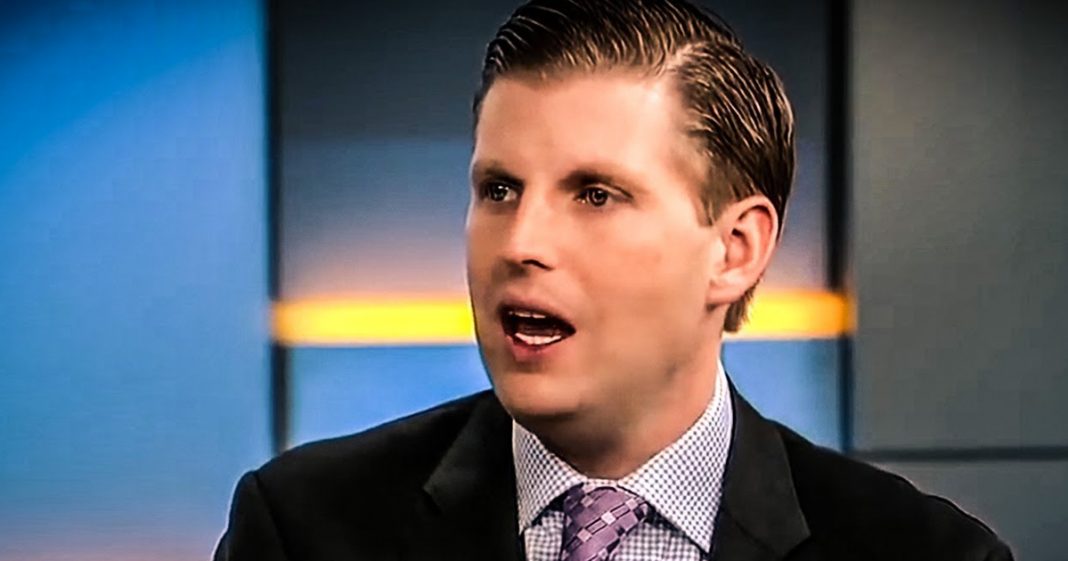 During an interview on Fox & Friends this week, Eric Trump attempted to defend his father against the growing allegations of racism against him by saying that his dad only cares about one color: GREEN. While Eric was attempted to make his father look better in the eyes of the public, he only succeeded in confirming that the only thing Trump cares about is money. Ring of Fire’s Farron Cousins discusses this.

Members of the Trump administration and the Trump family are still trying to convince the world that he is not a racist. The latest member of the Trump family to jump into the fray was Eric Trump, who on Wednesday appeared on Fox and Friends, a program that he knows his daddy’s going to be watching, where he said the following in an attempt to convince the public that his dad isn’t actually racist. Take a look.

Let’s talk about, too, the theme since last Thursday has been your dad, according to people in that meeting, said some things about race, and that people are calling him a racist for the last five or six days. I know you don’t agree with that, but is there anything you could bring to this conversation you think is important.

My father sees one color, green. That’s all he cares about, he cares about the economy. All right, he does not see race. He’s the least racist person I have ever met in my entire life. It’s total nonsense.

Right, Donald Trump doesn’t see black and white, he only sees green. Now, we’re assuming, at this point, obviously, that Eric Trump is talking about money. He’s telling us, Daddy only cares about money. But seeing green also has a separate meaning. Green means envy, and as we know, Donald Trump is a guy who gets easily jealous of others who might have more worth than him, more power than him, a better looking which than him, who knows.

I think Eric Trump actually hit it on the head. In his backwards defense of his father, trying to say that he doesn’t care if you’re white or black, he only cares if you have money, that’s almost as bad as being a racist. It’s basically economic racism. If you’ve got money, Donald Trump likes you. If you don’t, Donald Trump does not, and you can actually look at wealth statistics in the United States and see that oops, that’s mostly white people again.

Eric Trump, and it’s an ongoing competition between him and Donald, Junior. Right now they’re actually fighting to see who can be the dumber Trump son. I think this comment here may have put Eric Trump back in the lead just a little bit, because not only does it show that yes, his father certainly, obviously believes in economic racism, but also that his father doesn’t give a damn about the American public.

He doesn’t care if people get kicked off their health insurance, he doesn’t care if we slash Social Security, and Medicare, and Medicaid. He doesn’t care that our roads and bridges are falling apart, or that teachers are not getting raises for five or six years. All he cares about is how much money he has, because that’s what this is about.

It’s about what the presidency can do for Donald Trump. How far we’ve fallen as a country, from, “Ask not what your country can do for you, but for what you can do for your country,” to, how much can I make off of winning the office of the Presidency. That’s where we’re at with Donald Trump, and Eric Trump, in that interview with Fox and Friends, just confirmed it.