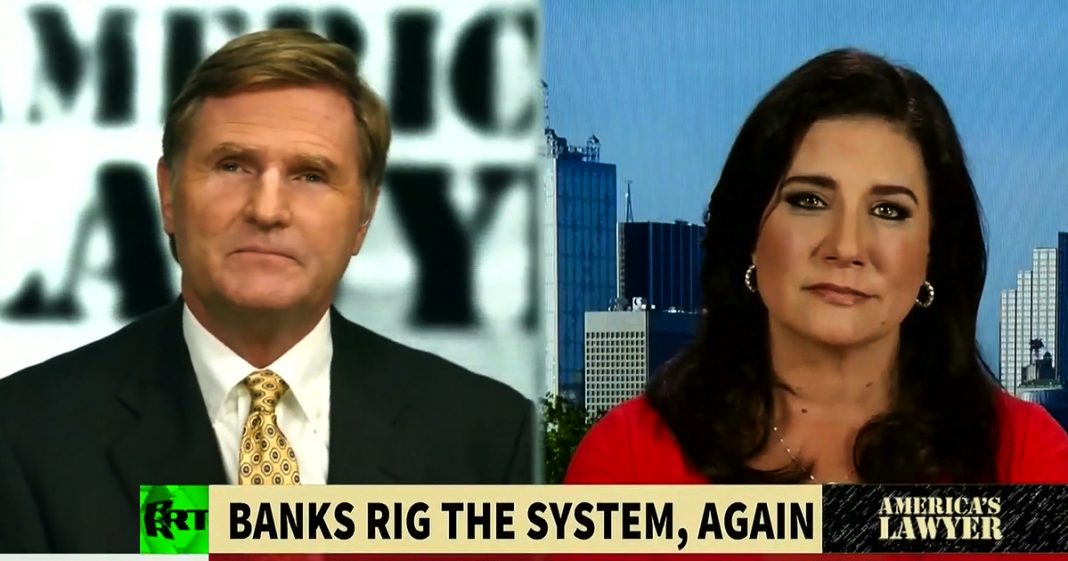 Via America’s Lawyer: Mike Papantonio talks with Danielle DiMartino Booth about how a new federal lawsuit says Goldman Sachs and other Wall Street banks rigged the U.S Treasury Bond Market to gain profits for themselves.

Mike Papantonio: A new federal lawsuit filed in Manhattan says Goldman Sachs and other Wall Street banks rigged the US Treasury bond market to gain profits for themselves. The banks allegedly pulled this off by secretly sharing clients’ informations in online chat room. Joining me to talk about this is Danielle DiMartino Booth, founder of Money Strong LLC and author of “Fed Up: An Insider’s Take on Why the Federal Reserve is Bad for America.” Danielle, first of all, it’s a repeat, isn’t it? The first time when the last burn down took place, we didn’t throw anybody in prison. You know, you had Eric Holder than wouldn’t throw them in prison. You had Obama that told us that everybody was going to go to prison when he was running, and then nothing happened, Loretta Lynch. Nobody thrown in prison. They committed the worst kinds of felonies, and here we go again. The average person hears this headline, and it’s no surprise, is it?

Danielle DiMartino Booth: You know, it really isn’t, and we can go back even further to when Salomon Brothers fell down and a certain individual by the name of Jay Powell was at the United States Treasury, because Salomon Brothers came down because of the Treasuring rigging on their part. That was when he installed Warren Buffett to run the company, and that ended up being the downfall of a major firm. If we could get this done in the early 1990s, why on Earth did we fail so miserably with no perp walks with the aftermath of the greatest financial crisis since the Great Depression? It really begs to reason.

Mike Papantonio: Well, you know, it’s getting to where it’s just such the norm, Danielle, we see them, these Wall Streeters, they commit the type of fraud that would have the average person on the street throw in prison for the rest of their lives. These are cats that get fined a billion dollars. It’s just the cost of doing business. Anytime you see a fine were they’re fined a billion dollars, understand they’ve made $50 billion. So, nobody actually learns. There’s no cultural change. This lawsuit is an extension of the Department of Justice’s probe that started in 2015. Since then, Goldman Sachs has become more the focus in this probe. Can people expect a fair conclusion to this investigation given the fact that former Goldman alumni sit on top of government positions, and they seem bullet proof? They just never go to prison no matter what they do. What’s your take?

Danielle DiMartino Booth: Well, I’ll give you this much. It’s very bad optics right now for there to be the person running the US Treasury to be theoretically in charge of spearheading this investigation when as chief operating office at the time that these alleged misdeeds took place, he was in charge of that very Treasury unit. I mean, the word “recusal” certainly comes to mind when you talk about this. But again, the optics could not be any worse, especially as you say, there are other broker-dealers that are involved. There are other primary dealers that are involved with this probe, but it does appear that Goldman Sachs is the focal point in this particular inquiry.

Mike Papantonio: Well, in your book you explore the idea, the connections, you know, why is it that somebody with the feds met … Why don’t they take action because they know life long friends, somebody they’ve worked with in the business, in the Wall Street business, for so long, it’s this country club mentality, isn’t it? Danielle, this country club mentality that you talk about in your book, that we really don’t ever really change anything, because it’s the golden rule: The person that has all of the gold makes all the rules. And that’s what’s going on with Wall Street again as they burn down this market again. This time in a different kind of way, but it’s still the same kind of criminality, isn’t it?

Danielle DiMartino Booth: You know, it is, and I’ll take you back to when Alan Greenspan first took office. People forget that August 11, 1987, was just a few months away from the Black Monday, October 19, 1987, crash, few realize that in the weeks and the months that followed this, Greenspan went so far as to sanction the New York Fed leaking information to bond trading desks ahead of Fed moves to inject liquidity into the system. In Street parlance, this is called front-running the Fed. It’s a big huge no-no but this culture was set in place over 30 years ago when Alan Greenspan first effectively sanctioned it by allowing the New York fed to partake in this behavior.

Fast forward to the aftermath of the financial crisis, the New York Fed had a very independent consultancy come in to try and figure out what had gone wrong at the New York Fed in terms of their ability to supervise the banks that they are mandated to regulate, like Goldman Sachs, and it was determined at the time in supervision and regulation at the Fed, that it was a big no-no to raise your hand and say something. One would have thought that after the determination of this inquiry concluded that this nefarious behavior would have come to a screeching halt, but clearly given the evidence and some of the people who have been subpoenaed and are willing to speak on behalf of this case, it didn’t end.

Mike Papantonio: No, and it doesn’t end, Danielle, as you’ve pointed out so many times in the things that you’ve written. I wish everybody could read your material, and they’d understand that nothing changes without a perp walk. Nothing changes. You know, these characters don’t look like they’re street thugs, but they are, they’re Wall Street thugs, and now they’re going to do this with the bond market. We’re going to see the same thing happen with the bond market that we saw with the housing market. This kind of insider information is nothing new, and what I’m wondering, what is your take on why Obama ran for president telling us that he was going to do something about it, he was going to change Wall Street, people were going to go to jail, and all of a sudden zero happened. We had, matter of fact, the person he puts in charge comes from Covington Burling, Eric Holder, actually worked for Wall Street criminals, and then they appoint him to be the AG. What is your take on what went wrong here?

Danielle DiMartino Booth: Look, it’s very simple, in the case of Barrack Obama, you can simply follow the money. Look, with Freddie and Fannie, not to go off on a tangent her, but Obama was the third largest recipient of funds from Freddie and Fannie. Wall Street did quite a lot to put Barrack Obama in office upon his reelection, and as you say, no perp walks were the result. My good friend Gillian Tett, who’s an editor over the Financial Times, wrote back in 2009 that there would be serious societal ramifications if no perp walks that gave the public a sense of closure like the Keating Five in the aftermath of the savings and loan crisis. She said that the public would become unglued, which it clearly has, if no perp walks follow what had gone on on Wall Street, and here we are over a decade later, still having this discussion.

Mike Papantonio: Isn’t it wild, now I got to close with this, but isn’t it wild, Ronald Reagan had 600 bankers arrested, most of them had to serve time over the S and L crisis, and he supposed to be this conservative, I’m-all-for-business-kind-of president, and then Obama, who makes all these promises, does nothing, and because of that, because of Obama’s inactivity, there’s no other way to put this, because of his inactivity and because of Eric Holder’s inactivity on this, their unwillingness to prosecute these Wall Streeters, now this whole thing is happening again with the bond market. And it’s just a tragedy. It just continues and continues. Danielle, keep writing, okay? Keep writing and talking about this topic.

Mike Papantonio: You’re a star out there, okay, thanks.