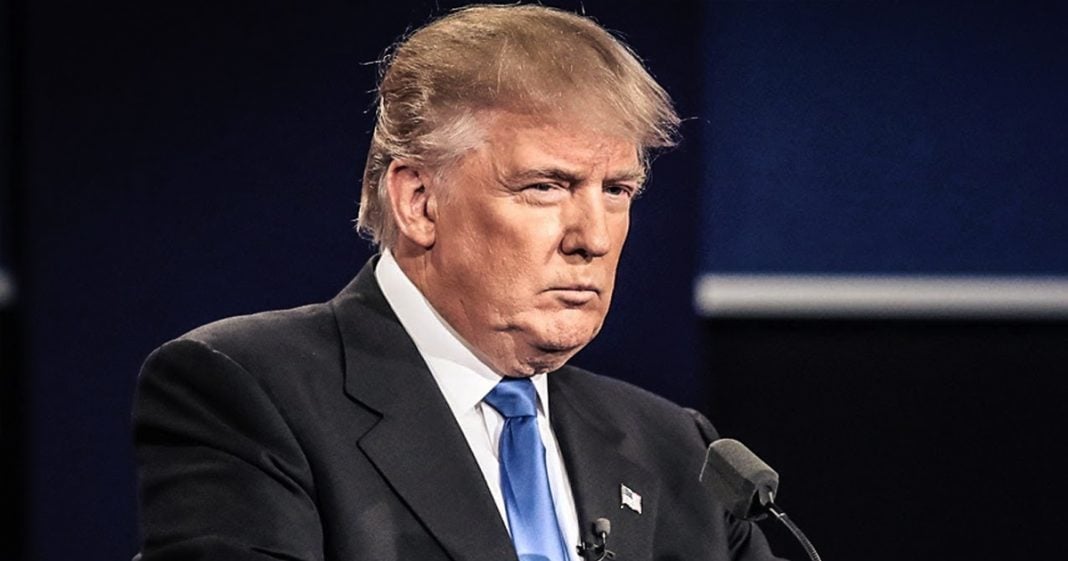 As of right now, Donald Trump still plans on spending Wednesday evening handing out awards to the most dishonest media outlets in the country, a move that not only has a chilling effect on free speech, but one that could also land members of his staff on the wrong side of an ethics investigation. Ring of Fire’s Farron Cousins explains why it is likely illegal for members of Trump’s staff to be a part of these “awards” in any way.

Wednesday evening is the day that we have all been waiting for, ’cause that will be the day that Donald Trump announces his Fake News Awards recipients, of course unless he decides to change the date once again, like he did last time. It was supposed to be last Monday, but at the last minute he realized that was the same day as the College Football National Championship game, so he had to push it back to Wednesday the 17th. Nonetheless, tomorrow night, the Fake News Awards as planned, could actually result in a ethical and legal headache for members of Donald Trump’s staff. According to new reports, if Trump’s staff, White House staffers, government paid employees, actually take any part of these Fake News Awards, then they find themselves in breach of ethics law and they could find themselves either censured, fired and potentially in prison and fined for their involvement in these awards. Here’s the way this works.

Government employees are not allowed to endorse any kind of product or company while working for the federal government unless it is something that is directly affected by the rules of the government. For example, they could go out and say, “Regulations are strangling AT&T.” That’s not true, don’t think that that’s true, but they could say something like that. However, if they come out and say that CNN is the fakest of the fake news, that is what is considered an anti-endorsement, thereby endorsing all competitors of that one brand or product, which is therefore illegal inside of the White House.

So again, if Trump’s staff played any role in creating these awards, handing them out or writing anything that’s going to go on that man’s teleprompter, they have violated ethics laws. Now, there is a catch to this, Trump himself is immune for some reason. These ethics laws do not apply to him. People who work directly for Donald Trump they do not apply to them and people who work for campaigns, these ethics laws do not apply to them. So, here’s what has to happen in order for these Fake News Awards to be on the level and not considered illegal. They pretty much have to be carried out by the Donald Trump or the Republican National Committee Campaign. If they are done by White House staffers, then we’re talking about illegality here and people could very easily find themselves on the wrong side of the law.

It’s very similar to what happened a few months ago when Kellyanne Conway went on the news and said, “Buy Ivanka’s stuff.” She was a federal government employee, and she endorsed a product or brand over other products and brands, and therefore violated ethics rules, of course nothing happened to her, nothing probably will happen to her, but if we had prosecutors up there in DC with any courage, something would have happened to her.

The other part of this story is the fact that what is this going to do to the First Amendment and to free speech here in the United States? These staffers and Donald Trump, they don’t have qualms with the media because they’re lying about Trump, they have qualms with the media because they’re being negative about Donald Trump. They say that it’s lies, however, it is not, so really they’re just pissed off that they’re being negative about Donald Trump, and so he’s decided to create these Fake News Awards as a way to, I guess, get even with them, when in reality all it’s going to do is continue to boost these networks ratings, as we saw with MSNBC at the beginning of 2017 after Trump got sworn in, their ratings went through the roof, because they were some of the first people to actively, openly criticize Donald Trump.

Everything he does seems to kind of work out in the opposite way. So, if he does carry through with these Fake News Awards, he’s going to be boosting the ratings of networks like CNN and MSNBC, or the readership of Washington Post and the New York Times, and he’s too stupid to even realize that.