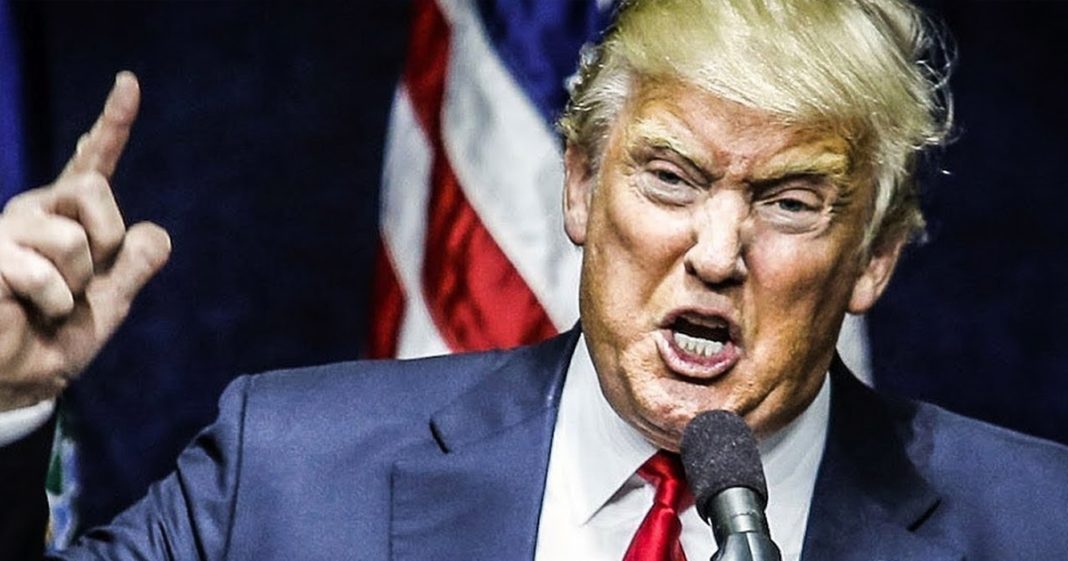 According to a new report by Axios, Republican lawmakers in DC are growing tired of Donald Trump’s nonstop rage-tweeting. But they aren’t mad that he’s showing the world his crazier side, instead they’re mad that he isn’t using his Twitter feed to promote tax cuts. As Ring of Fire’s Farron Cousins explains, Republicans still believe that Trump will suddenly “turn presidential” and the GOP will be waiting until the end of time for that to happen.

According to a new report from Axios, republicans in Washington, D.C., are absolutely furious about Donald Trump’s tweeting habits. They’re mad that the president is out there every day rage tweeting Fox and Friends but, they’re not mad because he’s saying stupid or crazy or insulting things, instead republicans are mad about Donald Trump’s tweets because they’re not being used to push support for the tax cut package that passed toward the end of the year.

That’s right, they don’t care that Donald Trump is out there saying ridiculous things that are driving his approval rating even lower, they’re mad that he’s not using every single tweet to tell us how great those tax cuts are. They don’t care that he says racist, misogynistic things on Twitter, they’re mad that he’s not telling Americans that they’re gonna get a massive pay increase as a result of these tax cuts.

Well, in Trump’s defense on this issue, which is a weird thing to even have to say, he actually does tweet out constantly about how great the economy is doing, and how great these tax cuts are gonna be for the economy and for the American worker. Of course, none of that is even close to being reality and one of the talking points republicans have been using recently about the fact that Walmart just gave its workers a raise is because of these tax cuts also falls short because on the same day they announced this, they quietly shut down dozens of Sam’s Club stores, sending more people to the unemployment lines and so, yeah, you gave everybody a raise but, you also just laid off hundreds upon hundreds of American people who no longer have a job.

Also, those bonuses they’ve been bragging about, a lot of them, especially Walmart, you have to be working at the company for more than twenty years and be classified as a full-time person, employee, to be able to access that bonus and if you don’t fit that, or even if you do fit it, but you got a few marks on your record, your bonus could be as low as two hundred dollars.

Make no mistake, and I’ve said this a hundred times, and I’m gonna have to say it a hundred times more, these tax cuts are not going to create jobs, these tax cuts are not going to get you a raise. In Walmart’s case, the only reason they raised wages was because their main competitor, Target, did that a while back and they were finding it hard to hire people because everybody wanted to go work at Target and not at Walmart because of the higher wages and benefits.

But anyway, these tax cuts will do nothing to increase your paycheck. Maybe at first, but again, those are temporary. For you and me and the majority of people in this country, our tax cuts are temporary. Those bonuses that just came out from these massive corporations, those were a one time thing. A kind of a show of good faith so American people could get hooked in and think that corporations were gonna do the right thing when in reality, those bonuses won’t exist next year and I guarantee you those workers who got those thousand dollar bonuses, most of it has probably already been spent on things like food and health care and paying off debts. It’s not gonna go allow these people to take massive vacations and to unplug and to get their heads out of work for a while. They’re using it to kind of keep themselves above water even if to small extent. So, while those bonuses were appreciated, what would be even more appreciated is if they’d happen on a regular basis in some of these billion dollar companies pulling in tens of billions of dollars in profit every single year.

So, republicans can be mad all they want that Donald Trump isn’t pushing this tax cut and trying to tell us that it’s the greatest thing that’s ever happened to us but, at the end of the day, the more they talk about how great it is, the angrier the American public becomes so they should be grateful that Donald Trump isn’t wasting his time talking about tax cuts and is, instead, rage tweeting Fox News because if he decides to start focusing on these tax cuts, and start spewing out more and more lies, fewer and fewer Americans are gonna start believing in the myth that trickle down might somehow actually help them.