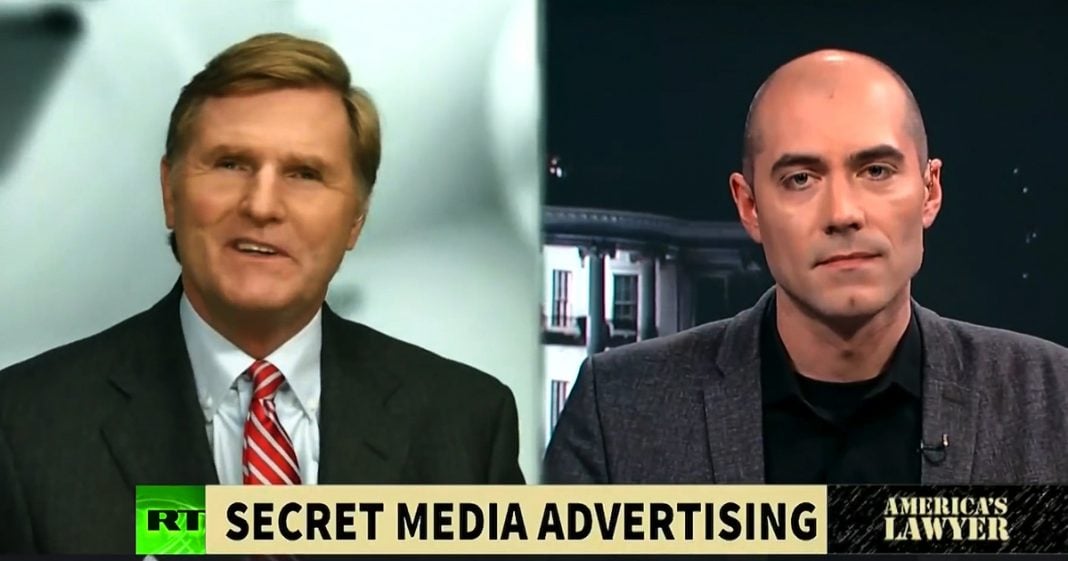 Via America’s Lawyer: Mike Papantonio talks with Tyrel Ventura about how some online journalists are taking payments from advertisers for positive coverage.

Mike Papantonio: The last news article you read might have been the result of paid advertising. That’s what a journalist from outline.com detailed in a bombshell report called, “Bribes for Blogs.” He provides emails and social media exchanges that illustrate the content that you might have read in Forbes magazine or Huffington Post, that were probably written for the sole purpose of selling you a product and they dress it up like it’s a news article.

Joining me now to talk about this is Tyrel Ventura, host of “Watching the Hawks,” clearly one of the best political shows on television. You’ve got to see “Watching the Hawks” if you haven’t seen it already. Tyrel’s with me now. Tyrel, in all the time you’ve been involved with media, have you ever seen anything as explicit as the allegations provided in this report, that this is all phonied up stuff?

Tyrel Ventura: Not in journalism, I haven’t seen this. I think the last time I saw this kind of like advertising was in like hip hop songs. You get the musicians will do this, where they’ll include Courvoisier or some brand name into their song and they’ll get paid at the back end for it, and you’re listening to the song and it’s kind of embedded advertising.

This is amazing what Outline has discovered, and a lot of it’s done through these blog services and other things, and it truly just blows my mind and it really, it really is a disservice to journalism, if you’re sliding in advertisements in these articles, or outright writing an entire article that’s basically one giant advertisement and then not telling your audience, hey I support this or this is an ad or I’m getting paid for this.

Mike Papantonio: Well I mean you think that it’s an article? Right? You look at it. You believe it’s an article and all of a sudden you find out that it’s phonied up from the pharmaceutical industry or the travel industry, something, where they’ve written the article. They’ve given it to the Huffington Post and they say we want you to write, we want this run exactly like we’ve written it and we want people to believe that they’re actually reading a real article rather than an advertisement, and then there’s no mention of advertising.

Whether it’s Forbes, like online talks about, or Huffington Post. This goes on a lot. The report asserts that the publication of Forbes of aware of actual payoffs in isolated incidents between brands and journalists. What are the grounds for that accusation, Tyrel? That’s a strong accusation.

Tyrel Ventura: It is a strong accusation. Where the Outline journalist who’s investigating this found this was in a case of Chris Chong who was an author, a blogger for Forbes, who was putting out stories about I want to say, he had about a dozen stories up on Forbes and when these kind of allegations arose, Forbes immediately took them down because most sites, your Forbes, your Huff Post, they have rules that say that they don’t allow their contributors to do this because a lot of times these sites will approach the contributor, not Forbes. They’ll go after someone writing on Forbes and say, hey, do you want to make an extra $150 or even more. Some, I saw some numbers, 1100, and say hey do you want to do this? Insert this into your article. Away you go.

What Outline kind of laid out in their reporting is that you really got the idea that most dotcoms and most publications kind of just looked the other way. Even though it’s against the rules, their rules that they have for journalist conduct there, they don’t really enforce them. They only kind of enforce them after the fact, after it’s made public. Somebody figures it out or another good journalist investigates the journalist and finds out, oh he’s getting paid on the side.

What you’re seeing is that a lot of people are using this for supplemental income. In the online news world, as you know as well as I do, there’s not a lot of money. That money window is getting smaller and smaller, especially for independent journalists, so the temptation to corrupt your reporting is there, and that’s what these PR companies and these big corporations jump on and take advantage of.

Mike Papantonio: Yeah, and Tyrel, this is not just as you pointed out, this is not just in blogosphere. There was a poll that said, I think 65% of people that were polled believe that corporate media is so full of fake news that they don’t know what’s real and not. The truth is the same thing now is shifting over to social media. In other words, we know we’ve seen this for so long with corporate media.

We know, well most people don’t know this but if you do this for a living, if you’re in the journalism business, if you’re in the lawyering business and you see a company like, well Xarelto, this product we just talked about earlier. You see the company’s coming forward with all these feel good commercials, and in there, you also note that some of those companies are also feeding stories that are fantasy stories that corporate media picks up on and it’s kind of a thank you for spending $10 million with us this year. Thank you, J & J. Thank you Pfizer, thank you Merck. Now we’re starting to see that. Your point being now we’re starting to see that bleed over into the social media realm. What’s your take?

Tyrel Ventura: Well you know, anybody who watches news, you know the corporate media has their agendas. You know that the corporate paymasters are going to say, “Look don’t report on this. Report on this.” It’s kind of the unspoken word but now when you’re seeing this kind of outright, here’s your story, take it. Normally, you’d see this in the old days in magazines and it’d be that section that looks like a story but then at the end it has like, and it has the big pharma pill at the end, saying, oh this is, and you can generally, you know, flip the pages and know you suddenly got, you can tell you’re looking at an advertisement.

But as you just pointed out Mike, that line is getting smaller and smaller. Sometimes it’s fine print way at the bottom. If you’re reading the New York Times or something like that, then suddenly, oh this op-ed is suddenly paid for. This isn’t actually someone, a reporter doing good work. This is a reporter basically working directly for an advertiser or a corporation that says go put out this article to basically pimp our product.

It’s really unscrupulous and it’s one of those things that really gets under my skin because at the end of the day, the media has to be the fourth estate. I understand when I’m looking at entertainment or I’m watching something on TV, there’s going to be advertisements. We’re surrounded by it. I get it, but at the end of the day, journalism has to get this out their system. They have to either make their article make, tell their audience to be more, explain to their audience like look, this is an advertisement. We have to do this, we’re hyping this produce, but that’s what it is. It’s an advertisement. I understand you need the money. Whatever you want, excuse you want to have for it, but you cannot, you can not call yourself a journalist and then get paid to advertise in your journalism, in your article. That, you can’t call yourself a journalist if that’s what you’re doing.

Mike Papantonio: Yeah. Tyrel, thank you for joining me. Okay, let’s stay, let’s stay after them. Maybe they’ll get it someday.

Tyrel Ventura: I hope so.

Mike Papantonio: Stay after them on this topic. Thank you for joining me.